We finally hit the road a few minutes before 11:00am on a bright, Florida Wednesday morning after three months of planning and relentlessly spending money. We pulled into one of our favorite campgrounds, the Stephen Foster Cultural Center State Park, near White Springs, Florida, the first leg of our three-month journey, five and a half hours later. It was 94 degrees when we drove in and chatted with the friendly park ranger at the gate. This is one of the few parks where we don't have to get out of your vehicle and go inside. They have everything ready for you and bring it to your window. All a registered camper has to have ready is a driver's license to prove their age if they qualify for the Florida resident over age 65 discount.

This is our fifth visit to this beautiful park. Our last visit here had been somewhat of a disappointment as the normally lush vegetation between campsites had been completely cut back, leaving the normally secluded campsites naked and barren, the area between campsites strewn with dead vegetation. It has been ten months since we last visited, and the palmettos and wax myrtles have made a valiant comeback. They are now well over knee-high, but I doubt they will ever reach maturity. They'll probably get whacked again just about the time I think they have regained their mature beauty. It's pretty here when everything is green and growing, instead of spread across the campground in a brown, dying morass of coarse mulch.

We are only here one night this time as this is a great half-way break in the trip to Athens, Georgia. We have made the ten-hour trip in one day several times, but it is far more relaxing to stop and listen to the bells in the carillon, wander around among the beautiful, moss-draped live oaks, and wander down to the root-beer colored Suwanee River, breaking the trip into two days. Besides, this is the first day of a three month excursion, our very first extended vacation. A nice way to start the vacation and see if the money spent was worth it. 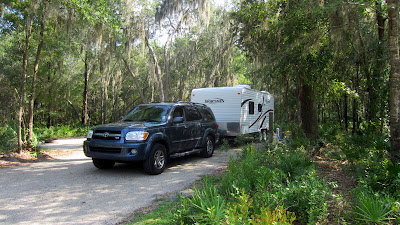 We awoke about quarter to six in the gray darkness of early morning. That is the time of day you can't really tell if it is going to be sunny or overcast, just that night will soon be over. I knew it would be a great day as I soon found my torsion bar pipe tool I thought I had left behind in Port Charlotte. I can't remove or adjust my trailer-hitch load levelers without it. We even called the young man who is going to mow our lawn to watch for it in case I left it laying in the grass where the trailer was parked. I'm sure it wouldn't do his lawn mower any good to run over that pipe. It also puts my mind at ease about my planning and checking details before we left Florida on our first three month camping adventure.


We had already had one scare when we couldn't remember where we packed the wine. Talk about a scare! We found the box of with several bottles of liquid refreshment right where we put it. Of course, we put it where we would remember where it was! Wrong! We found it eventually, by accident, of course. The camper simply isn't that big.

Ilse fixed coffee and we both had a leisurely bowl of cereal before walking the dogs around the quiet, almost lifeless campground. No one was stirring. By 7:45 we were ready to roll, and after the “over and under” trailer check, we rolled over to the nearby dump station. We were serenaded by the morning chimes from the landmark carillon announcing 8:00 am as I took off my rubber gloves after unhooking the sewer drain pipe. We were ready to roll. As far as the closest gas station, anyway.

We had deferred tanking up when we got off I-75 the day before as the first gas station wanted $3.45 a gallon! We had topped off in Port Charlotte at $3.24, and paid $3.15 a gallon just north of Tampa. We assumed this station was just an Interstate ripoff and waited until we talked with the friendly ranger at the main gate. She advised us to use the station she used regularly, just up U.S. 41 from the park. We were surprised to find every station we passed in the area to be the same, $3.45. We had an ominous feeling about the price of gas for the trip, a $.30 jump per gallon in one day is scary!  Our next fill-up in Douglas, Georgia, brought a sigh of relief. Everything was good again as every station in the area was charging $3.15. We hoped the expensive bubble around Lake City and the surrounding area would be an anomaly.

We rolled into our daughter's place outside of Watkinsville at 4:00 pm after seeing wild turkeys on the roadway, and a pickup truck in front of us brake hard to miss a deer that decided to bolt across U.S. 41 at 11:00 in the morning.

Thursday was weird-driver day. We saw enough bad drivers to write a chapter or even a whole book about. When you are towing a travel trailer at 60 miles an hour in Interstate traffic that runs 10 to 20 miles an hour over the posted 70MPH limit, you get a ringside seat to stupidity. From drivers who are obviously impaired, running off the road on both sides of a three-lane roadway, to drivers who cut across all lanes of traffic to make an exit, we saw enough to make us want to park and rest a while.

Now that we're parked safely in the driveway at our daughter's place, that's exactly what we'll do. If I remember where we put the wine.

Next: Why you never carry bicycles on a rack in the back of your RV, at:
http://sleepstwo.blogspot.com/2012/06/northbound-seriously-northbound.html