After several days of hiking and walking shorter trails to build up our stamina, we decided today was the day to descend the Waterfall Trail to both Cherokee Falls, the midway waterfall, and Hemlock Falls at the base of Cloudland Canyon. It turned out to be the highlight of our stay at the state park, and not nearly as cataclysmic as we had been led to believe by several of the campers we talked to about the trail. 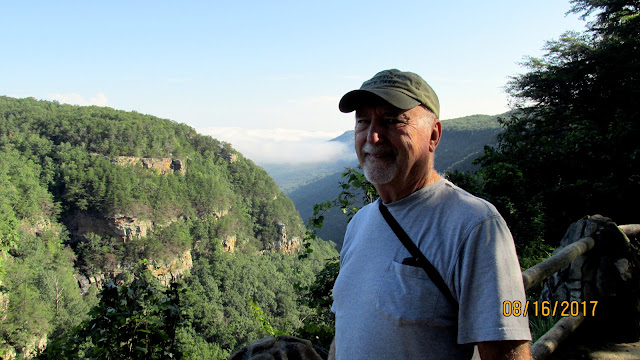 Most of the descent/ascent is on a metal, grated staircase, with the longest section without a terrace about fifty steps or so. Wooden decks act as terraces, several have benches so people like us can sit and recuperate and watch young people run up and down the staircase like gazelles. There are sections of the trail, however, that are reminiscent of the root/rock West Rim Trail and require attention to where you place your feet. 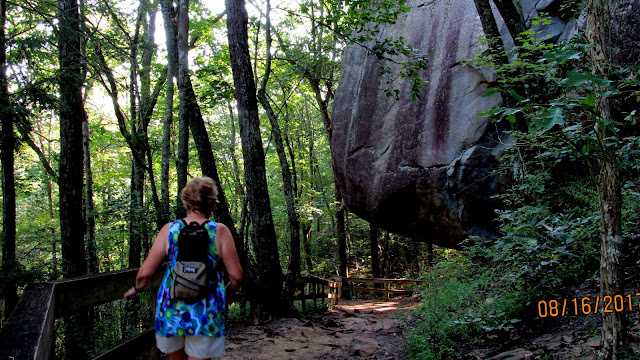 I certainly wouldn’t call the trail easy, taking us over two and a half hours to do the almost two-mile round trip, but there were people on the trail who acted as if it were personal training run. The trail map has it listed as strenuous and advises against taking pets because of the metal gratings. The 600 steps to the Hemlock Falls at the bottom of their staircase were far easier on us overall than the cumbersome root/rock trail of the west rim, but still, descending down 400 feet, then hiking back up to the rim is a test of knee health, thigh strength, and a healthy heart. Bring plenty of water. We carefully maneuvered the damp, rocky approach to the Cherokee Falls, the half-way point of the trail, and watched a young woman relax on a boulder on the far side of the collection pool. She had politely passed us earlier on the descent, and now was enjoying sticking her feet in the cold water. She wasn’t hiking the trail, she was running it. Her name is Vicki, and she works as a nurse in Chattanooga. She chatted with us twice on the trail – we met her again on her way back up from Hemlock Falls – and is one of the several people we met who take advantage of the park and the trails every chance they get. After saying goodbye, Vicki quickly disappeared up the steep staircase. 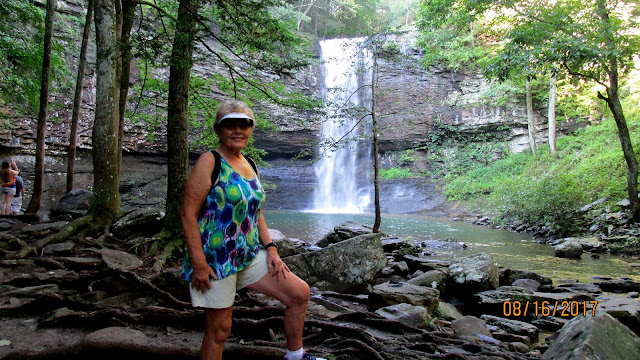 Cherokee Falls is a pretty, 90 foot high waterfall, with no cascades, and a pretty collection pool at the base. It is well worth the hike. 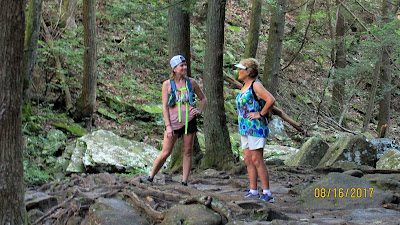 As Ilse and I leave Cherokee Falls, we hesitate as we look down the long, twisting half-mile staircase to the Hemlock Falls below. An elderly gentleman, older even than me, excuses himself as he climbs past us, hiking poles in hand. He greets us with a robust smile and I can’t help but think this is what keeps him young. 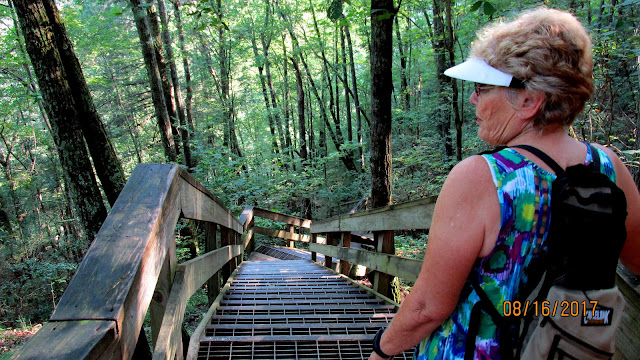 We soon reach the platform overlook at the beautiful Hemlock Falls and once again take out our water bottles. Hemlock Falls has the shorter drop of the two waterfalls on Daniel Creek, about 60 feet, and is also a pretty waterfall, but the pool is not accessible as is the pool at Cherokee Falls. We quietly sit on the wooden bench and absorb the sounds around us, dominated by the constant crescendo of the waterfall. We are soon joined by two young women who climb past the overlook to walk along the water’s edge under the lookout platform.
I have always considered myself a purist when it comes to the environment, but as we sat in silence on the bench at Hemlock Falls, looking at the huge boulder on the edge of the pool, I couldn’t help but think of the marvelous statue of the Cherokee warrior who stands in the North Carolina Arboretum. If I had an endless supply of funds, I would commission that statue or one just as meaningful, to be mounted on top of the boulder on the edge of the collection pool facing the waterfall. I can not think of a better place. 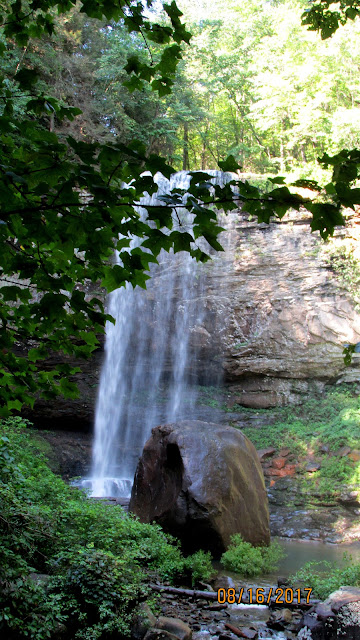