Northbound for Easter - Back to Fargo 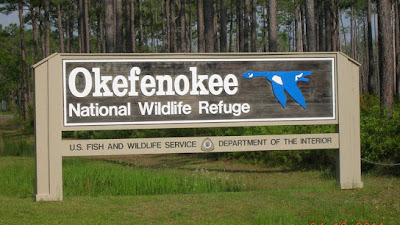 I get this silly urge to sing Willy Nelson's "On The Road Again" every time we head out with our travel trailer in tow. Just part of the routine, I suppose, but it happens every time. I don't even give it any conscious thought. Ilse just starts laughing and I know I've stepped into the realm of RVing once again. This time we are headed up to Athens, Georgia, to see Monica and Troy, our daughter and her husband, and their daughter, Claire. We'll be there the week of Easter vacation so we get the grand duties of baby-sitting Claire during the school break.

We decided to leave late Good Friday morning and make it a two-day trip. It's easier that way, even though we did the 580 mile trip in one day the last several times we traveled. We have a favorite campground right at the half-way point of the trip, so we thought we would stay there Friday night and start again early Saturday morning. I checked the Internet and logged on to Reserve America at http://www.reserveamerica.com/, the account I use for on-line State Park reservations, to check Stephen Foster Cultural Center State Park at White Springs, Florida for openings. No openings, not a single one. The pretty, easy access Florida park was booked solid. Its location near the intersection of I-75 and I-10 makes it a great one-nighter for the flood of RVers headed north at the end of another winter season. A quick check of the other Stephen Foster State Park, the one near Fargo, Georgia, showed plenty of sites available. 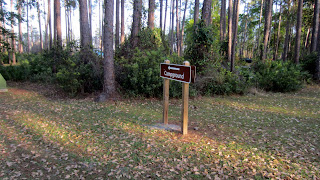 Fargo is 65 miles northwest of the Florida park, and unless you're traveling on U.S. 441, it is rather inconvenient. Camping reservations made on-line for a single day over a weekend result in a two-day minimum charge, so we decided simply to drive up and check in at the park. They only charge for one night's stay if you show up and do it in person. We were taking a slight chance, however, as this is the peak season for the popular Okefenokee park. They do 80% of their business during March and April. Luckily, the camp ground was less than half full when we got there. They had both loops open this time, something we hadn't seen before. 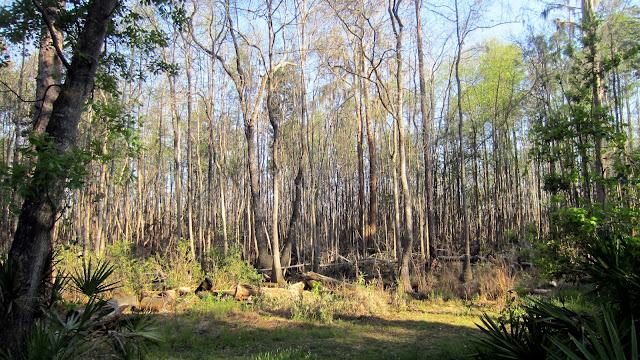 We were lucky to get there. We were almost taken out when a tandem, 18 wheeler strayed into our lane just out side of Gainesville on I-75. I don't mean just up against the white line, I mean half way across our lane. Luckily, I had a break in the heavy, bumper to bumper traffic and swerved our trailer into the vacant outside left lane to avoid being torn up by the thoughtless behemoth. If I hadn't had the lane to serve into, we would have been hit hard at 65 miles an hour. We wouldn't have made it to Fargo.

I hate the Interstates when I'm towing the trailer and will gladly accept any reasonable alternative. U.S. 441 from Lake City, Florida, up through central southern Georgia is the perfect answer. The only problem is getting to Lake City from Port Charlotte. I just bite the bullet, take a couple of aspirin, and stay in the right-hand lane of I-75, except when I'm dodging morons who shoot down the entrance ramps and pull into heavy, fast moving traffic without once looking anywhere but straight ahead. Amazing there aren't more horrific crashes than there are. The Interstate portion is only four hours or so, but it is enough for one day.

We pull through the main gate of the Okefenokee Refuge right at 4:00 in the afternoon, and notice two things different from our last visit: The horrific forest fire that closed the park for months two years ago changed the slash pine forest dramatically, and they have had more rain than expected. Water is high for the first time in years. There is a six foot alligator lying by the side of the road as we pull into the trading post/park office.The campground area was spared from the devastation of the fire, but a Ranger told us the once heavy tree canopy surrounding the lake is completely gone.

The young lady working the computerized register system has all sorts of troubles and the registration process takes about twenty minutes. While we wait on computer responses that must eventually be corrected, a young man standing impatiently at the counter rather arrogantly asks if they have any alligators here. A woman behind the counter doesn't say anything, she simply looks out the window. I can see three of them lying on the bank by the boat ramp and two more swimming across the small lagoon. The tourist, with a New York Sweatshirt, doesn't catch the hint and assumes he is being ignored. He mumbles something under his breath and walks off around the gift shop. All he had to do was look up.

Again, the toilet/shower facilities are spotless, and except for the first swarming wave of new born mosquitoes, are a pleasure to use. The park uses the Georgia system of assigning a camping pads according to the length of your camper and allowing the individual camper to pick any empty pad with the appropriate color designator. We drive through both loops until we find an orange colored site that is convenient to back into, and twenty minutes later we have a glass of wine to celebrate a safe first day on the road. Later, we walk the dogs, staying close to the camper, no reason to look for trouble, and hook up to the community TV antenna. Oddly, it is warmer here than back in Florida.

So far so good, I'm still whistling Willy's song about being on the road again.. No Interstates tomorrow, I have even more reason to whistle.