Anastasia – Third Time is a Charm

We planned our third visit to Anastasia State Park just outside St. Augustine, Florida, to coincide with a full moon. The brilliant, full Florida moon rising out of the Atlantic Ocean over the expansive, empty beach that stretches to the horizon, tempted us to try for yet a third time. The two times1 2we have camped here in the past during a full moon left us with wonderful memories. But, as always, timing is everything!

We checked on-line reviews of the popular park while we patiently waited as Hurricane Chantal teased the northeast Florida coast before finally fading away, drenching the Atlantic coast as far north as New York. Ilse and I thought we might have to delay our arrival in northeast Florida, but Chantal obligingly allowed us to make the trip on schedule, leaving behind only occasional Florida showers. It was a six hour trip up from Port Charlotte. I avoided all Interstates, using only state and county roads. It was a marvelous, unstressful Sunday drive, and we were set up in the Sea Urchin loop, a first for us, in site 77 well before dinner time. 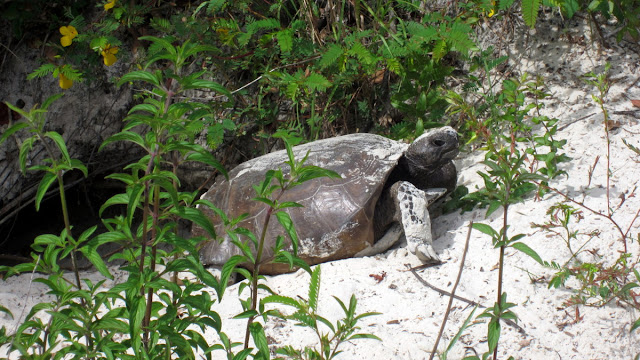 We read several comments about many of the campsites having no drainage, or worse, the drainage ending up in the campsite itself. Having never been caught in a deluge here, we were concerned about our unknown campsite. The hard-packed, sand-based sites here, are mostly flat, but only one or two are paved in the entire 139 site campground. Some though, are a little quirky in their layout.

The first six camping loops, sites 1 through 105, have better privacy than the newer seventh loop 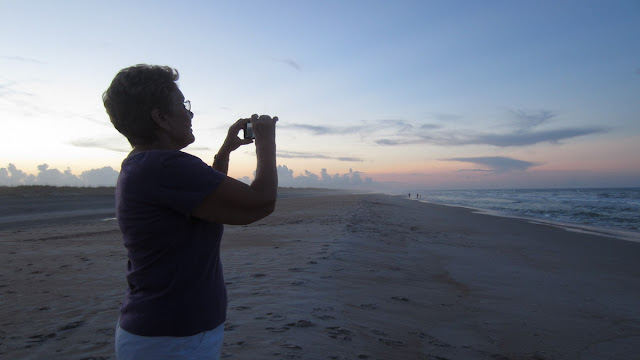 The toilet and shower facilities are clean and well maintained as always, even after the hoards of toilet-paper-stuffing children blocked up all three commodes in our men's room on Sunday. The toilets were spotless just a few hours later. 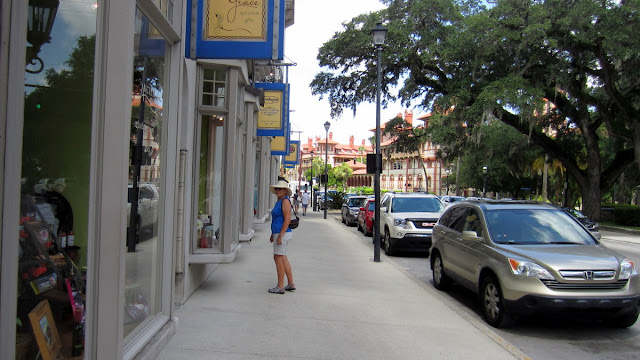 Our first day was spent catching up on reading and just relaxing. Intermittent rain showers made it comfortable just to stay in the camper anyway. Getting ready for a two month long camping trip is hard work. Putting up hurricane shutters and closing up the house, prepping the car and trailer, planning the food and itinerary take time and effort. Why is it so much work to have fun? Monday was spent as the relaxing first day of vacation, after an early morning walk to the beach, of course.

Tuesday was the start of the real vacation. With sunshine and mild temperatures, I unloaded the bicycles and finally got into vacation mode. We eventually drove to town, did some grocery shopping and had Thai food for lunch. Well, it was supposed to be Thai food. I think it was just a matter of taking the correct numbered meal out of the freezer, putting it in the microwave according to instructions for whichever meal we ordered, punching a couple of buttons and serving it piping hot! Yum!


We got to do things we never had time for in the past. First on the list was a visit to Fort Matanzas National Monument, just a few miles south on famous US A1A. The weather held on Wednesday for our free boat ride to the small, but impressive fort that only fired its cannons in anger once. We had seen it from a distance when we brought a boat from St. Augustine to Ft. Myers way back in 19993, but only the teasingly far-off view as the Inter-coastal waterway passes on the other side of Rattlesnake Island from where the Spanish thoughtlessly built their fort hundreds of years ago.


We decided to check out Gamble Rogers State Park, some 30 miles south, as an alternate to Anastasia if we need to park our little trailer somewhere else. We were already south of St. Augustine, so why not take a look. Scratch Gamble Rogers, it isn't for us. We got back to camp just before the afternoon rains started.

We had a hint things weren't going to go as planned on Wednesday when storms really began to roll in. By Friday morning, it was obvious the comments on the Internet were accurate as some campsites had been flooded more than once. Most of them drained within hours, but some sites, such as 67 and especially 81, were under ankle-deep water for many hours. Definitely not for tent campers!

We met Susan, from Naples, on Friday night after she backed in to site 81 and set up her tent. The original reservations had been canceled so she picked up the spot for a one-night stay. It rained almost as soon as she was set up, but it was a light shower and the water didn't encroach her tent. We later sat outside our trailer in the pleasant, but moist evening air as the sites drained and chatted well into the night. We joked about drying out the tents and bedding, but by the next morning it wasn't a joke. We had a torrential downpour just after she packed up and site 81 was soon under four inches of water.

Saturday night was an adventure, to say the least. Ilse commented on a sign she saw on the nearby Elks marquee that stated “Sat - Latin Dance.” So, we planned to stop by and see what was happening.  The adjacent St. Augustine Amphitheater was holding a concert by Sublime at the same time, so A1A, the street outside the park was jammed with police and flashing lights by the time we headed to the Elks club. The Elks parking lot was full, but not for the Latin dance. Turns out the dance had been held the previous weekend. They didn't take down the sign until the day before we showed up looking for some Salsa. The Elks club itself was fairly empty, save for a few regulars who looked at us nonchalantly as we walked in. The Elks make extra money by providing extra parking for the amphitheater.

We met Shirley, a thin, attractive blonde who was fending off the hands of Jack, somewhat heavier and younger by several years, as he tried to win her favor, obviously with Braille. Ilse and I sat next to them at the bar and ordered two gin and tonics that had to be thrown in the drain as the tonic water dispenser turned out to be empty of anything that vaguely resembled tonic water. The White Russian Ilse ordered as a substitute turned into a Miller High Lite beer when it was discovered their milk for the mixed drink had expired. It didn't take long for the bar to empty out. Not a real good night so far. Not for Jack either. Shirley kept telling him he wasn't going home with her and she wasn't going home with him, either. He kept asking, "Who hurt you, baby?" Poor Jack. We had free popcorn and played the jukebox. At least we got to dance to Patsy Cline. Not a real hot time in the old town that night.

We eventually made four trips to the beach without seeing sunshine even once, and the unending cloud cover made sure we didn't see any hint of moonlight during the full moon. Not until 3:00 am the next Tuesday, anyway.

So, even though we didn't get to see our full moon, we have had a great time. Tourists have a knack for crowding me out of anywhere they decide to congregate, and St. Augustine in the summer is a prime tourist attraction. We have another week here, and plenty of things to still see and do, depending on how much rain we get and how well we squeeze past the crowds.

We'll come back to St. Augustine, one of our favorite places, probably in time for the Christmas lighting ceremony in November. I'll have to see when the full moon occurs in November. We'll try for four, the third time didn't count.

[Update Note: Full moon will occur November 17th, 2013; the Lighting Ceremony will be the Saturday before Thanksgiving, November 23, 2013.  Festivities start for one of the best lighting ceremonies in the country (per National Geographic) at 6:30pm]

NEXT: On to Asheville, NC, and a great discovery, at:
http://sleepstwo.blogspot.com/2013/08/pleasant-surprise.html