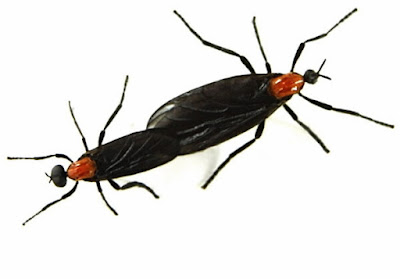 "With numerous variations, it is a widely held myth that University of Florida entomologists introduced this species into Florida. However, Buschman (1976) documented the progressive movement of this fly species around the Gulf Coast into Florida."

The preceding quote is from the Featured Creatures pages of the University of Florida web site listed above, absolving the Gators from any wrongdoing in the introduction of this odd insect into our daily lives in Florida. Well, twice a year at any rate as they embed themselves into the grill and windshield of any moving vehicle traveling Florida's highways in April and May, and again later in the year during August and September. The common rumor is the University of Florida accidentally released a genetically modified bibionid fly and created this ecological disaster. The rumor is sworn to by any graduate of rival Florida State University.

They are strange insects indeed; they thrive on carbon monoxide and heat, and where better to find that combination than swarming windshield-high over Florida's highways in the blistering heat of late spring and summer. The only month recorded in Florida where one can travel absolutely Lovebug free is November. The U of F web site continues:

"The adult flies are a nuisance to motorists because the flies are attracted to highways and spatter on the hood and windshield of vehicles. Large number of lovebugs can cause overheating of liquid-cooled engines by clogging radiators. They can also reduce visibility, and etch automobile paint as the body fluids are slightly acidic. If the egg mass and body parts are allowed to remain on the vehicle for several days, bacterial action increases the acidity and etches the paint. A soaking with water for about five minutes followed by a scrubbing within 15 to 20 minutes should remove most of the lovebugs without harm to automobile paint."

Massive 18 wheel trucks have been forced off the road by these insidious insects as their splattered bodies pile up in layers on truck windshields so thickly they completely block the driver's vision. European tourists and people from Wisconsin get out of their rental cars and wonder what the devil kind of cloud they just drove through. Gas stations run out of water and soap and windshield cleaning squeegees by two in the afternoon every day. But, hey, other than that, we had a grand time revisiting Kissimmee Prairie Preserve State Park, located just the other side of the Jurassic Time Warp some 33 miles northwest of Okeechobee, Florida, in Florida's real cowboy country.

We celebrated our new travel trailer's fourth anniversary with a three day stay at this oddly different State Park from Sunday evening, April 12th, until Wednesday, April 15th, almost four years to the week since we baptized our Sportsmen 21 foot unit with our very first stay at the Kissimmee Preserve
http://sleepstwo.blogspot.com/2011/05/kissimmee-prairie-state-park.html

My secret desire was to get a photo of the Crested Caracaras that are common in the area, one of the few places this magnificent bird nests in the United States all year round. I saw two on the road on the drive in to the park, but I wasn't fast enough to capture any images with my camera as they flew away. No matter, there were plenty of subjects to keep me busy, from crawfish crawling across the campground after a rain, to a Cottonmouth Water Moccasin that simply wanted to cross the road.

Sharon, our camp host named the snake "Maury," and seemed relatively unconcerned about her personal safety, just making sure we didn't harm it as one moccasin had recently been killed by a camper, something that is strictly forbidden in the preserve. [Update: Maury was successfully removed to a different, unpopulated area of the preserve by Florida State Park Rangers. Any poisonous snake is removed from parking or camping areas by Rangers as standard safety policy].

It is a unique place, not one most tourists would enjoy unless they are looking for absolute solitude, bird watching, or when the conditions permit, stargazing. Well, almost pure solitude. A run to the nearest town, Okeechobee, is a 33 mile trip, Sebring, in the other direction on Highway US 98 is also about 30 miles. In between the Kissimmee Prairie Preserve State Park and Sebring is the Avon Park Air Force Bombing range, and combat jets on afterburners can occasionally be heard during daylight hours. With the new electronic scoring systems, the environment is spared the old explosions from ordnance actually being dropped into the flat, Florida prairie. Never once did I actually see any aircraft, although they could be heard most mornings in the far distance to the west. They didn't deter the abundant songbirds that continuously serenaded us as soon as the first ray of sunlight peeked through the clouds on the horizon to the east.

The trip to the park was uneventful, but we did take a long way round as I had never driven up the west side of Lake Okeechobee and I wanted to see what I had missed. We drove across most of west Florida on County Road 74 from Punta Gorda to FL 29 just outside Fisheating Creek. Highway 74 is an arrow straight road with only one stop sign the entire 45 miles or so. We come back this way from Miami when we want to avoid I-75. A left turn onto Highway 29, then a quick right onto the four-lane divided U.S. 27, and we headed toward Moore Haven. We turned left on to FL 78 before reaching Moore Haven and headed north toward Lakeport. A nice two lane road, but not as scenic as I had hoped. Not much to see except the rim of the flood control dike that rings the lake. We turned onto FL 721 and drove through the Brighton Miccosukee Indian Reservation en-route to the State Park. We were thrilled to find Garmin has corrected their GPS maps to avoid the platted roads that were never built. We saw our first Caracara on 721 just before the park. 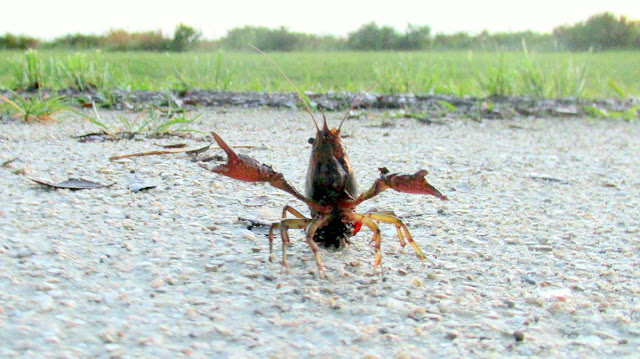 The park is unchanged since our first visit four years ago. The campgrounds are clean, dry and well kept. The showers and toilets are spotless as they were last time and once again, we had only three other campers to share the entire campgrounds during our four day stay. We met Sharon, the camp host and after a good evening walk, headed into the camper to avoid a good, solid three hour rain storm. Drainage is great and we had no problem.  We did meet a crawdad, or crawfish, that wandered through the parking lot.  I'm sure he ended up breakfast for one of the many crows or hawks that were abundant. 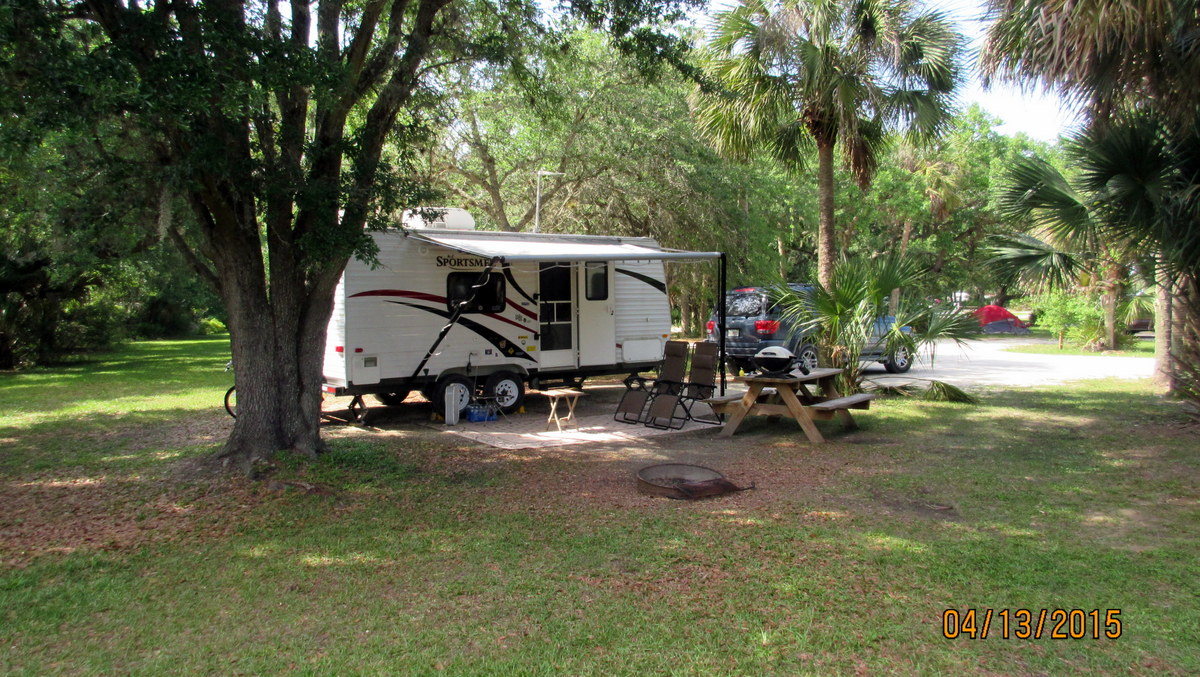 We did make one quick trip into the town of Okeechobee, some 33 miles south, but the Toyota was only moved that one time in four days.  A relaxing mini-vacation that we'll do again. We just won't wait 4 years to come back. I'll just double check to see if the love bugs are swarming.  Either that or we travel at night. 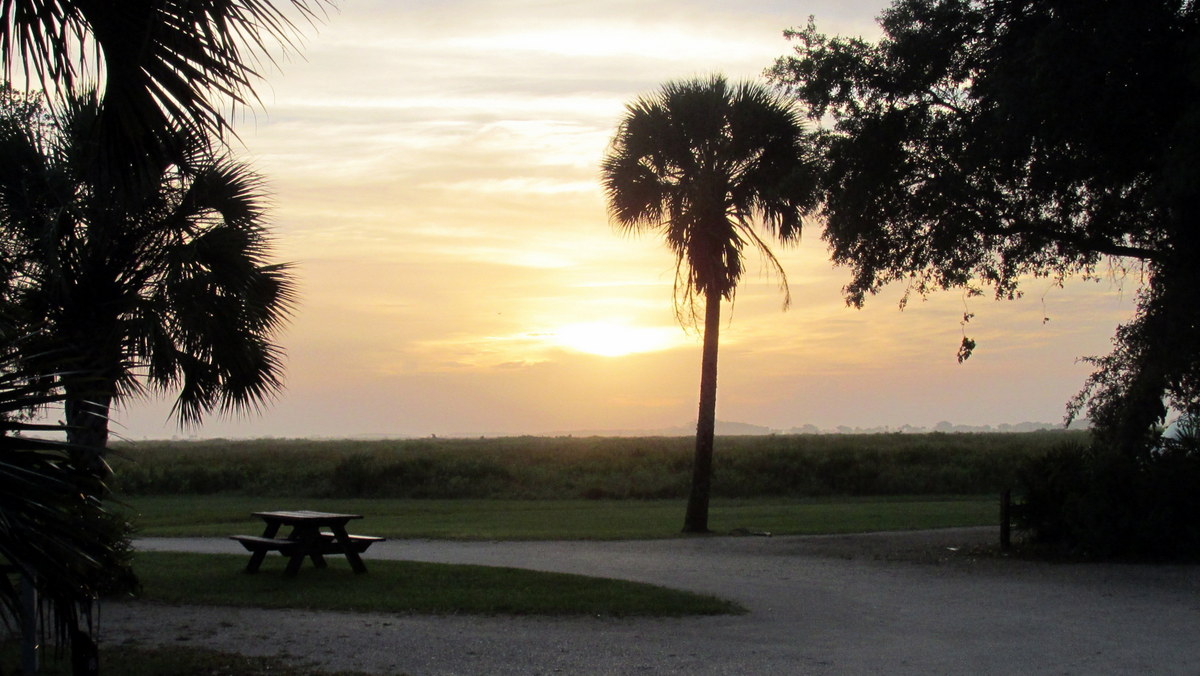 [Update:  On Thursday, April 6th, 2017, the area was hit with a violent, unexpected storm containing a freakish tornado, which ripped through part of the campsite destroying two campers, a 5th wheel and a Class C on pads 19 and 20. Those are the two pads depicted in this blog. Florida State Parks and the wonderful people at Kissimmee Prairie Preserve State Park, along with the marvelous volunteers and Friends of Kissimmee Prairie Preserve State Park, have cleaned up and repaired the facility to its original state. We look forward to yet another visit - The only reason we weren't there was the sites were already reserved.  George]

NEXT: New campgrounds and State Parks as we head north to the Georgia Mountains once again, at:
http://sleepstwo.blogspot.com/2015/08/experience-and-planning.html