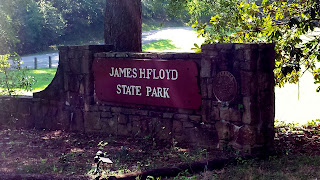 While we were camping at Cloudland Canyon State Park, on the top of Lookout Mountain, people asked, “Where are you headed next?” The responses we got ranged from blank stares to looks of outright surprise. We began to have doubts about the campsite reservation I made at James H. “Sloppy” Floyd State Park near Summerville, Georgia, back in April. I picked the park based on its location and campsite availability in late August, and the fact it was located in the nearby Chattahoochee National Forest.

As we drove down the center of Lookout Mountain from Cloudland Canyon – it’s really a long, thirty-five mile plateau – headed south toward our next campsite at Sloppy Floyd, Ilse and I both became apprehensive: we had no idea what to expect at our next campsite. Quite honestly, the name of the state park did nothing to whet our enthusiasm. 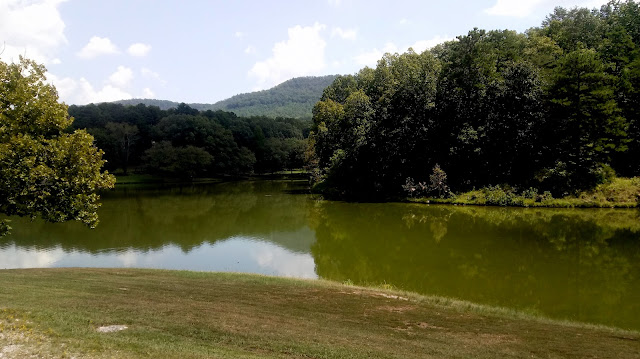 There is a subliminal message in the park name “Sloppy,” even if it is named after the speaker of the Georgia House of Representatives who served from 1953 until 1974. The nickname “Sloppy” just doesn’t inspire enthusiasm. His reputation doesn’t either as he’s nationally famous as the Georgia legislator who defiantly walked out of the Georgia State House when Julian Bond, the first black elected to the legislature, was sworn in. Was ‘Ol Jim sloppy all the time or just on the farm? Or, maybe only while working in the State House? More importantly, does the state park actually represent the name?

Turning onto Sloppy Floyd Lake Road from US 27 does not alleviate any fears, at least not until you get to the sign announcing the park. From there on, it is one of the prettiest Georgia state parks we’ve seen. Large, well manicured woods with picnic shelters surround two small, tranquil lakes that even offer several paddle boats. The office has free WiFi – which we didn’t have at Cloudland Canyon - and has standard park business hours. The WiFi proved to be weak and highly intermittent, but we occasionally got on the Internet without burning our precious data usage on our cellphone. 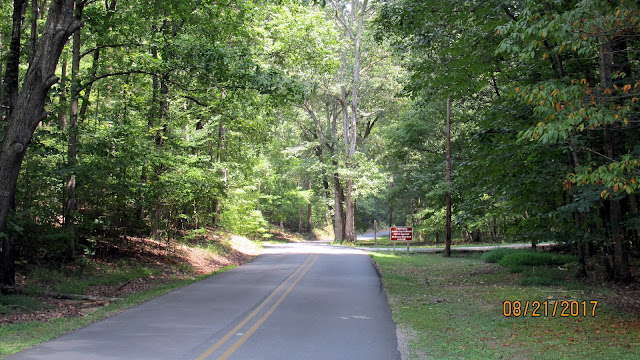 The park offered a half-price discount for camping sites during August, which I assume means they aren’t as full as they would like to be. It also meant I got half of my money back when I checked in early Monday afternoon, in addition to the twenty percent age discount that you can’t get when you make reservations on-line at reserveamerica.com.

I knew was it was a smaller state park than the one we left, with only twenty-five sites, although nine of those sites are spacious pull-throughs. It is located just south of the bustling town of Summerville on US Highway 27. At over 1000 feet lower than our last campsite, it is quite a bit warmer than on top of the mountain. The park has no main gate. All of the facilities, including the campsite, four new, state-of-the-art cottages, and the picnic areas, are accessed from the rather narrow, twisty, lake-side county road that traverses the park. 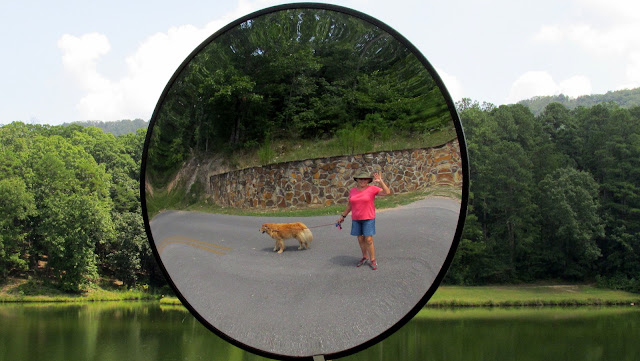 The campsites and the park itself are a pleasant surprise. The twisty, narrow one-way access road to the campsites flattens out on top of the hill and campsites are spread in such a manner that gives everyone privacy, and yet easy access. The only shower/toilet facility is old, but spotlessly clean. 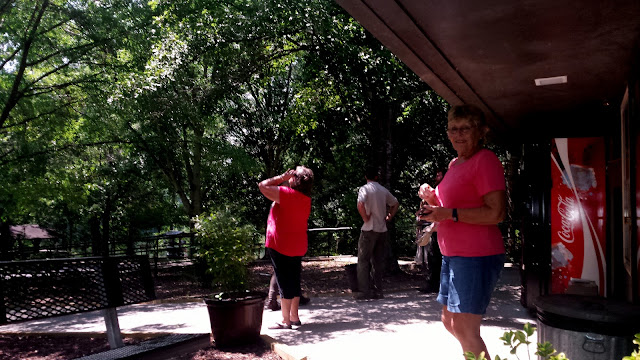 We backed into our reserved site 14 – this is one of the few Georgia State Parks that use the pre-selected site method – and within an hour were setup and fixing lunch. We even had time to drive back to the Visitor Center just as people began milling around outside the office as the highly anticipated Solar Eclipse got underway. Rachel, the young ranger who checked us in, lent everyone her certified viewing glasses and we all got to see some part of the eclipse. Someone quipped at the height of the eclipse – which looked more like a really cloudy day – that they could hear crickets and it was surely several degrees cooler. Smiles all around as everyone enjoyed the moment.

We walked over four miles on the paved parks roads on Tuesday before it got too hot, then drove into nearby Summerville after lunch to stock up necessities. We also stopped by a local auto parts store to order two new gas-pistons for the rear lift gate on the Sequoia. Believe me, when they fail, getting anything out of the back of the car becomes a nightmare. I watched a you-tube video made by an amateur mechanic about replacing the pistons just to make sure there weren’t any procedures I wasn’t aware of. The you-tube “mechanic” propped the heavy lift gate open with a piece of PVC pipe. You know, the plastic, flexible water pipe used for sprinkler systems. I couldn’t help but wonder if he is still hospitalized. Perhaps he isn’t, but I have no doubt anyone who emulated him may either have been decapitated or currently plays the role of Captain Hook in Peter Pan. 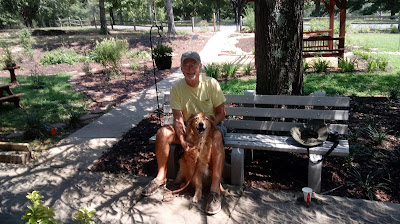 We did the Marble Mine Trail on Wednesday, and since the trail is based on an old gravel road, we took Taz along for the hike. While the condition of the trail is no problem, the angle of the roadway sometimes requires unexpected water breaks. The old mine isn’t awe-inspiring like the vistas at Cloudland Canyon, but it is still unique. 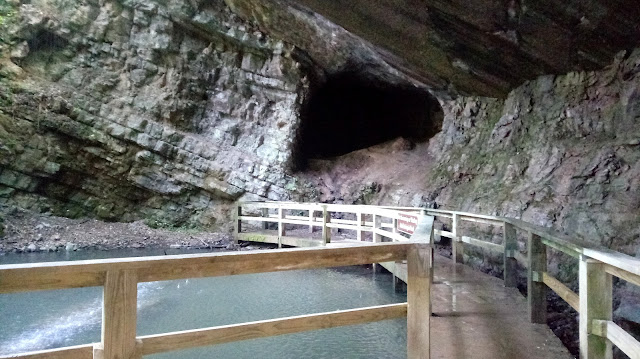 All in all, James H. “Sloppy” Floyd State Park gets high ratings from us. Cloudland Canyon has its vistas and Vogel has two – count ‘em, two! - miniature golf courses so both of those parks are at the other end of the tourist spectrum. This is where you kick back for a couple of days when they crowds head back to the city. Don’t expect the throngs of Atlanta license plates here. A great place to enjoy the dog days of summer. Nobody here but the locals, and those who know not to judge a book by its cover.

Next: Headed South, Sort of...