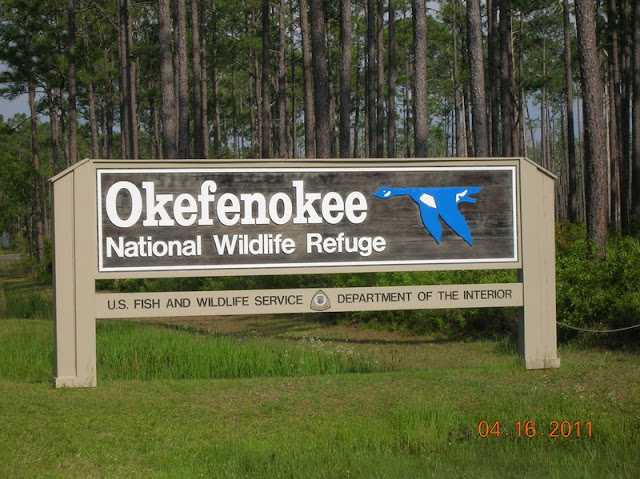 Our first trip to the Okefenokee Swamp was just going to be a one night stop-over as we headed up to see our daughter and son-in-law in Athens, Georgia. This was our first long-distance haul, so to speak, headed up from southwest Florida, and we didn't want to try to cover too much ground in one day. I picked the Stephen C. Foster State Park near Fargo, Georgia, as it wasn't too far off US 441, and was about halfway to Athens. I made reservations for just one night. Since we weren't Georgia residents, the fee was $20.00. 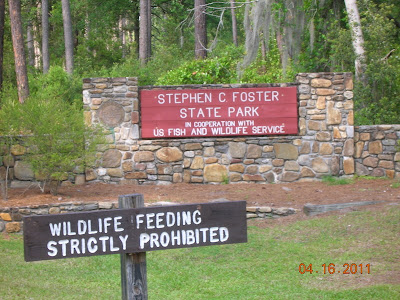 It took two gas stops, six and a quarter hours to cover the 313 miles, which for us was an adventure in itself. Our two dogs did really well, but only after the first 100 miles though, as Daisy had a melt down in the beginning. It didn't bother Taz in the least. The ride was as pleasant as any Interstate trip can be when towing a trailer. We got off the wonderful world of unconscious drivers just below Lake City, and picked up US 441, which we eventually followed all the way to Athens. The only detour we took was the 17 miles off the highway to the Stephen C. Foster State Park not long after crossing the Georgia state line. 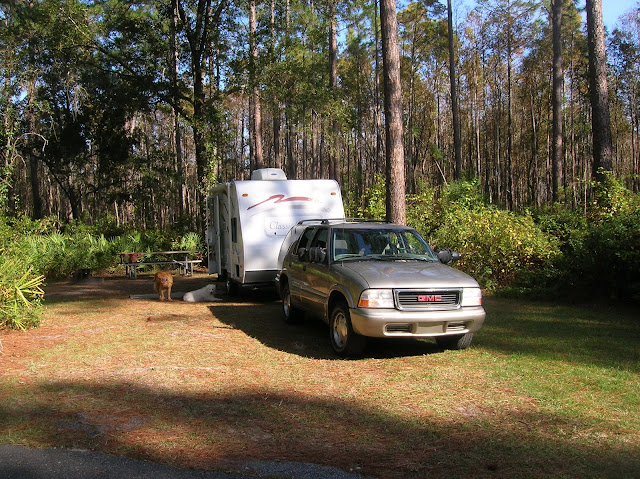 The road into the park has a beauty of its own, if you understand Longleaf Pines Forests, or as they are known by southerners, Slash Pines. The campground at the dead end of the access road has two loops an offers good privacy.  Sites 1 to 26 are in the first loop, sites 29 to 68 are in the second loop.

We went by the Trading Post/office to pick up our paperwork. We were given an orange tag with the date on it, and told to pick any available open orange-tagged site and simply back in. Just place the tag they give you in the holder in front of the site and that's it! We drove both loops of the narrow, twisty access road twice before picking a site we thought was perfect.  After backing in and leveling the trailer, we cranked out the awning and relaxed. We didn't unhook the trailer as we really didn't plan on any side trips and we just wanted to leave in the morning with a minimum of effort.

Whitetail Deer were everywhere. They were on the roads between the cabins, in the open areas, and even on the camp sites themselves. They watched warily as we walked along the shady access road to the visitor's center. Since there were very few campers, and they were scattered around the campground, the deer practically had the entire park to themselves. 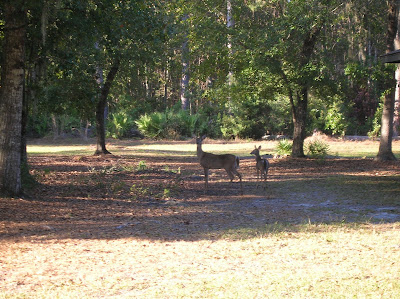 After collecting as much information and as many fliers as possible at the visitor's center, we strolled around the gift shop and I broke down and did something I never thought I would do: I bought a cap pin. My very first one. Our friends have a Teddy Bear with two scarves adorned with cap pins from all over the country. The Teddy Bear accompanies them on every trip, and I think he now weighs about 12 pounds from all the hardware pinned to him. Ilse says we will have to have a stuffed alligator instead of a bear. I'm not sure what any decent, stuffed alligator would wear, but I'm sure we'll find something. An alligator would be more appropriate as there was a real six-footer sunning himself on the nearby boat ramp. He too, looked like he had the run of the place.


We walked across the wide parking area on the far side from the boat ramp with our dogs so as not to be seen from the ramp, but a middle-aged couple with a small Terrier on a retractable leash headed for the water’s edge, oblivious to the alligator laying at the bottom of the ramp. We stopped and called out to them, to warn them of the danger. The man paused and looked at us, then ignored our warning completely and continued heading for a confrontation he obviously underestimated. Luckily, his wife had more sense and rather firmly informed her husband not to take the dog down the ramp. He grudgingly hesitated, then turned around and walked back, pulling his unknowingly endangered pup behind. People who have never seen an alligator on dry land are usually stunned by how fast they can be. This alligator would have thought he was being served meals on wheels, or in this case, on a leash.

The park has a playground, an interpretive center/museum, and 9 cottages as well as the RV campsites. There is a 3/4 mile Nature Trail that has a 2100 foot boardwalk that extends toward off the raised boardwalk. The sites are all nice, with great privacy between most sites.  The sites are mowed, almost manicured, and had 30/50 amp electrical service and water. The pads were grass and gravel, level, and clean, as was the bathroom facility. It also offers cable TV, but offers only a limited amount of stations. Still, it isn't bad way out there in the sticks. We were in bed by 9:00pm, and on the road the next morning by 8:40am. The route up US 441 is great! Little traffic, and great road. We now go that way every time we tow the trailer. We will be back to this park, we will bring our kayaks next time.

Next up - Our first County Park Campground: Tobesofkee, GA
http://sleepstwo.blogspot.com/2010/09/our-first-county-park.html

If you are interested in the other Stephen C. Foster State Park in Florida, click on:
http://sleepstwo.blogspot.com/2010/09/other-stephen-foster-state-park.html

Check http://sleepstwo.blogspot.com/2015/08/billy-lake.html For our most recent visit to Stephen C. foster State Park in Georgia when we had the campground, and the lake, to ourselves..

The web site for the park is at:
http://www.gastateparks.org/StephenCFoster/