Two months to the day after we embarked on our aborted maiden voyage, we tried again.

This time, we were going to meet friends at a nearby state park for an extended three-day weekend. We thought we had covered just about anything that might pop up, and were looking forward to our first successful outing.


It was early October, but by 11:00 am., the Florida heat was a stifling 94 degrees. I had checked the campsites at the Highland Hammock State Park by Internet and picked what I believed to be a shady site on the eastern side of the campground. I thought we might be able to sit outside and enjoy our newly purchased screen room, somewhat protected from the Florida sun. Packed and ready to roll by 2:15 pm, we turned on our new GPS and keyed in the destination along with the instruction to choose a route using the least fuel. The compliant GPS immediately plotted our course and we were off. We had no idea how far off. Everything was really great as we trucked along familiar, well paved and maintained county roads headed for U.S. 17, another familiar route. We stopped once to check safety chains and connectors, tires and lights, and again were on our contented, satisfied way. Our little GPS had a proper, cheery female voice that told us to prepare to turn right in plenty of time to make the turn onto Fish Branch Road at Gardner's Landing.


The unfamiliar road was not a high quality county road, more like a residential stretch of pavement in need of tender love and care, but we obediently followed instructions from our confident little electronic friend and innocently towed our little camping trailer into an adventure we hadn't counted on. Soon, our perky GPS told us to bear right and then left, and we found ourselves going through a church parking lot. We stopped and checked a regular Florida highway map that showed a faint black line headed along the directions our electronic guidance device had told us to follow. Perhaps Chatty Kathy knew where she was going after all. With great trepidation, we slowly headed toward the far side of the parking lot. We slowly drove through the overhanging Live Oak trees on the far side of the paved lot, and through the dark, shaded botanical tunnel that shaded a road that had turned into a single lane, and sure enough, on the other side of a small bridge, the road continued. It was, however, a single lane. I thought it had turned into someone's driveway. There were a few houses, and before I could turn around, the pavement ended. Our oblivious but supremely confident GPS said in her annoying female self-confident voice, “continue for 13 miles!”

With no place to turn around except backing up five or six hundred yards, and after looking at the Florida road map, we decided to slowly and carefully motor on. How much worse could it get? We soon found out as the road turned to sand. To make it even more interesting, the transmission in the Jimmy started to slip as the temperature passed 98 degrees and it looked like it wasn't going to cool off any time soon. We found we had to keep the speed at around 35mph to keep from bogging down in the silica that is the base for all of Florida's citrus farms. Once I got the Jimmy up to speed, the transmission would settle down and pull normally. The road was still one lane, but at least with a turn to the north. We were sweating even with the air conditioning on at full cold. We were watching the moronic GPS with the stare of condemned men waiting for a governor's pardon. We could only hope we didn't meet another vehicle coming the other way. After ten minutes or so, we saw a line of trees that marked the intersection with another county road, and thankfully, this one was paved. Our GPS dutifully said, “Turn Right!”

After a few miles, we entered a narrow paved road that led to the west entrance of the park. Not finished with being absolutely wrong, Chatty Kathy told us to “Turn left” as we sat at a “T” intersection while we could see the welcome sign to the State Park on the right! So much for absolute faith in any GPS! The error with the dirt road was my fault. The mistake I had made in the original set up was to not specify avoiding unpaved roads. I didn't even know the option existed as I hadn't scrolled all the way through the setup options! The error in direction at the intersection, however, belongs to the GPS programmers. I learned to keep a current map handy at all times.


After checking in and picking up our tags and maps, we headed to our preselected campsite. Highland hammocks is a nice, open park with Florida Oaks providing shade for most of the sites. The one I had picked, however, was on the side with the Slash Pine trees and we soon found we had little shade. The sites were standard Florida State Park sites, with fire pits and picnic tables, but the park was being repaired and was due to close the day after we left. The sand access roads were being paved to match the recent addition of state of the art showers and toilets. 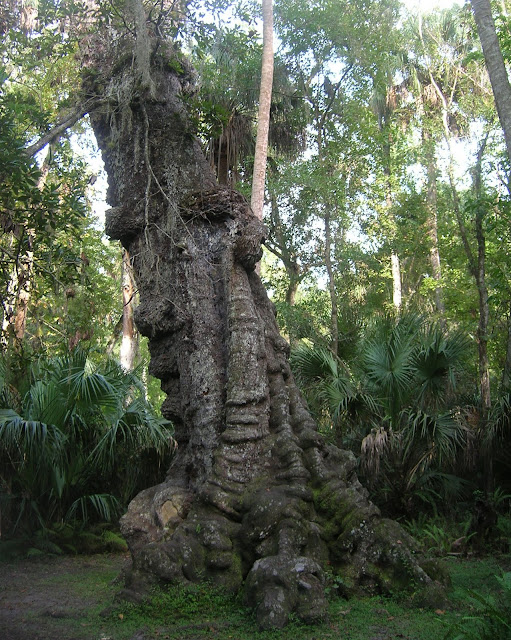 By 6:00 pm we were set up and had our second camping dinner, this time quesadillas. We didn't make much of a night of it, and after watching part of a DVD, we were fast asleep.

We woke to a beautiful, misty Florida October morning. After walking the dogs and taking a slow tour of the park, we decided to head into nearby Sebring and pick up a few groceries we had overlooked. Our neat little GPS performed as expected as it didn't make a sound as we passed the grocery store we had keyed in. It did tell us, however, to turn into an empty field instead on the way back.

I went over to the park office and moved our camp site to the shaded west side without any problem. While I was there, Bill and Barbara, the friends we were meeting for the weekend, pulled up to the main gate. They had just come in from Bahia Honda State Park in the Florida keys. They were soon set up and we all went for a bicycle ride to the museum and had ice cream. It was a marvelous evening as Ilse made dinner, and we ate at Bill and Barbs as their Class C camper with the slide out that had far more room than our little Cikira.

The evening went well and we played cards until 10:00 pm or so, but Ilse was beginning to feel uncomfortable with an old, familiar feeling. It was a bad night as she passed another kidney stone. We decided against heading to Sebring and the nearest emergency room as the pain subsided a little after 3:00 am. By morning, she was feeling better, and even though we had decided to break camp and head for home earlier, she felt well enough to wait to see if Sunday would be better. She felt good enough to take the park tram ride at 1:00 pm. We had taken the dogs out earlier for a slow, tentative stroll and walked into a herd of deer. They stopped and stared before bolting for the undercover. Our dogs were so stunned they didn't even bark. We had dinner with Bill and Barb once again, and Ilse rested most of the rest of the day.

Monday morning was a beautiful morning, and Ilse was feeling almost back to normal, except for being exceptionally tired. We broke camp and headed out, using the front gate and the Florida map instead of the GPS. But, every trip is an experience and this was no exception. As we passed over the exaggerated speed bump not far from the main entrance, the trailer jumped off the hitch and slammed into the pavement with a crunching, grinding sound that made me cringe with dread. The safety chains did exactly what they were supposed to do and we stopped without further incident. The emergency trailer brakes hadn't energized because the pull wire was set just a little longer than the chain length, but the bottom of the tongue jack had taken quite a scrapping. I used the tongue jack and raised the trailer back up so I could back the Jimmy once again under the hitch. I looked around, there was no traffic in either direction. I quickly hitched up and this time I remembered to put in the safety pin that prevents the hitch coupler from accidentally unlatching. I had left it hanging on the side of the propane tank, where I could see it and remember to put it in.


Next stop: Our third campground: One of the two Stephen Foster State parks at
http://sleepstwo.blogspot.com/2010/09/blog-post.html