We decided to take more advantage of our camper while we took our time and searched for a slightly bigger unit. We looked at the calendar and decided to pick a Florida Sate Park that was within a half-day's drive at least once a month. It turns out there are many great state RV parks that make a weekend or three day trip easy to do, no matter where you are in Florida. We picked the Myakka River State Park, just east of Sarasota on State Road  72 for our next weekend trip.

While looking for a longer camper, we have decided there is one feature we really like: The walk-around bed. The bed is mounted in the center of the camper, lengthwise with space on either side to get in or out. After a person reaches a certain age, bathroom trips during the night are not uncommon. Having to crawl over your spouse is not always easy to do, especially if you are trying not to wake her, or him. I usually end up banging my wife in the back during the process which results in groans or grunts and a “sorry, honey!”

The problem of course, is that a camper can not be wider than eight feet. Laws are like that. So, the bed must either be small enough to allow plenty of leg room on either side of the bed, or the bed can be as wide as possible with minimum space between the bed and the camper wall. We are looking at one that has a queen size bed, with small cabinets on each side of the bed as well as cabinets overhead. The trade off is a slightly longer trailer than we really want, but it looks like 22 feet is what we will have to buy if we want that style bed. One other feature we think would be nice is the new ducted air conditioning featured on many newer units. The noise reduction of having the A/C unit further removed from the interior would be welcome. But, in the meantime, it's pack and pull time, ready to go again. This time less than 40 miles. The quick jaunt up to the Myakka River State Park would be quick and easy, and besides, the weather was cooling off. At least that's what the weather people on three different channels predicted. Turns out they were all wrong.


Ilse had passed yet another kidney stone, although this time not while we were camping. She had a doctors appointment that ended up scheduled for the morning we were due to leave, but since we weren't going far and didn't have to leave until later in the day, it worked out great. She was home in time for lunch, and we finished loading the last few items, mostly for the refrigerator. The dogs were nervous as usual, but not as bad as during the first trips. We called the park to make sure the campsites weren't under water, and rolled out a little after 1:00pm. Calling the park before leaving home is mandatory during the rainy season as the park often floods and certain sections have to be closed.

We took the kayaks again, and the bikes as well as it only takes a few minutes to load or unload them, and two or three good books. As we drove north on the short section of I-75, we noticed the temperature had crept up to 90, then 91, then 92 degrees in just the 40 minutes it took to get to the State Road turn off. So much for cooler weather.

We turned into the park, one of the oldest State parks in the Florida park system, and pulled up to the modern, up-to-date Ranger station. The turn off is just nine miles from the Interstate. The female ranger opened the window and told us to park in the main lot, then walk back and take care of the details. All of the information was already in the computer system so it was a quick, painless registration.  As we drove through the overhanging live oaks draped with Spanish Moss, we noticed it was becoming cooler. The temperature under the trees was a nice 88 degrees by the time we pulled into the second camping loop called Big Flats.

The campsites struck us as almost abandoned. They were dirt sites, with a solitary palmetto palm tree log laid out as separators between each numbered campsite. There was water and 30 amp electric service, and the sites were level. Each site had a picnic table and a metal ringed fire pit. The dirt road seemed to have no border and the sites just appear to be haphazard in appearance. It had been underwater until recently, so I can understand why dead leaves and debris blanketed each site. The sites are roomy, though, and arranged in a loose figure eight so all are close to the permanent toilet and shower facility.

Setting up was no problem, and we soon had sling chairs outside and were enjoying the scenery and the solitude.  Except for the not-so-distant hum of a generator.  Not a camper's generator, but a bigger, industrial type. I walked over to the nearby permanent facility which included showers and noticed a water plant just behind the campground. The noise was coming from the water plant. The generator ran 24 hours a day so I assume it powered the water pump that supplied water to the campground. Not really that bad, but it is a constant background noise that detracts from the otherwise tranquil setting. 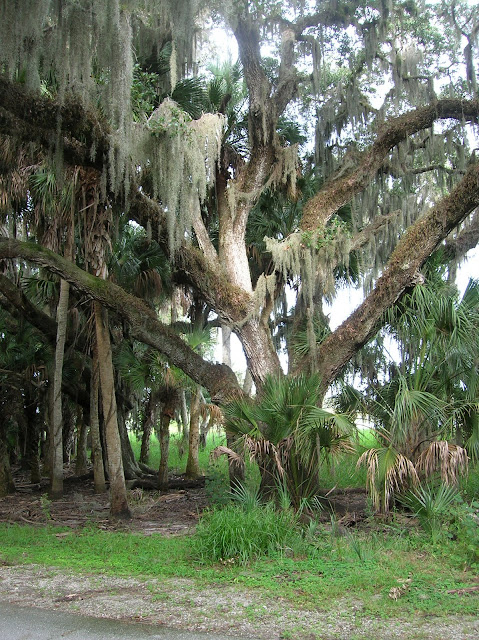 After dinner we took a long walk along the main paved road with our dogs. A small Whitetail buck walked up out of the forest and stood not 20 feet away, staring at us and the dogs. The dogs didn't bark, they just stared back. The deer eventually twitched his tail and casually crossed the road in front of us.  The mosquitoes were not as bad as at home! A quick, light spray with repellent and we were just fine. We also took a short drive to the boat basin we would paddle out of in the morning. We had to wait as a flock of wild turkeys casually strolled across the road in front of us, driving our Golden Retriever into a euphoric, almost comatose state. He probably thought he had died and gone to heaven.


We arrived at the boat ramp the next morning a little later than planned. The weather was nice with just a light overcast with the sun just beginning to peak through. Unloading was a snap and we were ready to paddle in less than 15 minutes. I took my trusty video camera for the first time as I had never taped one of our paddles before. I picked a good one to start with. We weren't ten minutes on the water when a pair of Roseate Spoonbills passed overhead. Beautiful pink birds that look like they were from an animated cartoon. I only caught them on tape as they passed away from me. I thought next time I'll just keep the camera in my lap to be ready. 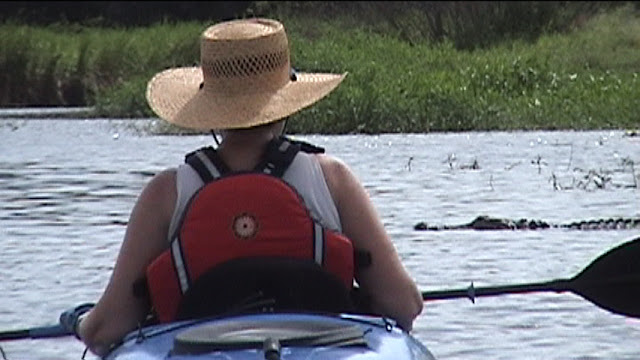 Ilse coasted up to a large gator, probably in the twelve foot range, laying placidly to the right of her kayak. As she slowly and quietly coasted toward the fearsome looking creature, it slowly began to swim to the other side of the weed-free part of the lake passage. My wife sat calmly with her paddle out of the water as the obvious owner of the lake rather pompously swam across her bow.  Kayaking in Florida is quite different than the mountain lakes of Georgia.  [The video is on YouTube at Myakka River State Park]

After watching at least a dozen or so of the big boys, and paddling for over an hour, it was time to head back. The cloud cover was gone and the sun was climbing higher in the sky.

Every once in a while something unique catches us off guard. We were swarmed with Love Bugs as we loaded the kayaks back on top the Jimmy. I mean really swarmed! They were everywhere! Thankfully they weren't mosquitoes, but they were almost as big a nuisance! They were all over the kayaks as we tried to lift the boats on top of the SUV. We finally got loaded and in the car, which by then was also filled with the little black, orange-headed, fornicators. We drove around the parking lot just to get them off the car, and finally opened the windows to blow out their romantic family members that seemed oblivious to the world.

We ended up sitting outside the camper reading our books in the cool shade of the beautiful Live Oak trees. After another great dinner and a walk with the dogs, we turned in for the night.

Sunday morning broke cool and beautiful, a perfect day for a bike ride. We casually pedaled the mile or so to the forest canopy walkway, a 100 foot long suspended walkway some 25 feet above the ground. The walkway in itself is interesting, only four people at a time are allowed on the suspended part of the walkway that allows close observation of the Tillandsia and other air plants that live in the canopy of the Live Oaks. At the terminus end of the walkway is an observation tower that stands 74 feet in the air. The tower offers an unobstructed view of the park and the surrounding area.

We were back at the camper by 11:00am and packed and ready to roll by 12:00pm. We only had one other camper at the dump station and we were home again by 1:30pm. A great weekend at a great Florida park.

Next: Anastasia State Park, Florida - One of our favorites - at:
http://sleepstwo.blogspot.com/2011/05/anastasia-state-park.html