We once again dropped in at the Stephen Foster Folk Cultural Center State Park in White Springs, Florida, this time on our way home. We stopped there for the first time three weeks before on our way north to the Georgia mountains.

Our original plan was to stop on the way back at the other Stephen Foster park, the one in Georgia, but since we hadn’t made reservations at either one, we decided to do the “drive-in” at the Florida campground.

We had the kayaks strapped on top of our SUV, but it was just too hot, and we were just too close to the end of our very first ever, three week long vacation to take what would have been a short paddle at the Okefenokee park.

This time, however, we decided to forego kayaking at the Georgia park and headed instead just a little further south, and just a little off US 441, on the west side, to stay at the Stephen Foster Cultural Center State Park, not far over the Florida state line. Like the Georgia park, it too, is located on the Suwannee River.

We usually travel US 441 rather than I-75 through Georgia as the roads are mostly great and the traffic is a lot less hectic. We usually make better time to Athens, Georgia, via US 441 from north Florida than Interstate 75. The highway also takes us near one of our favorite campgrounds, the Stephen C. Foster State Park, near Fargo, Georgia. The park is right in the middle of the Okefenokee Swamp.

Time to head home. Besides, the Florida park is just a few miles from the unavoidable Interstate 75 to head to Southwest Florida. The Florida park has easy access, nice clean facilities, and wide, easy campsites that make it a real pleasure to visit.

After a quick, pleasant registration, we headed for our spot, the same one we had used three weeks earlier. Only scattered RVers around the park, we had the campground mostly to ourselves. As we fixed dinner, it began pouring rain, and again we were happy we had passed on kayaking. Something to do another day.

We went through our pile of brochures and pamphlets and reflected on what was really a great three week venture. The little Jimmy SUV had done well, and we were happy with our Cikira 13FD. Costs were not exorbitant and we actually spent less on campgrounds than we had budgeted.

We had made several decisions that we will follow-up on before we head cross-country to San Diego next year for an Air Force reunion, including tow vehicle and even a slightly bigger trailer, and that will be a study in itself. 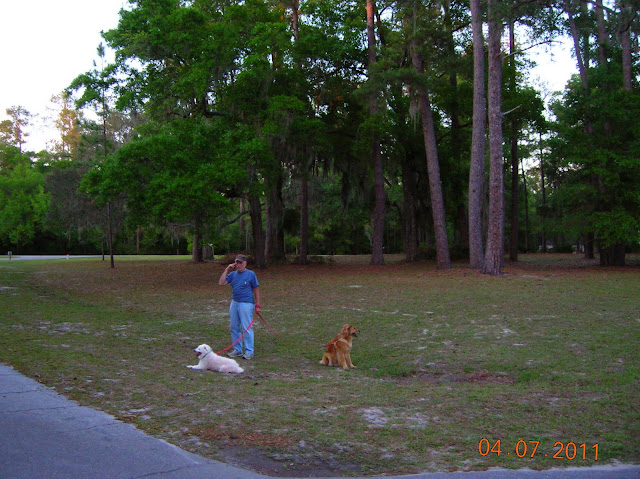 The trip home the next morning was uneventful, but again we jumped off of the Interstate near Bushnell, Florida, just to take US 301 through Dade City and Zephyrhills on a “recon” run. We were back on the Interstate though, soon after passing the Hillsborough River State Park. We were home in just over an hour.

Sneaking a quick look at the Internet soon after opening up the house, I came across an email I had to open. It was from a friend about the Stephen C. Foster State Park in Georgia we had decided not to paddle the day before. The Clinch County News had posted a special video about an alligator feeding frenzy in the access canal just beyond the boat ramp at the park. It's currently on YouTube at  https://www.youtube.com/watch?v=2CQ1N1mAi9s.

Yes, we’ll go back to the Georgia park to go kayaking. We just won’t put in first thing in the morning.

Next: Close to home - The Myakka River State Park in Florida:
http://sleepstwo.blogspot.com/2010/09/myakka-river-state-park.html