My wife and I had answered an ad we found on Craig's list, and soon found ourselves in the lobby of our local Bank of America, waiting to draw a cashier's check for our new camping trailer. It wasn't new, but it only had one owner who had obviously not used the camper. It was a deal we couldn't pass up. The transaction took only minutes, and after a quick trip to the motor vehicle registration, the keys were ours.

We had dabbled with the thought of a small camper for several years, looking at A-liners, a small, fold up camper, and other small towables that offered us the ability to enter the world of recreational vehicles without a substantial financial investment. We had been tent campers for many years, but sleeping on the ground was something we wanted only as a memory. We were looking for something with its own bathroom. Few of the small towables or soft-sided pop-ups offered a toilet other than a port-a-potty that barely met the needs of a single, overnight stay.

We had found a camping trailer that weighed only 1745 pounds actual axle weight, with a gross vehicle weight of 3100 pounds. With only a 215 pound hitch weight, it was a perfect fit for the 1999 GMC Jimmy that could tow it easily. It was a Cikira 13FD, with an actual length of 14 feet, 9 inches. It was equipped with a 13,500 BTU air conditioner, a 7 cubic foot refrigerator, a microwave, and a two-burner gas stove. The dinette folded down to a full queen-size bed, and it had a full separate toilet and shower! We were impressed with the quality, and the cleanliness of the unit, and decided to take the plunge.


Before we could pick up our new trailer, I had to add a trailer brake controller and a seven-pin RV plug to the existing wiring harness. I already had a flat, four-pin trailer connector used for boat trailers that does not have a hot 12 volts needed to charge the battery in the camper. That wire has to be added from the battery of the tow vehicle to the new seven-pin RV plug, and it has to be fused. After checking several sources, I dropped by a shop that specializes in trailers and got an estimate on both the controller and the wiring. When I picked up my Jimmy the next day, I found the actual bill came out 80 dollars higher than the estimate. All I could think of was “welcome to the wonderful world of RVing! This is going to be just like owning a boat!!”

After getting the camper home and looking it over with a fine toothed comb, we decided all it really needed were more storage hooks! And a place to try it out. We decided on a campground that was close by, but far enough away to seem like we were really camping and picked a U.S. Army Corp of Engineers park at Ortona Locks, on the Caloosahatchee River, about halfway between Lake Okeechobee and Ft. Myers. We easily and quickly made our reservations on line and we were ready to go.

On August 9th, 2009, at 11:45 am, we pulled out of our yard on our first camping trip! It was only 56 miles to the Campground, but it was far enough to be a real adventure. Towing anything on I-75 is always an adventure! After checking in the really nice campground, we noticed there were only four other campers. Our first observation was there was no real shade from the blistering Florida sun. It was 97 degrees by the time we carefully set up, and we immediately closed up and turned on the air conditioner.

The campground is on the south side of the lock, and is typically clean and spacious, as we have found all Corps of engineer parks to be. There simply isn't a lot at the campground other than the lock itself, but it is quiet and safe, with controlled access as with all Corps parks. We settled back and made our first dinner, a spaghetti dinner, complete with rolls and a salad. Aah! So far, so good. 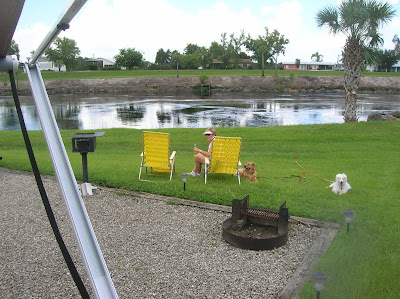 Our evening walk with our two dogs was cut short as the stifling heat was just too much for our oldest dog to endure. Back to the camper and into the air conditioning. We had picked up a small, 13 inch flat-screen TV that fit perfectly on the counter space, and we ended up watching a few of the regular shows before a thunder storm rolled through and we packed it in for the night.

We woke up the next morning a little after 7 am, and were amazed at the quiet campground. The dogs seemed to understand as well, and did not make a sound as we went about our first breakfast. We were soon outside with our sling chairs, armed with books we meant to read, but, somehow, even the best laid plans seem to go wrong at the strangest times, and for the strangest reasons.

Ilse wasn't feeling well all morning, and by 11:00 had called our doctor to see if she could get to see him as soon as possible. We broke camp and were on our way out of the campground by 12:05 pm. The attendant at the gate took some quick information from us and wished us the best. We were back home by two, and Ilse suffering from intense pain in her side, went to the doctor immediately where they diagnosed her as having passed a kidney stone! She was home again by 5 pm, with pain killers, but the crisis had passed, and she began resting and wondering why it had to happen on our first camping trip. We had used the new GPS to locate hospitals and doctors just in case they were needed, and do that now before every trip.

We decided to wait a month before trying out the camper again, and in the meantime, we got a credit on our charge card from the Corps of Engineers for a “medical credit.” They had refunded the part of our prepaid reservation that we hadn't used!

We washed it again after getting it home, even though it wasn't really dirty, and prepped the little unit for its next trip. Excitedly, we began making plans for our next trip, and were thrilled when friends invited us to meet them at Highland Hammocks State Park near Sebring only two months later. We began making plans for our second trip, and could hardly wait to roll out again.