As we approached the intersection of State Road 484 in Dunnellon, Florida, headed north on US 41, I spotted the discrete, low mounted camper icon arrow pointing to the right out of the corner of my eye. The main road sign for Rainbow Springs State Park points straight ahead, but the almost unnoticeable white image of a camper on a brown background mounted below the main sign post has an arrow pointing to the right instead.

We thought, “How cool! They actually had the foresight to warn campers the campgrounds for the State Park are on the other side of the Rainbow River from the main park.” In fact, the two parts of the park are about seven miles apart by the shortest route.

However, after turning on to state road 484 and driving for fifteen minutes without seeing any further signs, we began to question if we had indeed misread the first sign. We diligently checked every intersection, looking for the next sign pointing to the campground. It was raining, and we were extremely cautious not to miss the turn-off sign.

When we crossed State Road 200, some 9 or 10 miles from U.S. 41 without seeing any signs for the State Park, we were not happy. We pulled off at a wide spot of the road and checked the GPS, which takes you to the main park at the head-springs on the wrong side of the river, not the campground.

The GPS map showed a possible access road, 180th Ave, which proved to be the right road to the campground. A U-turn towing a travel trailer is always a pain in the butt, especially on a two lane road, and State Road 484 is no different!

The Rainbow Springs State Park campground is not marked from either direction from SR 484!1 There is no indication of the state park campground entrance anywhere on the State Road. Too make matters worse, when I finally pulled into the State Park entrance on 180th Avenue in a driving rain storm, I was informed the entrance I had entered is for tubers only. The campground entrance is another two miles up the road. I might as well had gone tubing, by the time I had sloshed over to the office and back, I was wet enough.


After another U-turn to get out of the tubing entrance, I pulled back onto 180th Ave and continued on for another two miles or so. When I pulled into Rainbow Springs State Park Campground, I wondered where the guard house, or welcome shack, was located.

There is a swing arm gate that closes at sundown across the two-lane road, but no ranger station. The first thing we encountered is a strangely laid out tarmac with a dump station on the far left side. It was still raining heavily when we arrived so the only thing we could see was what appeared to be a huge parking lot and a gift store. That's it! After walking to the gift shop, which indeed is where we registered and got our windshield pass, I squished back to the truck and looked up our reserved site, trying not to get the map wet. It was almost a quarter to 4:00 pm by the time we registered. We had wasted almost an hour because of the missing sign on SR 484.

We found our site, number 25, just as the rain began to let up. Ilse didn't get too wet as she backed me into the slot, which was completely under water. She held our little Motorola Walkabout radio in one hand and her collapsible umbrella in the other as she tip-toed through the huge puddle, giving me directions and making sure I didn't knock down the electrical box on the side of the campsite. 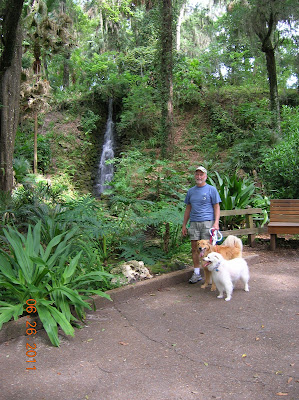 We sat in the car for a few minutes as the little flood subsided from the almost perfectly level campsite. She laughed as she told me about the site which was listed as partial shade. There is one scrawny, pine tree and that's all. Recently graveled, it was soon ready to walk on without getting our shoes sopping wet. We were completely un-hooked and set up in about 30 minutes.

A full service campground, the fairly new campground has water, 30 and 50 amp electrical service as well as a sewer hook-up. The sites are rather sparse as far as vegetation is concerned, with only a few sites offering any shade. Privacy isn't bad, depending on the site location, but there are several completely in the open. I would avoid the first few sites on either loop at all costs as they sit in the middle of the pull-in loops, and have no privacy what-so-ever.


The restroom/shower facilities are new and absolutely spotless. Not the same can be said for the area around the office/gift-shop, which is in dire need of tender loving care. The closed swimming pool at the rear of the office has weeds growing around the perimeter, as in fact, does most of the campground.3 Dog Fennel, a tall but unattractive native Florida weed that is always the first plant to grow back after a fire, is everywhere. A good mowing is in order, but that is an issue that probably has been whacked by the recent budget cuts.

After breaking out the shrimp and the cocktail sauce, which served as a great appetizer, we had our traditional first dinner, spaghetti. Then we took a stroll to one of the prettiest, clear rivers in Florida, the Rainbow River, just a few hundred yards beyond the office/gift-shop. The evening air was cool, clear and mosquito free. A pleasant, Florida stroll.

There is a small swimming area here, and an aluminum ramp used to launch both paddlers and tubers who flow downstream two miles to the takeout point at the first park entrance. The park runs a tram for tubers between the two locations downstream from the head-spring. The main area at the head-spring seven miles away has a much bigger swimming area and many more canoes and kayaks for rent.

You are given two windshield passes when you check in. The one is for your windshield at the campground and the other is for the main park entrance at the head-spring which normally costs two dollars.

The park at the main head-spring is one of the prettiest parks in the Florida park system.  A former Florida tourist attraction that went bankrupt in the middle seventies, a victim to both I-75 and the then newly-opened Disney World in Orlando, most of the attraction's beauty has luckily been saved. Closed for several years due to litigation and legal wrangling, the State of Florida eventually opened the head-spring area to all visitors.

Getting to the main park from the campground on the other side of the river requires a car, or bravery, if you are a cyclist. The short route, north to County Road 40 is around seven miles long. Riders must share the road with motorist doing 55 mph on both county roads as well as U.S. 41 as there is no bike trail or bike lane. The southern route is almost four miles longer, and just as dangerous. The main park, however, is a park not to be missed.

The walk from the parking lot to the entrance is a taste of the beauty of the park. Once inside the park you have two choices: To the right leads downhill to the swimming and paddling area, the other side to the once commercially-maintained gardens and forest. The head-spring area for swimmers and paddlers who flock to the 72 degree spring, especially on weekends, is very popular. I highly recommend visiting during the week, if at all possible. The forest trail has a low, wide paved path to the waterfalls, and a higher return path back to the gift shop. The gift shop, incidentally, doesn't open until 11:30am, and closes again at 4:30pm, so don't count on buying batteries if you get there too early.


Man-made waterfalls and cascades have been preserved as well as the foliage that dominates the area. The walking path leads to the Butterfly garden, and if you are lucky, you'll get to meet Charley, the volunteer who almost single-handedly maintains the beautiful area, and get to chat with someone who really knows his plants. The other side of the butterfly garden leads to several walking trails, one of them three miles long.

The swimming side of the spring has a dock for swimmers, and a few hundred feet further downstream, a rental facility that has 20 Grumman aluminum canoes and 12 two-man Pamlico kayaks which can be rented for $10.00 an hour, with a two hour minimum. There can be a waiting list for rentals on weekends.  Years ago, glass bottomed boats took tourists for short, twenty minute excursions down the river, pointing out individual springs and hiding places for the Large Mouth Black Bass that helped make the river famous.

On Tuesday morning, we parked our Jimmy in the lot in front of  the gift shop at the campground location and walked the short distance to the river put-in ramp.  Luckily, we met the driver of the tram from the tube rental part of the park, the entrance gate we had erroneously pulled into during the rainstorm. On weekends, the concession has a full-time person on site all day, but during the week, you have to catch the driver of the tram as he has the keys to the boat rack and the required paperwork. The tram appears every half hour or so. After signing a waiver, leaving your driver's license with the tram driver, and paying your $20.00, you get to push off into one of Florida's prettiest, clearest rivers.

The water flow is consistent, but not overwhelming, as you paddle toward the head spring. The paddle is an easy 40 to 45 minute trip, with houses on one side of the river and wild forest on the other. About half way up the river, we met an otter which theatrically climbed up on a log for us so I could take a quick photograph. A Cormorant sitting further up the tree log watched apprehensively. Several children in a canoe started yelling about the otter and it immediately slipped quietly back into the river. We never saw it again.

The river is absolutely clear and every bass, bream, anhinga, turtle, or even cormorant, that swims anywhere near your boat is clearly visible. The absolutely crystal clear water is 72 degrees, and after a few minutes the water is actually comfortable enough to drag your hand or foot as you take a break from the leisurely paddle. We met many kayakers headed toward us from the head-spring area, with a few typically unconscious paddlers who probably drive their cars with the same total disregard for others as when they paddle.  Don't expect other paddlers to know what they are doing.  I HIGHLY recommend paddling on the river during the week rather than on weekends. We were told by the tram driver the past weekend traffic jam had backed up the county road leading to the park with tubers and paddlers. I can see why, this one of the nicest paddles we've done in along time.

This park rates as a “will come back,” one of the prettier parks in Florida.

More information about the Rainbow Springs State Park can be found at the official web site at:
https://www.floridastateparks.org/park/Rainbow-Springs

1 According to park rangers, the original campground markers at SR 484 were removed during road improvements by Marion County. At the completion of the road work, Marion county tried to charge the Florida State Park system $1200 to remount the signs, the Florida park system rejected the bill and the signs have never been remounted!