When I turned off the paved main park road onto the entrance to the Dogwood camping loop, my first reaction was, “Whoops, I must have missed the turn somewhere!” Nope, both of the camping loop roads, both Dogwood and Magnolia, are not only narrow one-way, single lane dirt roads, but it has been a long, long time since they have seen a grader. Ragged is the first word that comes to mind. The ruts in the first few hundred yards did not make the rest of the loop seem inviting. Nevertheless, we pulled into the heavily-forested campground and checked our reserved site, number 32, with some dismay. It is the very first site of the loop, and at the very bottom of a gently sloped hill. Not wanting a repeat of sloshing through puddles as we had done at Rainbow Springs, we called the park office and they cordially gave us a list of available, alternate campsites that would be available for our planned four-day stay. The Internet map, by the way, is only a vague resemblance to the actual campground. Well, the map's loop is round, sort of.

We checked the next two sites and picked site 34, a shady site at the top of the small hill. A quick cell phone call to the office and we were all set. Our next revelation was there is no vehicle access to the shower/restroom facilities to the Dogwood loop. The only road is an access road for service vehicles only, adjacent to the camp host's site. The toilets are land-locked, so to speak, with only barren, narrow, and very rocky foot paths that lead from the back of each site to a main path that precariously meanders to the bathhouse. Stumbling along the rocky, and sometimes mossy, path to get to the toilet is the hard part: the facilities are fairly new and spotlessly clean.  There is a covered trash can station at facility as the main dumpster, as is the dump station, is a mile and a half away at the Magnolia campground. The shower and toilet facilities at the Magnolia loop are not only drive up accessible, there is room for several vehicles at once.

Almost all of the sites we looked at are full shade, with water and 30 and 50 amp electrical service, on packed sand, and all appeared fairly level. It only took us 30 minutes or so to be completely set up. Larger campers or longer trailers might have a problem backing in to some of the sites as there is little room to maneuver as you back into the 90 degree sites from the single-lane, dirt road.

We didn't do our traditional spaghetti dinner. Instead, we broke out the shrimp and the cocktail sauce along with a couple of glasses of wine, and relaxed after an almost 5 hour drive up from Port Charlotte. We broke our usual travel rule and traveled up I-75 almost the entire trip. My nerves were frazzled, as they always are when I have to share the road with a two-ton missiles operating at speeds above 90 feet a second by operators who can't see my big, white, 20 foot trailer! I'm firmly convinced many of them can't see each other, as well. I'll take my back roads any day!

The campground was almost 4 degrees cooler than the road coming in. With a nice breeze, it was really a beautiful July day in Florida, just barely over 90 degrees. We took a drive over to the other campground, the Magnolia loop, and watched a doe and her fawn alongside the nice shady main park road, and then took Taz and Daisy on a mile and a half walk around the Sante Fe River sink. The river actually goes under ground here, and pops up again some three and a half miles south at the Sante Fe River Rise.

The trails are well maintained and marked, and they have trails for every type of hiker.  Bicycles are allowed on only some trails, you need to check the park brochures for details, but pets are allowed on all trails. By the time we finished the “Yellow” trail, Daisy and Taz were exhausted from the heat and humidity, even though we were protected in the shaded forest. Again, take precautions against ticks and chiggers by spraying your shoes and legs with insect repellent, (spray everything!)  especially in the summer season.  We had a problem with chiggers here that we hadn't had anywhere else, but, in all fairness, we spent quite a lot of time walking the beautiful trails with our two dogs and we failed to spray ourselves before we walked.  Checking for ticks after walking the forest paths and trails is mandatory.

[For more information on Chiggers, see my link at :
http://sleepstwo.blogspot.com/2013/08/the-dark-side.html] 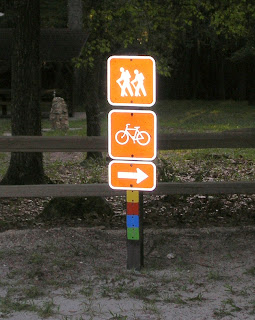 The park is one of the oldest in Florida, and is actually built on the old Florida town of O'Leno, which we were told is pronounced “O'Leeno” Why, you ask? Because the original name of the town was Keno, named after the card game. Church and Civic pressures were applied in the middle 1860's and the name was changed. But, apparently, not the pronunciation.

It is a beautiful, unique park, with a thick forest covering the entire park. The proximity of I-75, however, might be a draw back during the months when you don't have your A/C on if you stay at the Magnolia loop campground. Highway traffic noise can be clearly heard from the Magnolia campground, but not from the Dogwood Campsite, which is further away from the Interstate.

This is a nice campground, and even a better park. It is a great place to use as a base to check out central north Florida. There are more springs near here than I can list, including at least three local “Blue Springs.” The sandy sites might be a drawback to some, but the sites are hard packed and no problem.


The Sante Fe river was very, very low due to the lack of rain, and not at its prettiest.  The swimming area was temporarily closed due to lack of water.  The river is fed off of the upper Suwanee River, and when that river is low, so is the Sante Fe. Still, the old suspension foot bridge, built in 1934 by the CCC, the Civilian Conservation Corps, is unique, as is the history of a town that time has long since vanished and been forgotten.

On Sunday, we drove out of the park and headed south along U.S. 441, looking for the Santa Fe River rise, and eventually found a county canoe ramp near the spot the river crosses under the highway. We took photos of the pretty stretch of river and watched the many wading birds that were taking advantage of the low water level. A woman soon walked up with an older Black Labrador on a leash, and we began chatting about the area. As we talked, the Lab, named Sheba, pulled toward the shallow river, so her owner, Ann, unleashed her. Sheba slowly waded out into the river and laid down.

Ann and her husband are transplants from Sugarloaf Key, and have lived in the area for over ten years. We had a pleasant time talking about the pros and cons of living this far north versus living in Miami and the Florida keys. while we chatted, Sheba stood up and waded further out into the river between several large rocks that protruded out of the gently flowing river, and laid back down in the water. Sheba was facing downstream with the water running past her hips.  She was as happy as any Black Lab can be.  Soon, an aluminum canoe came slowly paddling downstream with three young people leisurely enjoying the quiet river. The young woman in front paddled, as well as the young man in the rear, but the woman in the middle was just looking around, enjoying the ride.  As they passed by the remnants of the old highway buttress right in front of us, they ran aground with a loud crunch.

The girl in front saw Sheba and called back to us laughingly, “Have the dog give us a push!”

The girl in the middle had been looking over the other side of the canoe and did not see Sheba, who stood up just as the girl turned her head to look at us.  I have no idea what the girl thought, but by the look on her face it must have been a real shock to see a huge, black animal rise up out of the  river and look at her at eye level from only a few feet away! Sheba just watched as the trio finally got out of the canoe and pushed through.

We said goodbye to Ann and Sheba, and drove down to High Springs just a mile away to continue exploring this part of Florida.

The O'Leno campground is quiet, offering very good privacy and space between most campsites. Both campgrounds are completely covered with a beautiful hardwood forest. The Magnolia campground is adjacent to the river sink, along with the swimming facilities, which were closed while we were there due to lack of water, and adjacent to the permanent facilities of the park. There is no gift shop at the park. Limited items such as caps or shirts are available at the ranger station when you drive in.


Next: A new tow vehicle and my grandmother's wrenches, at:
http://sleepstwo.blogspot.com/2011/08/grandma-would-be-proud.html


More information about the park can be found at:
https://www.floridastateparks.org/park/Oleno