Trailer Hitch: Grandma Would Be Proud!

After several months of car shopping and driving all sorts of SUVs that could comfortably haul our new KZ Sportsmen 202, we finally traded our trusty, venerable 1999 GMC Jimmy for a newer, 2005 Toyota Sequoia.  We simply wanted more towing power to haul our new 21 foot travel trailer than our six cylinder Jimmy offered. We wanted a comfortable vehicle we could use whenever the travel trailer was sitting dormant, waiting to be once in again connected and hauled somewhere exotic. 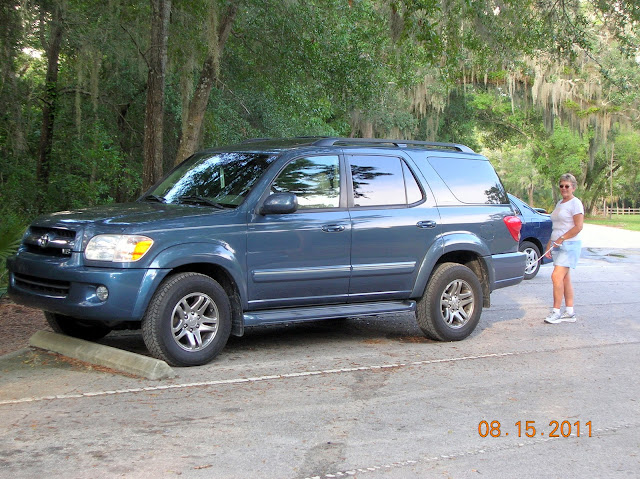 We test drove GMC Yukons, Toyota V-8 4-runners, Chevy something or others, Fords I couldn't see over the hoods of, and just about every combination of pick-up truck or SUV that could haul the new trailer and still give us a vehicle we could use “off-duty.” We finally decided on Toyota's big V-8 SUV and drove several Sequoias before finding the dark blue unit we really liked. It only had ninety-five thousand miles on it, and other than a couple of cosmetic issues, was in great mechanical shape. I was surprised to find there were very few used Sequoias with less than 100,000 miles on them.

My dad never kept a car beyond the 60,000 miles. When it hit 60,000 miles, it got traded in before the fenders fell off or the floor board rusted out, but that was then, and this is now since Detroit has finally been slapped up against the side of their corporate heads by foreign competitors. Our SUV looked like new, except for the floor mats, which we replaced.

I added a new brake controller and was pleasantly surprised to find the necessary wiring was already in place, all I had to do was take off the existing plastic caps from the wiring coiled up under the dashboard and plug in the new controller. Nothing like planning ahead.

I had the Sequoia safety checked and all the inspections brought up to date, from spark plugs to brakes. When we test drove the SUV with the trailer attached, we knew we had a great combination. Only one thing needed to be resolved: The ride height difference between the two vehicles. The trailer hitch had to be lowered to keep the travel trailer level.

The two-inch box hitch receiver is fixed on each vehicle, but the shank on the trailer ball assembly for the load equalizer was adjustable.  All I had to do was move the shank down and we once again had a level travel trailer. But I had a problem: I didn't have any regular wrenches that even came close to big enough to fit the nut on the hitch. 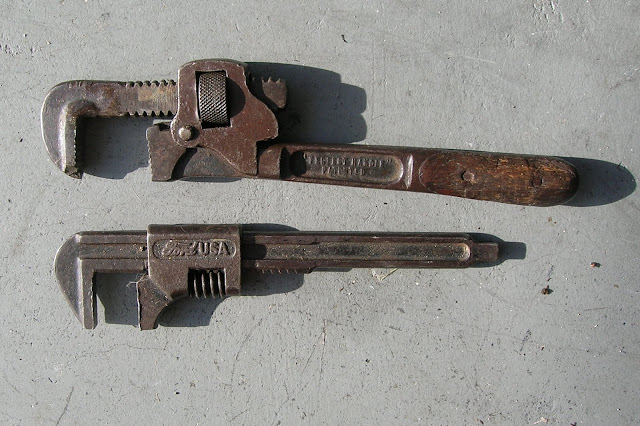 Laura Corns Mindling, my grandmother, worked during the war for Ford Motor Company at the Willow Run Aircraft Plant, just outside Detroit, Michigan.  She was a press operator, and a good one.  After the war, Ford kept her on at the River Rouge plant, near Dearborn, where she worked until 1956.  She slipped on an oily floor that year and broke her wrist in the fall.  When she was finished with her medical leave, she took full retirement, and eventually moved to Miami, living with her husband Lou, first with us for several years, then moving not far away in their own efficiency apartment.

Laura lived alone for several years in Miami after Louis, my grandfather, died, then moved to live the rest of her life with my Aunt Ruth in Denver.  After Laura's death, my brother and I received several artifacts and family mementos. I received a few items, including a heavy, wrapped bag.

Included were two wrenches used by my Grandmother at Ford, oh so many years ago.  I like to think she used these tools to help win a war, or build a car that perhaps someone she knew may have driven.  At any rate, today, those wrenches helped me change out a ball hitch and a trailer shank that had me absolutely stumped.  Grandma would have been proud.

Next: On to Wekiwa Springs State Park, right in Mickey's backyard, at:
http://sleepstwo.blogspot.com/2011/08/wekiwa-springs-state-park.html