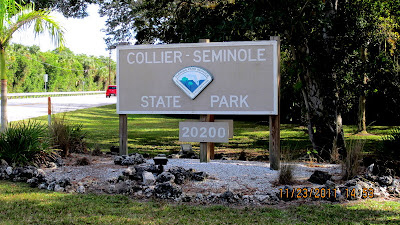 “A nice short trip, but let's go south instead of north this time,” I suggested.

I picked Collier Seminole State Park, just a few miles from Marco Island, Florida. It would be a nice, two-hour tow, about 90 miles or so, almost due south from Port Charlotte.

I have driven past the park many times with my parents as we headed to Tampa from Miami, long before I-75 was built, but we stopped only once.  We didn't go into the park as my dad didn't want to pay the entrance fee just to look around.  The park is located right on U.S. Highway 41, and even closer, we found on this trip, to Collier County Road 92, which runs adjacent to many of the campsites in the back side of the main loop.  The back of the palm hammock campsites are just a few feet from the fence that butts against the county road. I felt sorry for one fifth-wheel camper who pulled in well after dark and slowly crept through the darkened campground searching for his site.  I hope he had great portable lighting to see behind him as he tried to park his huge, cumbersome rig.  The sites are level, clean, and mostly grass, but some are a bit of work to back into. 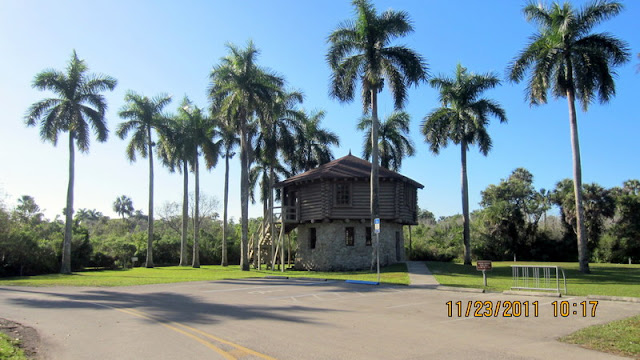 Originally a county park and turned over to the State of Florida in the late 1940s, it has had several rebuilds as is evident by the outstanding area around the boat ramp and the really nice children's play area, but, unfortunately, the toilet and shower facilities are over due for rehab.  The facilities were clean as possible, especially considering the Thanksgiving holiday crush, but they are old and in need of replacement to match the rest of the park.

The original campsites were laid out years ago when tent camping and smaller travel trailers were standard.  The planners who laid the sites out had no idea about the length of today's behemoth fifth-wheel trailers or the monstrous Class “A”s that can barely negotiate the access roads, much less back into the heavily wooded campsites.  The woods between the campsites are palms and palmettos, not the hardwoods of the adjacent hammock,  so there isn't any privacy between sites.

We pulled into the park main gate without any trouble, and everything went smoothly.  I had picked a site back in August and was the only camper, other than the campground hosts, planning on spending the four day Thanksgiving weekend.  I picked a site that, on the Internet, looked like we might have some privacy, be close to the facilities, and be easy to back into.  It was on a corner site with our door facing away from the rest of the campground. Many of the sites have length restrictions, but this one looked perfect for our 21 foot trailer.

As we pulled in to the campground, we were struck by the beauty of the stately Royal Palms that define the atmosphere of the old well, manicured park.  We slowly made our way around the one-lane access road and realized the Internet map on ReserveAmerica.com is quite inaccurate!   Our planned site, 69, was in the middle of the interior loop and not on a corner, and besides being far shorter than expected, the picnic table and fire pit were on the same side of the site as the water and electric hook-up.  Since the door is on the other side of the trailer, this makes for an awkward campsite.  Not wanting to walk around the camper every time we went outside, I called the park office to see if we could switch sites.

The pleasant ranger quickly searched the available sites and told us there were only two left in the entire park!  We picked the one we liked best and within an hour we were settled in and ready for our glass of wine, er, grape juice.  Our first night was really pleasant as few of the sites were filled, but by Thanksgiving morning, the campground was packed. Still, it was not unpleasant even with all campsites filled. Everyone we met was friendly and cordial, except for one small group of Civil War Re-enactors in loop 1, the tenting area, who glared at us as we stared at the big Confederate Battle Flag they had strung between two trees. 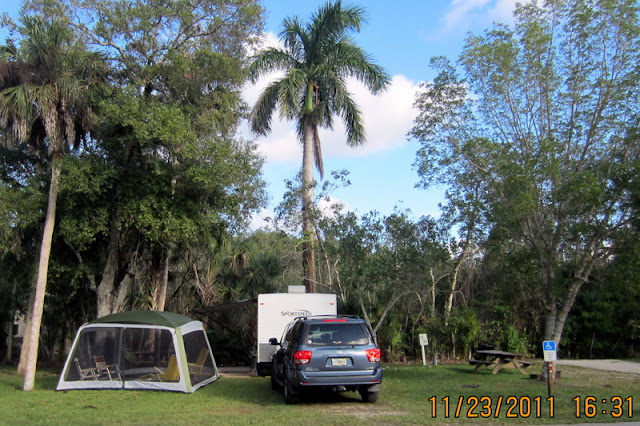 There are two camping loops. The first loop, sites 1 through 19, is better suited for tent campers and small pop-up type trailers. It is the prettier of the two loops as it is in the hardwood hammock and foliage separates most sites. That's where we found the flag. I doubt many trailers longer than 12 or 13 feet, or even a medium sized Class “C” could use any of the sites. The other loop is the main, triangular shaped RV loop, but even it is sometimes perilous for big rigs.

The Royal Palm Hammock walking trail, a 45 minute loop through the Gumbo Limbo trees and Royal Palms, is well maintained and has a section that is a brand new, raised boardwalk. The facilities at the boat ramp area are also nice, but does not have shower facilities.  The walking trail is accessed at the boat ramp area.  The famous 1920's walking dredge used to dig part of the Tamiami Trail is on display at the entrance to the State Park. It is a pretty park with close access to the western Everglades, even Shark Valley and Loop Road.

The State Park is seven miles from Marco Island and the nearest grocery stores and gas stations.  This is an up-scale winter residence area so be prepared to pay more for gas and groceries than a little farther up the road in Naples.  In the other direction down U.S. 41, the Everglades National Park West entrance is 13 or so miles away at Everglades City.  The Fakahatchee boardwalk, about eight miles away, the East River Canoe and Kayak trail, and even the Turner River are only short drive from the campground.

The town of Copeland is just north of U.S. 41 on Florida 29, about 16 or 17 miles away. Copeland is where you go if you want to see where a modern day Florida cracker might live. Some of the residents are descendents of settlers who lived here years ago when the railroad ran down to Everglades City. Don't expect the rural glamor espoused by the legend of the Crackers 'cause it ain't here. What is here, however, if you are into Florida history, is Ted Smallwood's store on nearby Chokoloskee Island. If you are a fan of Peter Matthiessen's "Killing Mr. Watson," you will be right at home.

There is a unique part of the Florida Park System here though, called Jane's Scenic Drive.  A dirt road heads north out of the remnants of Copeland to the trail-head of two separate hiking trails some four or five miles apart.  Both trails take you up the limestone depression known as the Fakahatchee Strand all the way to Alligator Alley.  Quite a hike for most casual visitors to the Glades.


The drive itself travels through prairie and hammocks that are unique to the Everglades.  If you explore the beginning of the well-graded road, you will find two rock structures a Florida Ranger said were the work "of the locals". He didn't know the origin of the rock piles, so I suggest they are from some pre-Calusa society that may have rivaled the Celts when they built Stonehenge. Or, they could be a pile of rocks some past developer used to highlight a dream of a future city. Whatever.

If you are looking for privacy and state-of-the-art shower facilities, Collier Seminole isn't for you.  The park gets crowded quickly when all the sites are full, and the awkward dump station causes more than its share of traffic issues, again, mainly to the old layout and design.   But if you have a smaller unit, love the Everglades and can handle the mosquitoes, then this is a great park. The salt marsh mosquitoes, by the way, are part of the experience at any campground anywhere remotely near the Everglades, and Collier Seminole is no exception. Bring insect repellant or protective clothing for an enjoyable camping experience.  Lots of it.

Next: Northbound in the winter- the only RVs on the road, at:
http://sleepstwo.blogspot.com/2012/01/thermal-underwear-and-bathing-suit.html