Talk about a complex! No matter who we told we were going to Watkins Glen State Park, the answer was always the same: “You'll love the park, just make sure you are on the Mohawk Loop, it's the only one with electricity.”  We felt like the only people on earth who hadn't camped there. 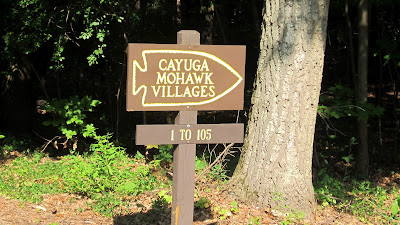 The Watkins Glen State Park was the northernmost campground, and the only non-Corps of Engineers campground we made reservations during our entire three-month, east-coast trip.

The first weekend opening at the popular campground was right after Labor Day, the three-day holiday that traditionally signals the end of summer. Timing was perfect as we were to visit our friends on nearby Seneca Lake before we headed south toward home. It was also the weekend of the Watkins Glen Grand Prix Celebration where the reenactment of America's first Grand Prix automobile road race takes place through town and on local roads. I was surprised to find any campground openings then as that is a very popular event. 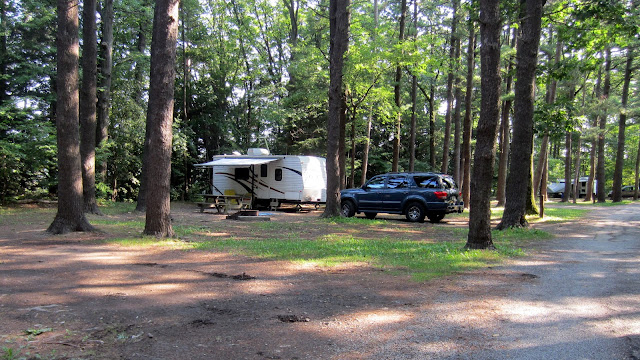 We checked in on Tuesday just before lunch. We had to wait around before the rangers opened the office as it is only open for certain hours of the day. If you know where you are going and where the water spigots are, just trundle over to your reserved spot and pick up your paperwork later.

Watkins Glen State Park does not have individual water to any of the 283 sites, and electricity is available only on the Mohawk loop making that one loop extremely popular with RVer's. All six camping loops are named after Indian nations of the region, and since we didn't have a campground map, we had no idea where to go. We decided to walk the dogs, have lunch in the trailer, and wait for a park attendant.

The friendly ranger at the park entrance told us they had just broken all attendance records over the holiday. The trash trucks were just hauling away the overflowing dumpsters to attest to the volume of campers. After checking in and settling into our campsite, we found we had the heavily wooded campground to ourselves. This was the first campground where we had to show our dog's medical proof of rabies vaccination rather than just current dog tags. 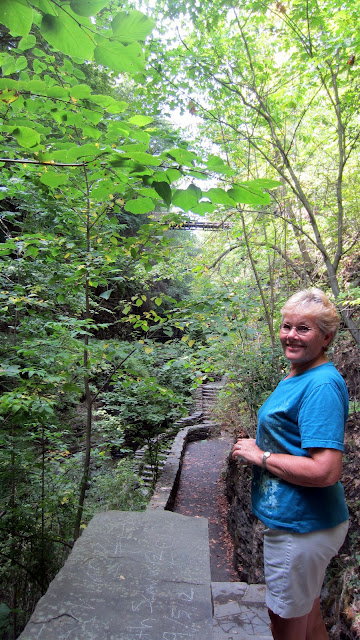 The unique park is located right beside the Village of Watkins Glen. My GPS actually saved me from missing the final turn off north-bound, New York Highway 14 onto NY highway 329 that leads to the near-by entrance to the state park. There are three entrances to the state park, but only one to the camping area which I almost missed. I was busy looking toward the lower visitor's center Main entrance just beyond the bridge over Glen's Creek, well past the turn-off. The lower entrance is only for the parking lot for foot access to the waterfall and the gift-shop.

I wondered where the old race track used to be as we drove up the hill on highway 329 looking for the turnoff to the park entrance.  It turns out we were on it.

The turn off by the famous Seneca Lodge, leads to the parking area at the south Pavilion, and getting to the campground from there is a short but steep drive. The South Pavilion also marks the beginning of the footpaths down the beautiful Glen gorge. Most park visitors rarely venture further up than the Pavilion, which also boasts an Olympic size swimming pool. The pool closes on Labor Day.

I asked the park ranger when we checked in about the Grand Prix weekend. She told us to get comfortable on Friday afternoon because we weren't going anywhere while the Village of Watkins Glen re-enacts the first Grand Prix held in America. The old, very first road racing circuit in America completely circles the State park and the campground, and it was going to be used once again for a vintage exhibition of the old Grand Prix cars on Friday. If you are inside the park, you might as well get comfortable as you aren't going anywhere until the roads reopen late Friday night. 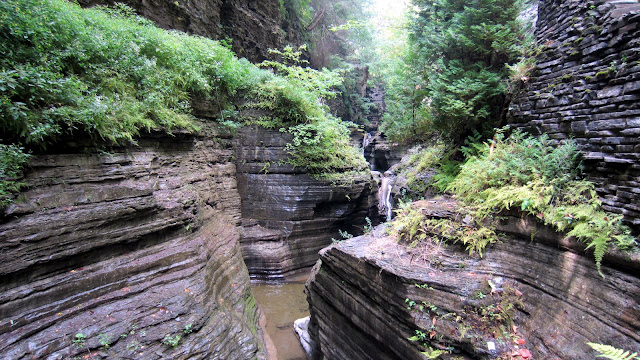 Getting comfortable here is easy to do. The toilet and showers facilities are first rate, and spotlessly clean. One would never know the Hordes of Genghis Khan had just spent three days there. The camp roads, however, reflect the age of the park. First opened to the public in 1863, and part of the New York's State Park system since 1924, the park has been a hallmark of New York's state parks. The roads aren't ruts or cow-paths, but they are old, single-lane asphalt, showing many winters and the passage of many, many campers over the years. Oddly, there are no signs for traffic control as the loops are not one-way. Campers have to fend for themselves when encountering oncoming traffic on the narrow, often twisty parts. It does get interesting at times, especially when two big units meet over the twisty creek sections. 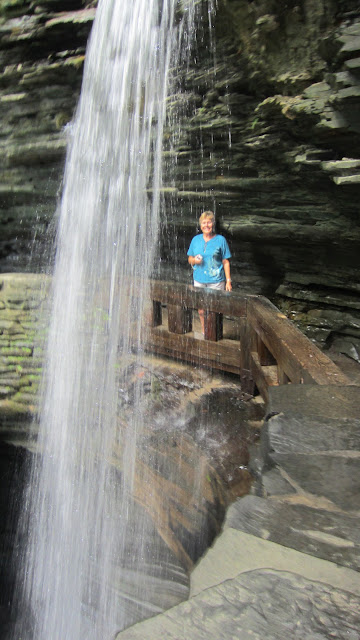 Our first evening was quiet and dinner went well. We were surprised when Taz, our Golden Retriever, leashed to the trailer outside, began to bark furiously and loudly for the first time in three months. Ilse and I were inside the trailer and immediately thought, “Uh oh, sounds like trouble!”  We rushed to the door to be surprised by our friends, Beth and Turk, who had graciously decided to drive to the campground to welcome us to New York. Taz was excused from his exuberance as he recognized our friends and neighbors from Florida. We made plans for the upcoming week, which have been logged into my memory as the highlights of the trip. I wrote my blogs about visiting with them before I finished writing the blog about the campground!

Ilse and I drove down to the South Pavilion to embark on our walking adventure down the gorge trail. It is a surprisingly beautiful trail, ending at the base of the gorge where the gift shop is located. We wind up only yards from the highway and the Village of Watkins Glen. We returned to the south entrance by climbing the rock staircase known as Couch's Staircase and walking casually back to the lily pond by the pavilion. A really great experience.

We made arrangements to meet our friends in town Friday afternoon, but as we passed the ranger's office, we were advised not to bother with trying to find parking in town, it was already gone. It would be best to simply walk down Couch's Staircase and we would find ourselves in the heart of festivities. So we parked at the south Pavilion and in just a few minutes we were at the bottom of the rock staircase. We met Beth and Turk once again, right at the bottom of the gorge where the Concours d Elegance winners were on display in the parking lot. Those are the classic cars that have been maintained in like-new, or show room condition! The entire parking lot at the entrance to the park had been taken over by the event organizers and the throngs of admirers were elbow to elbow.

It was like a walk back in time for me. One of the first cars on display was a pristine, black 1952 MG TD, identical to the car that Leonard Estrada owned back when we were all somebody else. We had driven his MG TD from Denver to Miami back in 1961 when we were in the Air Force, and seeing the old car brought back a flood of memories. It was to be a weekend of memories! While many, many old memories surfaced, many new memories were made.

If you are a sports car fan, put this one on your bucket list.  If you can make it to Watkins Glen for the Vintage Grand Prix, and if you are in an RV, I can highly recommend a really great place to stay!
For more information see: Watkins Glen State Park 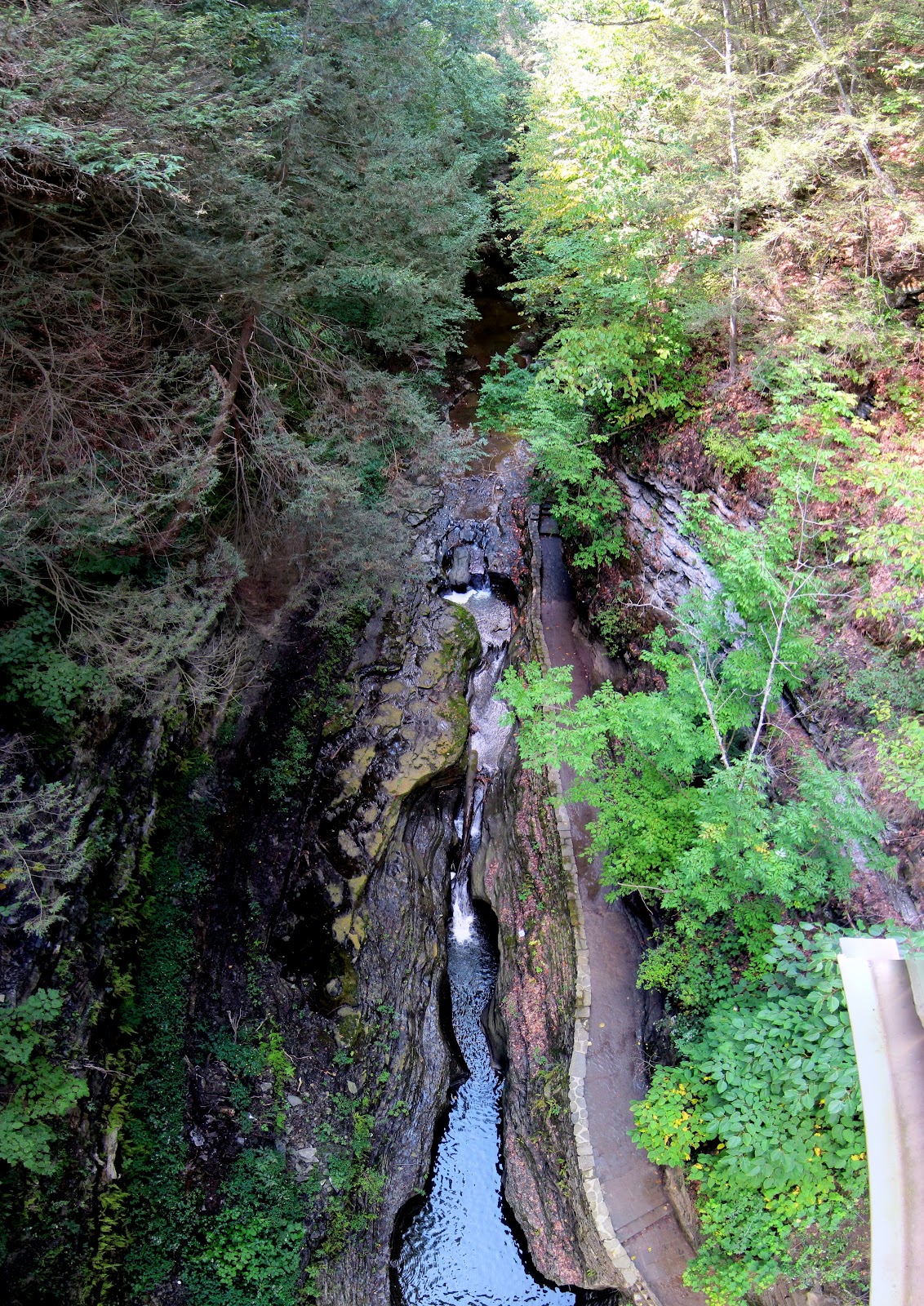 NEXT: In the neighborhood - more local information, at:
http://sleepstwo.blogspot.com/2012/09/pinnacle.html