Traffic slows considerably as you pass the crest of the new Jewfish Creek bridge headed south from the Florida mainland into the Florida Keys. You really can't see that far down Key Largo as the bridge at sixty-five feet really isn't that high, but you see you are about to be surrounded by water as you travel down the two-lane ribbon of asphalt known the Overseas Highway. I believe the other two high bridges, one at Channel Five and and the other in the Seven-Mile Bridge, offer more impressive views. Still, if they had built the Jewfish Creek bridge twice as high you could probably see all the way to Key West.

The recently completed bridge over Jewfish Creek, the sliver of water that separates main-land Florida from the alternative universe known as the Conch Republic, or, technically, the Florida Keys, replaces the old draw bridge that often created traffic jams that backed up to Tavernier and Florida City. One of our favorite campgrounds, John Pennekamp Ocean Reef State Park, is only a few miles south of the recently constructed gateway to the keys, and that is where we are headed. While we are there, we plan to stop at the other three Florida State campgrounds located in the keys as well, Long Key State Park, Curry Hammock Sate Park, and Bahia Honda State Park 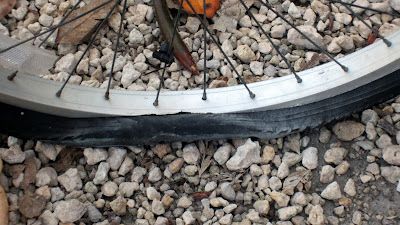 It has been an interesting ride so far. I learned yet another lesson about Recreational Vehicles as I had yet another heart-stopping mishap with my bike rack. Just because everybody else seems to do it doesn't mean it's the right way, or even the safe way, to do something. Let me 'splain.

I ended up dragging both my bikes along U.S. 41 in the middle of the Everglades when my bike carrier broke off at the base. Yes, again. I was only doing about thirty miles an hour at the time, but it made no difference as I was in the middle of a one-lane construction zone and could not get off the road. I'm positive it was the incredible pounding the rack took when we rode over several exaggerated rumble-strips. We didn't stop until we turned off the Tamiami Trail onto Krome Avenue. Mangled was the word that came to mind as I walked around the back of the camper and saw the remnants of the two bicycles securely attached to the rear bumper of the camper by a safety strap. I always put the strap on anything I carry outside a vehicle, and twice now, the safety strap saved me grief when something broke on the bumper hitch-mounted bike rack. This time, the carrier broke off at the weld at the bottom of the frame. 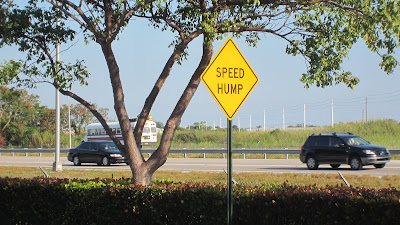 We loaded the damaged bicycles in the camper and propped them against the dinette table so they wouldn't move around and damage the interior. I tossed the broken bike carrier in the SUV for later inspection, and started down State Road 997, the two-lane road that is forty years overdue widening. Formerly known as US 27, and commonly known as Krome Avenue, the road hasn't changed much since we lived not far from the dangerous road many years ago. It certainly hasn't changed since it won world-wide notoriety during the Cuban Mariel boat-lift of 1980. Several traffic lights were added back in the early nineties, but the heavily traveled alternate road to south Miami-Dade County is still well overdue for modernization and widening.

We stopped at the Florida City Walmart, located just before the eighteen mile run down another anachronism of Florida politics, the section of U.S. 1 between Florida City and Jewfish Creek. I bought a replacement bicycle rack at the incredibly busy store, and the first thing I read in the instructions is to not mount the rack on any trailer. The warning is repeated several times throughout the installation instructions. That restriction was missing from the instructions on my first rack, but it certainly makes sense. Very few trailers have more than a rudimentary suspension. None I know of have shock absorbers. Speed bumps, or any other aberrations in the road's surface, are amplified at the rear of any trailer and the resulting violent, vertical motion is more than bike racks are designed to handle. I wonder how many other trailer owners are unaware of the danger of carrying bike racks attached to adapters mounted on the four-inch square bumper of their trailers. I now simply stow the bikes inside the camper, and no longer attempt to carry them outside the vehicle on a separate rack.

The only concession to safety on the bloody stretch of U.S.1 south of Florida City is a permanent concrete Jersey barrier, painted an appealing, Eco-friendly, sea-foam green, that now divides the two-lane road down the entire eighteen mile stretch of highway. Efforts to modernize and four-lane the road have always been defeated by those interests who want less traffic in the Keys, while all the while the Greater Keys Chamber of Commerce, along with the City of Key West and many other Keys-based tourist businesses, spend millions of dollars on world-wide advertising extolling the wondrous beauty of this unique tourist destination. In short, we ask German, French, and other European tourists to fly to Miami, rent a car and drive to the Keys and possibly get killed on a highway we don't want them to use. The almost daily head-on collisions have at least been eliminated by the concrete wall divider. Bad road or not, they come from around the world anyway. Europeans definitely make up a good portion of the tourists we meet in the keys, and many of them make John Pennekamp Ocean Reef State Park one of their first stops. The very first couple we meet and talk with are from Stockholm, Sweden.

We pull in after a five-hour drive from Port Charlotte, just over two-hundred miles. We came across one of my favorite drives, the Tamiami Trail, U.S. 41, from Marco to the turn-off at Krome Avenue. All was well except for the extensive road work being done between the old forty-mile bend and Krome avenue. Three separate sections of one-lane road closures will cure anyone of a repeat trip. We make a note to go back via Alligator Alley or up U.S. 27 to Clewiston and cut across county roads to Punta Gorda.

The Pennekamp park is one of our favorites, and the recently renovated campground makes it all the better. The campground recently converted all forty-seven campsites to full sewer hookup. With both 30 amp and 50 amp electrical service, water, and now sewer, the sea-shell gravel pads are just about perfect. Level, with nice separation between sites, with both shower and laundry facilities, the campground rates as one of the nicest we've visited. We can hardly wait to unhook and kick back.

NEXT: The Bicycle man of Key Largo, at:
http://sleepstwo.blogspot.com/2012/12/the-bicycle.html