The Bicycle and the Key Largo's Bike Man

I stared at the old man's eyes as he slowly walked around our old, damaged bicycle. I turned my head slightly, trying not to be obvious. He was as intent on the bicycle as I was on him. He recognized the copper-colored Lady Raleigh immediately.


His eyes went from the front fender, down the twin-tube upper frame to the pedals and back to the rear fender. The bicycle itself wasn't damaged, but the rear wheel and tire were mangled beyond repair. It didn't matter, I could tell he wanted the bike.

“It's been well kept,” he mumbled., as he fingered the curve of the rear fender. “Except for the twenty-seven inch wheel, don't know if I got one of those.” We were simply trying to make a decision: fix my wife's bicycle that fell in on U.S. 41 in the middle of the Everglades when my bumper-mounted bike rack broke, or scrap the damaged bike and go for a new one.

The bike didn't separate completely from the trailer because I always use a safety cable to keep it attached to the trailer in case of rack failure, it just got dragged along until I finally got to a spot wide enough to get off the road. The first time a bicycle rack failed I was on I-85 sandwiched between 18 wheelers. This is the second time it has happened to me, believe me,  it won't happen again.

I told Jack how the bike was damaged. “Oh, I get these that fall off bike racks all the time,” he replied. “Yours is not too bad.” 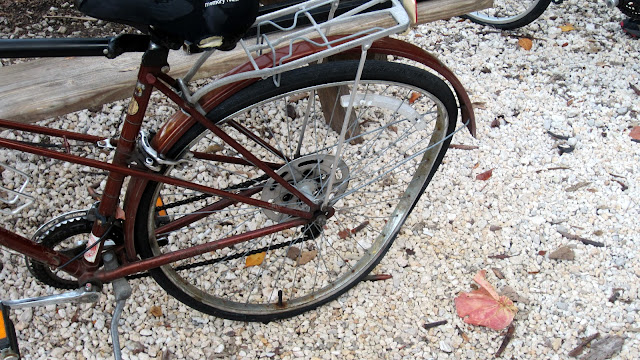 Eighty-some year old Jack Oewein owns Jack's Bikes, a one-man show run from a double storage unit at the U-Haul facility at Mile Marker 103.5 on the Oversea Highway in Key Largo. He has too many bikes for me to count stowed at various angles in the two storage units. He has classic bicycles from original dual-headlight Western Fliers from the late fifties and early sixties, to dust covered Sears Roebuck and J.C. Higgins cruisers, all tightly packed in his valuable little world. He can probably tell you anything you would want to know about any of them. He is more than a used-bike dealer, he is a bicycle historian.

“Yep, got start selling this stuff off,” he says, waving his arm vaguely in the direction of the storage unit, “I'm getting' too old to hang on to all this stuff.”

Nevertheless, he wanted the Lady Raleigh we placed temptingly in front of him. The Lady Raleigh had the traditional skinny road tires that my wife wanted to get rid of. She couldn't go off road in any sense of the word, and wanted a bicycle more suited to dirt or gravel roads. My old mountain-bike damaged the front wheel and tire, and luckily, suffered no other damage when it too, crashed to the highway.

“Tell you what, I'll fix your bicycle,” pointing at my old, black Huffy,” and I'll toss in that women's Giant you're wife is looking at for your Raleigh and a hundred bucks.” Ilse had just fallen in love with a rebuilt Giant with thumb shifters he had on display in the gravel driveway. She had ridden it around the U-Haul lot and was ready to bargain with Jack. No bargaining required, we were both getting what we wanted. A hand shake and we soon loaded my fixed bike and Ilse's new knobby-tired Giant with the shifters she loves on our brand new bicycle carrier, mounted securely on the back of the Sequoia SUV. He did OK, and so did we. A great way to start our Keys vacation.

NEXT: Birthday Dinner in the Keys, at:
http://sleepstwo.blogspot.com/2012/12/birthday-dinner.html