Camping with our Furry Friend 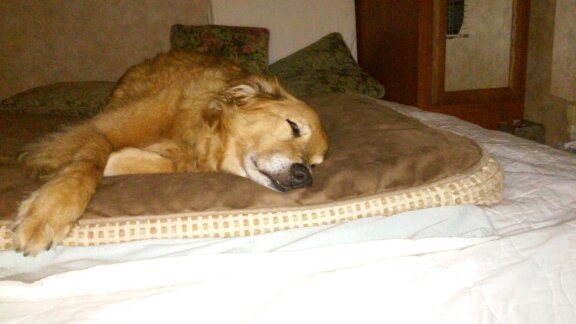 Taz, our twelve or thirteen-year old, mostly Golden Retriever, will rudely interrupt a conversation we are having with friends if he thinks we've wasted enough time talking when we should be walking him. He barks whenever he has something to say, and that can often be embarrassing.

People who don't know him are taken back by his ferocious bark, especially when it's unexpected, such as in the middle of a pleasant conversation with people we meet in campgrounds. He sounds like a much bigger dog than only forty-five pounds. His bark is dominating among dogs, and quite intimidating around people who don't know him. He doesn't bark for fun, though. Some of our friends have never heard him bark except to say hello.

We found out Taz is a “talker” when we had him in obedience school. That's what the instructor called him and she was right; he actually tries to talk. Out of water? No problem, he'll tell us. Don't want to interrupt our walk and talk with someone? He tells us exactly when it's time to go. Dinner? Oh yeah, no problem there either. He is really well behaved and follows commands without hesitation. He doesn't touch anything he is told not to touch, even food. He is not a yapper. When he barks, he is trying to say something.

He's a rescue dog with a past we haven't been able to figure out. He has an undecipherable tattoo on his inner thigh, but does not have an imbedded chip. He has a torn ear and a scar across his belly that goes almost the entire length of his abdomen. He has a severe gash on a front paw and his right hip was crushed when he was younger. Our veterinarian x-rayed his hip and was astonished Taz walks as well as he does; his hip socket looks like a cauliflower. And he doesn't like the water. He loves boat rides, and will splash around the water's edge, but swimming is out of the question.

He's a smart dog, but he's been known to not play well with other dogs. He has no tolerance for aggression. Any dog that foolishly threatens him is in for a ferocious fight, and I don't mean for fun. Taz is kept in quarantine around other dogs to prevent flashes of aggression that seem to come out of nowhere. He is another reason we have the travel trailer; he sleeps with us in the camper and avoids staying in our daughter's house when we visit her and her family.

Taz is persona non gratis, or more properly, canine non gratis. He's not allowed inside as he was a bad house guest and was ungratefully rude to our daughter's Black Labrador.  He loves people, though, all people. He has never met anyone he didn't like. As long as you stand upright on two legs, you're his buddy, his friend, his source of gratification through petting, and he'll wag himself silly to say hello.

He didn't eat this morning, and regurgitated what little was left from last night's meal. We have to be careful as we don't know if he is reacting to something he might have picked up from one of the many other dogs in the campground, or if it is symptomatic of a more serious, chronic ailment. One of the drawbacks of being on the road and not having a reliable veterinarian to call on. We'll find out in the morning, right now he's lying on his bed watching us and wondering if we'll ever shut off the lights and go to bed.

NEXT: Earning our decal, a going away gift at Vogel, at:
http://sleepstwo.blogspot.com/2015/09/going-away-gift.html