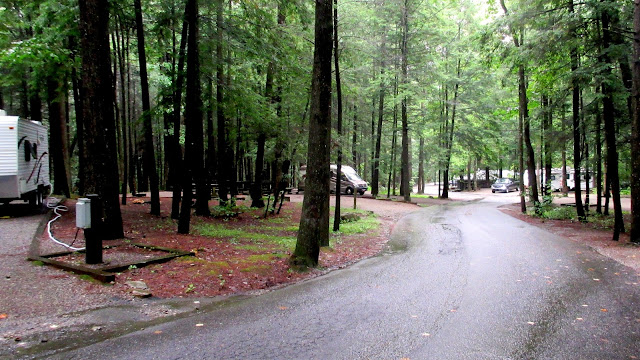 It's quiet, as still as a forest should be in the dim, early morning light of late summer. Not a sound from outside. I carefully, slowly use both hands to peer through the horizontal metal ribbons that form the Venetian blinds. Not a soul to be seen in the heavily forested campground. The few trailers and recreational vehicles parked to the side of the main road like branches on a tree seem lifeless. There is no sign of activity anywhere. The wet, narrow ribbon of asphalt leading to the campground shower is barren, giving hope to the fact the restroom and showers are as empty as well.

I quickly grab my shaving kit and check to see if I remembered to replace the small, oddly shaped piece of soap that looks like a very small saddle. Yes, a new bar is safely in the plastic case, so I grab fresh underwear and my camp towel, slip on my shower clogs, and quietly open the trailer door. I look around before I step out, as if perhaps I was being watched by professional surveillance teams, and once I assure myself no one else has ventured into the realm, I step down carefully, one step at a time, breathing the heavy, smoke laden air from the campfires that had burned late into the night. As I slowly walk to the road a small bird silently flutters across the campsite, the only sign of life, but it is no threat to occupying the small shower stall that awaits me.

I glance uphill, toward the cul-de-sac, luck is on my side, the road is empty. I turn and head quickly down the road, I only have one hundred or so yards and a hot shower awaits. I speed up, as if I'm racing an unseen competitor, and, suddenly, I am competing with someone! A heavy-set man in his late forties steps into the road between me and the bath house and stops to look at his shaving kit. Where did he come from? I speed up, flopping noisily now, practically running to get ahead of him, but he looks up and sees me coming. He quickly bolts for the bath house. There is no way I can intercept him or pass him. I resignedly slow my pace. At least there are two showers, so not all is lost. I doubt he'll use all the hot water before I finish.

But catastrophe strikes just as I turn on the final path to the door; another camper comes around the corner of the bath house from the other side, his red towel draped around his neck like a horse collar. The first gentleman graciously holds the door open for the johnny-come lately and they both enter together. Damn! Back to the camper. Time for another cup of coffee.

NEXT: Camping with our furry friend, at:
http://sleepstwo.blogspot.com/2015/09/camping-with-our-furry-friend.html