I have to admit, I'm tired of eating elephant. It was a big, 3,500 pound beast, white with black and red decals, double axle with a queen size bed, and the source of many really great memories. I finished the last bite this afternoon. It took about two months to finish, chewing and tasting about four to six hours a day, usually three or four days every week. Well, except for the three weeks I took off during the Christmas holidays to eat turkey and occasionally crow. 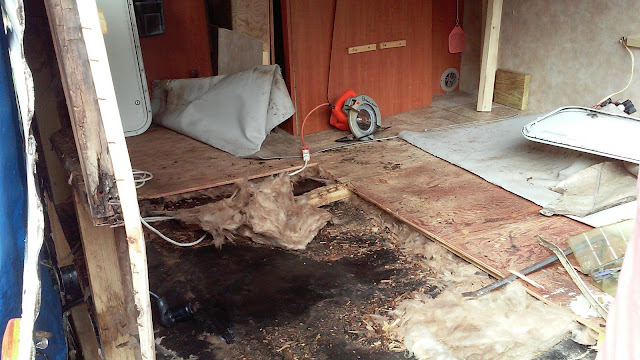 It all started one morning last September when I stepped out of bed in our KZ Sportsmen travel trailer and felt the normally solid floor beside the bed had a soft spot. In the RV, Recreational Vehicle, realm, this common problem is known as a “spongy floor.” My wife, Ilse, and I were camping in the Georgia mountains a thousand miles from home when I first discovered the problem, and after some tentative probing and carefully inspecting the trailer, we decided to wait until we got back to Port Charlotte, Florida, before we undertook any serious repairs. No need to tear up the trailer while we were still living in it. It was going to be miserably hot and humid when we got back to Florida, so rather than worry about it right away, we would wait until the end of October before tackling the problem.

After parking the trailer for a month or so, we had a serious discussion about what I could do and not do. We decided this was for the professionals to fix, so we towed the five-year old trailer to a local RV repair shop we used in the past and asked for an estimate to restore our compact little home on wheels. The RV technician walked around the trailer, poked and prodded, made a few guesses, then finally gave us his analysis, and his morbid prognosis.

“Well,” he started,”It will probably be between four and six thousand dollars, depending on what we find when we take out the old floor.” He paused, scratched his chin, and continued; “You could just pull up the linoleum and put a piece of plywood down and just sell it as it is.”

My wife and I exchanged understanding glances. We wouldn't be using this shop, no matter what happened. We hauled the trailer back to the house and parked it alongside the garage so I could have electrical power to it and began by pulling up the old linoleum over the soft spot. The plywood floor was rotted over quite a large area, and as I pulled out damp, moldy pieces of plywood, I was stunned to see the cross members under the floor were also rotted. The more rotted wood I pulled out, the more I found. It just kept getting worse and worse. The wood was rotted as far as I could see. The bed and closets would have to come out to see how far the damage extended, but that wasn't the real problem; I had no idea where the water that caused the rot was coming from. I would have to find the leak and fix it before I could attempt to repair the floor.

I spent that first night scouring the Internet and YouTube looking for information, and I was actually overcome with despair, something I had never experienced before. I always see an answer, a way or a solution to every problem. I always have. It is a skill, or a talent, or just an outlook, whatever, that got me to the position of Technical Specialist in the computer repair business years ago in a past lifetime. Not running out of ideas has been my trademark for years, but not this time. I watched video after video and realized I had nothing but hard, tedious work ahead of me, and I had no idea if I had the skills or tools required to fix a simple “spongy” floor.

The next morning I got serious about assessing the damage and began tearing out the interior of the trailer. The more I pulled apart, the more I realized the videos I had watched the night before were only a foreboding of work to come. I sat on the edge of the mattress before I tore out the bed and looked around the trailer. Ilse came in and sat beside me. We talked about the long-term commitment needed and we decided to give it our best shot, but I still couldn't shake the gloom of spending the winter working on the trailer.

We called Monica, our daughter, and she could tell I was having a bad day. After discussing our situation, she was quiet for a moment, then asked the old, rhetorical question about attacking an insurmountable obstacle. “Dad,” she said, “How do you eat an elephant?”

With the help of my neighbors Al and Charles, who supplied pickup trucks to carry sheets of plywood and air-powered staple guns, among moral support and plenty of suggestions, I decided to undertake as much of the rebuilding on my own as possible. If something got messed up rebuilding the trailer, I wanted it to be my fault, not someone else's. Besides, how hard could it be to pull the aluminum skin off a trailer? Oh yeah, and replace it as well. Ilse and I found out, and believe me, it was a team effort.

To say it has been a journey is an understatement. It was the rainiest winter in Florida I can remember with over twelve inches of rain in January alone. Several multi-day storms rolled through our little sub-tropical paradise with winds that ripped the huge canvas covers I had to reinstall every time I finished a day's work. Covering and uncovering the open, vulnerable trailer did not add humor to the task. I don't like climbing on top of the camper to start with, and doing it twice a work day just added to the repair time. We also decided to alter our daily work schedule to start later each day when the temperature would rise close to 60. I am not a fan of cold weather. We found three water entry points, two in the very front along the front seams on each side of the trailer, and one about halfway up the right wall corresponding to a pass-through door retaining latch that was held in place with two rusted screws.

I replaced all the rotted or water stained wood - luckily no water was running down from the roof - and I replaced all exterior screws with stainless steel screws, and resealed everything we put back on at least twice, including the aluminum skin. I also found the RV manufacturers - none of them, apparently - caulk under the bottom half of any light or fixture in the trailer's skin. They believe water runs downhill so it isn't needed on the bottom of any extrusions that pass through the skin of the units.  Apparently they have never used what they build. Driving in a pouring rainstorm at sixty miles an hour forces water into every possible crack and fissure. While the manufacturers save literally only pennies, they will cost owners like me a small fortune in mold and wood rot. We checked our unit for leaks continually for the short five years we have had it and had no idea we had a rotted unit until we pulled out the linoleum flooring. For the uninitiated, unmitigated water damage is not covered by any insurance policy.

Ilse painted the new Luan front wall to match the decor and we picked a new champagne colored carpet for the carpeted area around the bed. Today, just before Valentine's Day, in the finally warm Florida sun, I laid the last piece of new flooring. After sitting on the newly reinstalled mattress having a glass of wine, we decided to re-christen our rebuilt trailer with a four day camping trip during the Easter weekend. Shades of our very first camping trip with the KZ back in April, 2011, when the only camping spot available anywhere in the Florida State Park camping system was in the middle of nowhere, the Kissimmee Prairie Preserve State Park. We took that last open site, and thoroughly enjoyed our stay. This time we wanted to stay in Anastasia, or Wekiwa, or maybe Rainbow Springs, but lo and behold, only one camping spot was open in the entire state park system. The only spot in Florida was once again at Kissimmee Prairie Preserve State Park.

So, we booked it and we'll be on our way after we finish cleaning the camper and maybe even giving it a coat of wax. But I have to be honest; after four hundred dollars and many, many hours of self examination, I am really, really tired of elephant. It was quite simply one bite at a time.
The Photo Album link has been moved to
Photo Album of Eating An Elephant