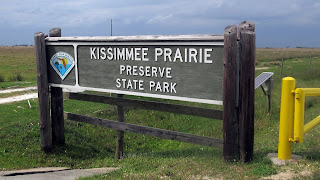 “The third time is a charm,” or so an old saying goes. We were about to find out as we signed up for a four-night stay at Kissimmee Prairie Preserve State Park, about thirty miles north-west of Okeechobee, Florida. We made reservations in mid-February for the upcoming Easter weekend in late March. This would be our third stay at this unique campground, and for the second time, we ended up here because every other campsite in the State of Florida park system was already reserved. And once again, we grabbed the last remaining available camp-site. Not that we don't like the Kissimmee Prairie Preserve – we have a strange love affair with this remote place – we just wanted to try someplace we haven't camped before.
Our twenty-foot KZ Sportsmen had been parked for the last five weeks, ready to go somewhere, anywhere, ever since its massive, two-month long rebuild to replace the “spongy” floor. After spending most of January and February working on the trailer, it was time to test our repair work and see if we succeeded in restoring not only the trailer, but our desire to tow it cross country and actually live in it. The upcoming three day Easter weekend was perfect for us to find out. 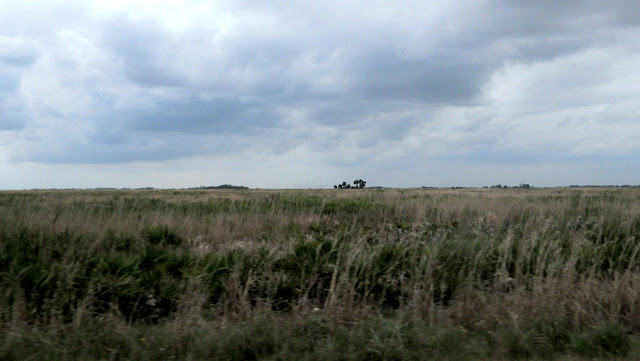 We decided to minimize packing and preparation and keep it as simple as possible, but we wanted to take a real break from the household chores as well. So, a four-day camping trip was planned, we just didn't take too much with us. We didn't get to pick the destination, that fell to the scheduling gods who once again dictated a one hundred and fifteen mile trip to a spot most people would avoid based on first impressions. We took the last available spot, located in the equestrian loop, and hoped we could move if there was a cancellation on the main loop. The equestrian loop is located in a hammock of stately live-oaks, but the restroom is a simple chemical toilet, as opposed to the spotless shower facilities on the main loop.

Two and a half hours after we pulled out on the highway headed east, we were happier than children who find the golden Easter egg. We enjoyed an easy, dry, uneventful trip into the very middle of flat, cattle-country Florida, where we met Kathleen, the really sweet volunteer manning the reservations desk. She switched us to a really great site on the main loop that had just been made available due to a cancellation. It turned out to be the best site in the campground, and, no, I won't tell you which one. Things were looking up.

To be honest, we really like Kissimmee Prairie Preserve State Park. It is flat as a board, and is the only area I know of in Florida that has nesting Caracaras. In our previous stays we've watched mother alligators with hatchlings right up against the access road, wild turkeys photo-bombing my wife's innocent snapshots, and a cotton-mouth water moccasin known as Maury that did a daily constitutional across the main camping loop access road just a few yards from the camp-host tent. We've seen many deer here, and an occasional raccoon. I even have a photo I took of a confused, defensive crawfish that wandered through our campsite. What could this trip possibly uncover? It only took twenty minutes to find out.

I admit we did something this time we have never done before: we broke a camp-ground rule, a first for us. What happened wasn't the result of that spontaneous decision, it just made our apprehensive decision all the more special. Breaking the rules turned into a real heart-stopper.

It was the very first time we've ever let Taz, our Golden Retriever off leash as we walked the barren one and a half mile dirt road that serves as the main park road. With no traffic to be seen from horizon to horizon – here, that's not a metaphor – we felt safe allowing him his first ever taste of freedom on a camping trip. Ten minutes into the walk, a huge, wild boar strutted unconsciously out of the palmetto underbrush and stopped at the edge of the dirt road about thirty feet in front of Taz. The hog appeared to be considering whether or not to step onto the road when it finally realized we were there and looked up at us. Taz and the hog stared at each other while Ilse quickly hurried to snap on Taz's leash. By the time she looked up, the hog was gone. No trace what-so ever of any pig, just our confused Golden Retriever sniffing the air wondering what had just happened. 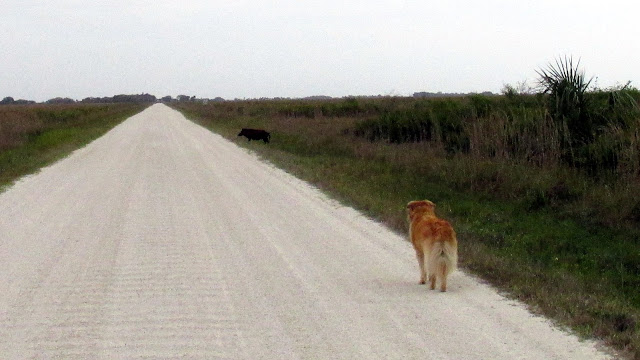 The following morning we were informed by a park volunteer that the U.S. Department of Agriculture recently conducted a hog removal program in the preserve, shooting the unwanted pigs from helicopters. Visions of Sarah Palin hanging out of a helicopter wildly shooting at wildlife made me root for the hog. Go, hog! We won't tell the state we saw you. In all fairness, the hogs are incredibly destructive and something has to be done to control their dominating expansion across public lands. A sow can have a litter of fifteen piglets, and three months later, they can also breed, compounding the problem their natural predators have all but been exterminated. Still, my heart was with the hog.

We wanted to stay at the highly recommended Lake Kissimmee State Park just outside of Lake Wales, but getting a camping slot at the popular state park is difficult. We met Sam and Sandy while walking through the our campground, and they confided they made reservations at the Kissimmee Prairie Preserve State Park in error. They thought, as many campers do, that they were making reservations at Lake Kissimmee State Park. They were surprised when their GPS brought them out to the middle of nowhere. The Lake Kissimmee campground is 35 miles away, as the Caracara flies, but ninety miles if you decide to drive. Sam and Sandy decided they liked the campground at the Preserve and were very happy to be here, but they just piqued our interest even more.

After walking Taz, we locked the trailer and headed toward Yeehaw Junction on the road to Lake Wales, the shortest route proclaimed by our trusty GPS. Yeehaw Junction is just a few miles from the Fort Drum rest stop on the Florida Turnpike.

The drive on Florida Highway 60 from Yeehaw Junction to Lake Wales is enough to cure a normal person of any urge to do it twice.

While we really appreciated the really great attendant at the main gate at Lake Kissimmee State Park who gave us a 30 minute guest pass and all the camp documentation allowing us to tour the park, we decided we were camped at the better park and headed back. We chose to drive back down US 27 to Sebring, coming back to the park on US 98 from the west side, instead of returning the ten-mile shorter way on highway suicide 60 and US 441.

We made the circuitous 192 mile trip around the Kissimmee Prairie Preserve in a little over five hours and were looking forward to our traditional spaghetti dinner and a glass of wine. We were laughing and talking about how lucky we had been with this trip and commenting on how well Taz had behaved as we headed up the dusty, main park dirt road.

About a mile after passing the main gate, we drove past a large, black bird with a white neck that looked like it had on a bad, black wig, sitting on a post just off the roadway. I slammed on the brakes, then changed my mind and drove to the first place to turn around. We drove back slowly, not expecting the bird to still be there. But still sitting on a power transformer post waiting for us was a Crested Caracara. It didn't fly off and Taz didn't bark as we rolled to a stop directly alongside its perch. It simply watched us as we turned on our cameras began snapping away. 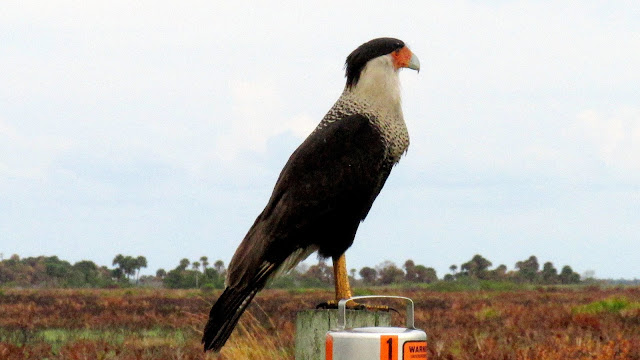 It actually acted as if it were posing for us. It turned this way, then that way, and several times stared directly at us. I took enough photographs of the usually reclusive raptor to fill a scrapbook be­fore I made the mistake of whistling and of course, Taz barked. But not before I finally had enough photos of the national Mexican eagle to keep me busy the rest of the evening.

Yep, the third time is a charm. And we still have three days to go. 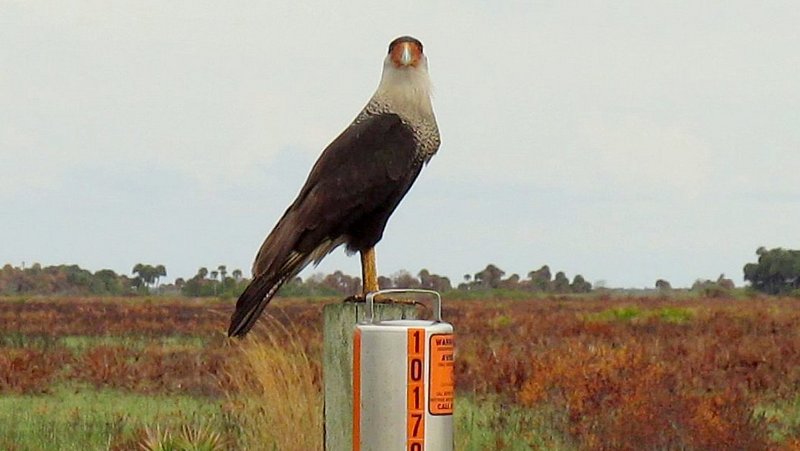 Next: Tough Little Buggers! At:
http://sleepstwo.blogspot.com/2016/09/tough-little-buggers.html