"F. Scott Fitzgerald stayed at the hotel for two years to write while his wife Zelda was in an insane asylum in Asheville. The rooms in which he stayed, 441 and 443, are available for guests. One is furnished exactly as it was during his stay in the 1930s. Rooms in which famous people stayed are marked by plaques on the door saying who stayed there and when.”


They both simultaneously went “Oomph!”; The Jamaican maid blindly pushing a fully loaded linen supply cart and my wife, Ilse, who was standing about four or five feet from the wall of photographs, engrossed on taking the perfect photograph, when the maid pushed the cart into her. 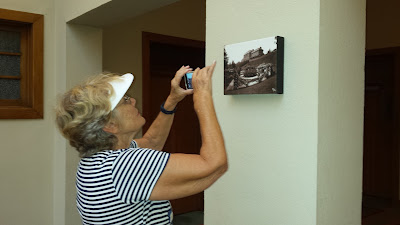 The linen cart hit Ilse squarely in the back as she faced the wall taking photos. The maid thought she simply had to push harder to overcome the unexpected obstacle, and so she gave the cart another good shove, hitting Ilse again just as my wife turned around to see what had just run into her.

The maid looked around the edge of the cart after the second impact to see Ilse staring back at her in amazement and immediately panicked. Ilse began to laugh, but the maid’s fear overwhelmed her. The thought of hitting a guest with a laundry cart, not once, but twice, terrified the young woman. I’m sure visions of legal actions and probable termination flooded over her. Ilse, still laughing, walked over and put her arms around the maids’ shoulders. The maid’s relief could be felt all the way over to where I stood talking with Delores, the immaculately period dressed operator of the unique, 103 year old elevator, who had graciously taken time to give us a tour of the historic old section of the iconic Asheville landmark.

Delores had just told us the poignant story of the “Pink Lady,” the ghost of a young lady who fell to her death in the covered atrium from the upper floor. She was found dressed in pink, and, according to legend, her ghost has visited unsuspecting guests ever since the 1920’s. Apparently she likes to playfully flip unsuspecting ladies hair.

Trying to find our way out of the massive labyrinth and back to the car was an adventure in itself. We ended up in the wrong wing, but the right wing, just in the wrong place. Yes, it was that confusing. Ilse and I had walked from the lower parking garage specifically to enter the world famous Grove Park Spa through the long, impressive grotto. The modern, 40,000 square feet subterranean spa cost a whopping $44 million, and, placed in the top 15 spas worldwide in 2008. It was worth seeing even if we didn’t partake of any of its services. 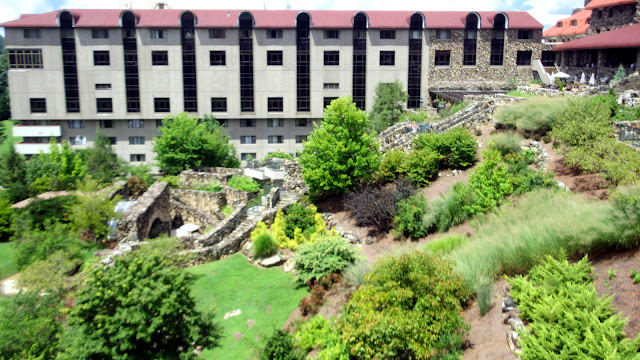 I asked Ilse if anyone had flipped her hair while we were wandering around the hotel.
“Why?” she answered, “Want to ask her if she knows where the parking lot is?”

I don’t think she would have found it either. 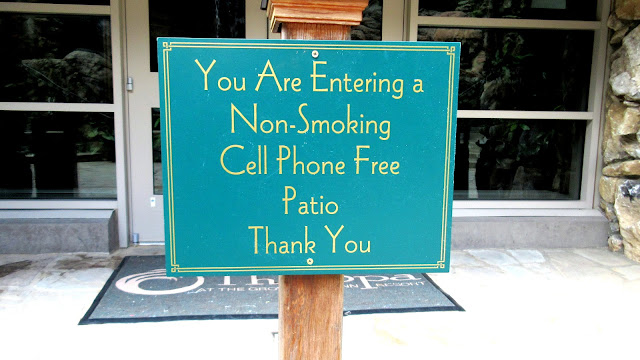 Reflections - Questions from friends who are considering buying an RV - at