Being a curious person who occasionally finds answers to questions I didn’t know I was asking, I came across the odd fact we’ve towed our twenty-one foot travel trailer over 21,357 miles in just a little over five years. Add that to the 5300 miles we towed our first trailer, a thirteen foot Cikira, and you find that nobody cares but me, and perhaps a few polite friends who suddenly remember they left the kettle on.

So, how do I write a blog that tells the truth about towing an RV trailer and not bore the reader who really, really wants to take the leap into RVing but still has trepidation about taking the financial and, yes, social burden of being unhinged, er, uh, unanchored. Maybe unfettered. No, on second thought, RVers are still fettered, just to a different anchor. Well, let’s say a different attitude. One that is hard to explain to anyone who thinks towing a trailer around the country is folly. Now, there’s a really appropriate, underused word. And, yes, it is a leap. A rather large leap for most people. For example, where do you park or store your expensive alternative universe when it’s not in use? We are fortunate to live in a county that allows us to park one RV/trailer adjacent to our domicile if certain requirements are met, and most people who visit us have no idea we have our trailer tucked away a few feet from the house. Most people must pay for storage of their RV when it’s not on the road.

Having a trailer instead of a self-contained motor home means I don’t have to insure it or register it as a motor vehicle, only as a trailer. But, let’s back up. Why are you towing a trailer or driving a motor home in the first place? Are you a traveler or a camper? Yes, there is a difference. Travelers rarely stay in any campground more than a day or two, usually as a respite from their journey from one place to another. Campers, on the other hand, travel to get to the location they want to spend time at, and once they’re there, their stay is usually as long as possible.

Most of us fall somewhere in the middle of being campers who travel or travelers who camp. There are those extremists so enamored with the thought of real estate freedom that they actually forsake a permanent residence altogether just to be “free.” Selling a house, which normally is an appreciating asset, for an RV, which is a depreciating asset, is a financial decision that takes far more than just a belief you’ll one day win the lottery or a rich relative will someday send you a check to make up for your financial loss. Those who sell everything to shed the shackles of noblesse oblige may be placing themselves at the mercy of trailer assemblers somewhere in Indiana who really don’t care who buys their efficiently assembled masterpieces.

Worse yet are the self-contained RVs such as the Class A and popular Class C’s sitting in repair shops with blown transmissions, overheated engines, or dented front ends. So much for your pop-up fire place if you can’t get to it. Don’t forget to add hotel rooms to your emergency expenditures budget. 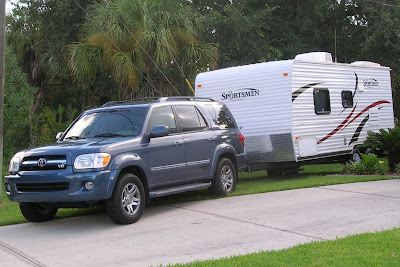 Do you like having your mail picked up by a neighbor? Do you care if they forget to tell you there is a jury duty summons that came three months ago? Then traveling from campground to campground may be for you, hooking and unhooking water hoses and power cords, raising and lowering jacks and pads, emptying black and gray water holding tanks, and trying to remember if the reservation for your next campsite starts on Sunday or Monday.

When, you ask, does the good part start? It starts even before you pick up your first trailer. The anticipation of what is ahead of you will cause wild dreams and childish glee. Your first night in the Smoky Mountains with a campfire with only you and yours is something you won’t forget, and probably very close to what you envisioned. Kayaking in the streams and lakes of Georgia with no one else in sight ranks right up there. As the reality of those dreams come true, the joys of traveling in an RV come to fruition. There is no other way to vacation or travel that comes close. It is also the only way to take your pets with you, and most RVers we've met have either have their dogs or cats with them. Ours go with us every trip.

Privacy to us is paramount, and we shy away from commercial campgrounds that find space utilization is more important than solitude. Sardines in a can have more space between them than given to most commercial campsites. We have slept only three nights in commercial, private campgrounds of the 448 nights we’ve camped, and then only because we had no close-by alternatives. All the other locations were lakeside at U.S. Army Corps of Engineer campsites, or at state parks from Florida to New York, or U.S. Forestry campgrounds in the Appalachian mountains. Or in our daughter’s driveway, although we now have a perfect designated camp site adjacent to the house.

We certainly have our favorite campgrounds and there are several we’ve visited many times. There are several we won’t return to as well, but the adventure of going in the first place has always been worth the trip. We have grown to our trailer size limit. People have told us every camper you buy will be bigger and better than the one you owned before, but we maxed out on our second unit. The thirteen footer we started with was just big enough to get us hooked on camping, but having to convert our dining area to a bed every night convinced us to go bigger. Twenty-one feet has proven to be our size. We have looked at longer units, and those with slide outs that increase width instead of length, but none offer benefits to offset the cost of replacing our current unit.

We upgraded from our first tow vehicle, a V-6 GMC Jimmy with a tow package, to a V-8 Toyota Sequoia, also with a factory tow package, so we could handle the extra weight of the bigger unit. Gas mileage remains the same, with an average of about 9 miles to a gallon. We get from 10 to 11 miles a gallon under good conditions, and around 7 miles a gallon in Florida on flat roads, always doing less than the 65 mile per hour speed limit. I’m convinced the ethanol added to Florida gas kills my mileage as it always increases as soon as I get to Georgia and North Carolina. It is a paradox my mileage goes up when I get to the mountains. 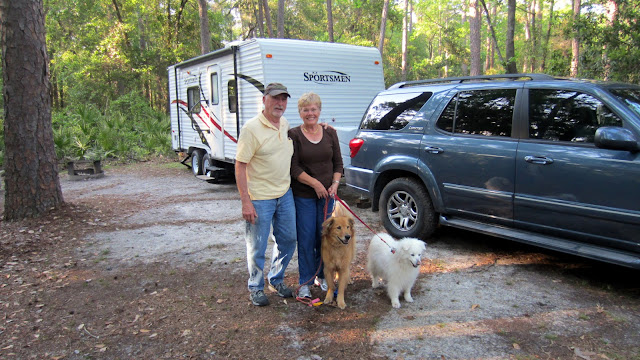 We don’t want a bigger trailer because we don’t need a bigger trailer. Many state parks have size limits, usually 24 or 26 feet, something we don’t have to worry about, and it is far easier to tow a small trailer through a crowded gas station. We’ve learned the limits of using our gray and black water tanks, and have learned how to extend our setup to over two weeks without unhooking and heading for a dump station. Those secrets will not be shared here. Let’s say utilization of available facilities becomes paramount.

I’ve only scratched the surface of the experience here, and if you’re interested, I’ll post the next installment of the narrative for the benefit of all. Well, for the benefit of those interested in watching a black bear drop out of a nearby pear tree, or having to coast in a kayak while a twelve foot alligator swims lazily across your bow. How about waking up to a fog covered Florida prairie being watched by a Black Crested Caraca?

It isn’t for everybody, but it is for us. 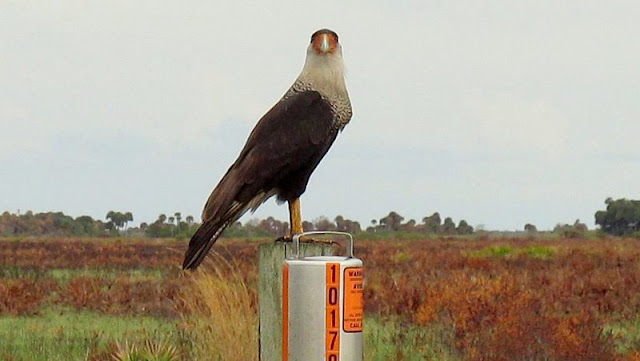 So, where do you go from here?

Email ThisBlogThis!Share to TwitterShare to FacebookShare to Pinterest
Labels: Campers or travelers?