The thing I like best about camping is also the thing I like least about camping: Dogs. My English teachers are probably having an eye-rolling contest right about here, but the sentence stands. Dogs are the common factor in my paradox. But I really don't hate dogs. Dogs have always been a part of my family. The only time I haven't had a dog was when I was in the service or when my wife and I lived in an apartment right after my discharge. Our daughter grew up with two of the most wonderful dogs ever. No, what I really dislike most about camping are inconsiderate dog owners. There, is that better Mrs. Rasmussen? 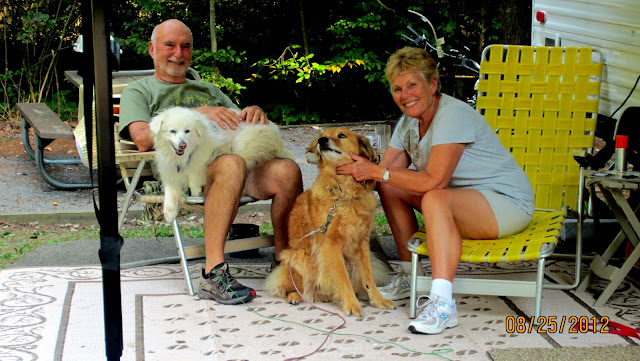 We take our dogs, Daisy and Taz, with us everywhere when we travel with our trailer. We actually started RVing so we could take them with us. Worrying about our pets being caged in an indifferent, perhaps even hostile kennel, is like putting them in a maximum security prison and then wondering if they are having a good time. “Sure, Master, we love solitary confinement!”

We once picked up our Golden Retriever, Taz, after a ten day stay in a kennel and he was so hoarse he couldn't bark for well over a week. No, they come with us and we all make the best of it. Seven-year old Taz is lying on the bed watching me as I type this. Our thirteen-year old Samoyed mix, Daisy, is asleep on the floor, oblivious to her surroundings. As long as she's with us, she's happy.

Let's see, how do we differ from the dog owners who spoil our camping experience? Well, for starters, we clean up after our dogs. Always! We know our dogs don't have the intelligence to not dump a load of excrement wherever he or she feels the urge, and if they do happen to pick an inopportune time or location, we always clean up after them. We always carry plastic doggie bags, and most campgrounds have doggie-bag dispensers located around the campgrounds. We walk our dogs in areas where they don't interfere with other campers or their children, and even then we still insure no one will inadvertently discover a fecal reminder of our visit. Taking that little bit of time and making that decision is the responsibility of the pet owner, but unfortunately many dog-owning campers think just like their dogs. Wherever they happen to be when Fido gets the urge to take a dump is just fine with them. Cleaning up after their dogs never crosses their minds. There is no shortage of people who have no consideration of anyone else. There are times I think their dogs just might be smarter.

For example, take the people who are camping next to us at Raystown Lake. They'll be here Friday night through Monday morning with four large dogs, all of which are leashed at various locations around their campsite. Apparently they can't tolerate each other so they have to be separated. The dogs are pooping in all four corners of their little shire, which apparently is odor free as our neighbors and their two adult children are spread out in hammocks and sling chairs with drinks in their hands, totally oblivious to the indiscriminate piles of solid dog waste that totally surround them.

Another major problem are the unleashed free-roamers of all sizes and shapes that suddenly rush out, barking wildly, from their owner's campsites to confront our normally affable, goofy family friend walking with us on a leash, turning him into a snarling, 45 pounds of defensive fury. “Gee,” they say, “Fido is just being friendly! We don't understand why your dog is so upset!”  Well, gee, if I charged at you yelling at the top of my lungs, what would you think?

There are quite a few people, especially parents, who are rightfully fearful of untethered dogs in a campground. My wife had a pooch stick his head under her bathroom stall yesterday, another first for us in our camping experience. Ilse assumed the dog's owner was also in the toilet, but the owner was sitting at his campsite a hundred yards away. The dog was running around loose and simply wandered in the open door to the shower room which had been propped open. The owner was miffed at us when told to leash his dog! Dog licenses should require a test for the owner. This "owner" would have failed.

Thirdly, we can not believe the number of people who think they can control their dogs on retractable leashes. It can't be done. Just watch the Caesar Milan television show, the Dog Whisperer. He'll tell you what most dog owners already know; throw the retractable leashes in the trash! They will get you into trouble in a hurry, and quite often give you a good rope-burn in the process.

And then there are the barkers, the yappers, the howlers, the pets left unattended for extended hours while their owners go out on the boat or go to town, or pass out somewhere around the campground, leaving their pets abandoned at the end of a leash in strange surroundings. It isn't the dog's fault they bark, it is the owner's, and they are the ones that can be evicted for violating the rules. We have seen campers evicted twice on this trip for barking dogs.

RVing, camping, sitting around a campfire or whatever name you give it, is really a community. A community made up of temporary residents who share similar likes and interests who sporadically gather in random locations specially designed and set aside for just them. Some have a love for the camaraderie and togetherness of the communal campfires, others simply love the solitude of nature. We all love being outdoors. An overwhelming majority bring their whole families, and that includes pets. Most pet owners we have met are responsible, loving owners who spend considerable time and money to bring their dogs and cats with them. It is the irresponsible few that result in some campgrounds closing their facilities to pet owners. There are more than a few campers who pay for the solitude and cleanliness of a dog-free environment and I understand them completely.

We have met some wonderful people on this three month sojourn up the east coast from Florida to the Alleghenies of Pennsylvania. Many of the campers we've seen have either dogs or cats. I'm sure we will meet many more pet owners before we again head for home. In retrospect, it makes the aggravation of the few inconsiderate campers seem almost trivial.  Well, at least until next weekend.

NEXT: On to Cowanesque and Tompkins Campground, at:
http://sleepstwo.blogspot.com/2012/08/tompkins-campground.html