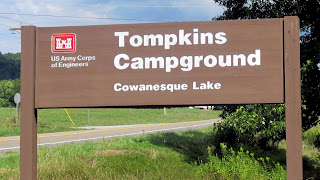 First impressions always count, good or bad. Driving up Bliss Road on the north side of Lake Cowanesque from Lawrenceville, right on the Pennsylvania/New York state line, gives us a strange, apprehensive feeling that has us wondering what to expect around the next curve. The drive is at first a narrow, overgrown two-lane road that opens up into a broader roadway, through rolling farmland but soon becomes a chassis-rattling ride that only my three-year old granddaughter would love. It's one of those semi-smooth roads where if you try to sing and hold a single note, you end up sounding like a broken record. The undulations in the road are subtle but constant, and prevent us from towing our travel trailer anywhere near the 45mph speed limit. We'll have scrambled eggs in the morning, I'm sure. But the first view of the beautiful lake and the campground more than makes up for the road.  The area itself is only twenty five or thirty miles south of Corning, New York.

We park next to the main gate, which has a drive-up service window, rare in the world of main gates, and within a few minutes are on our way toward site 66, our home for the next two weeks. We tried to swap sites for one of the full-hook up campsites which are only found on one loop of the campground, but there are no vacancies at any campsite over Labor Day.   We aren't on the full-hookup loop, of course, so in five or six days we'll have to unhook and head for the dump-station.

Bill and Joyce McCawley have been the hosts at Tompkins Campground for ten years. They are the only camp-hosts here, doing both the “A” and “B” contracts, so there is a good chance you've met them if you have ever checked in here. The young man who occasionally sits in for them is their son, who helps fill in during dental visits and other rare absences from their duties. One of those duties is the care and landscaping around the main entrance, which they pay for out of pocket. They do a beautiful job as the main gate at Tompkins is perhaps the prettiest we've seen on this trip.

The campsites are all paved, with grass alongside the paved pads. This is our favorite type of site. The pads look exactly like the ones at Robert W. Craig in West Virginia, except here they all have water. They all appear to be level, ours certainly is, and we are only twenty yards or so from the showers and the laundry. The sites are well spaced, clean, and have plenty of greenery between them for privacy. Great campground. The few sites that are actually on the lake front are also full-hookup sites, so we now know if we decide to return to this area which sites to reserve.

The closest WiFi is in the nearby town of Elkland, Pennsylvania, just five miles to the west of the campground. We drive over our first day here just to sight-see and log on if possible. The pretty little town, full of history and unique architecture, has a library that requires a signed certificate and a photo ID to prove our identity before we are given the sign-on password. We check e-mail, pay bills, make sure all our friends still like us on Facebook, then head back for a great pasta dinner.

We tank up in Pennsylvania before driving up to Corning our first Friday as gasoline prices are considerably cheaper in the Keystone State than in the Empire State. Way cheaper! We visit the Corning Museum of Glass, one of the major attractions in the area, before heading back to the campground via back roads, avoiding the congestion and construction of U.S. 15, the major route between Corning and Mansfield. The countryside is just beautiful. One odd note about the Corning Museum of Glass, though. When we wandered through the gift shop, which is extensive, covering most of the first floor, we picked up several blown glass items we wanted to buy as mementos. Oddly enough, they were all made in China. 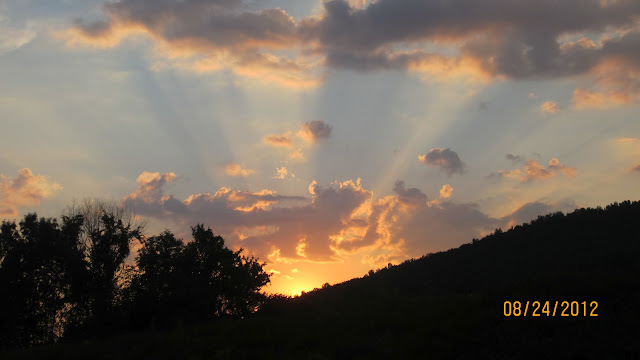 The campground is just about full as we pull back in, and the friendly waves and smiles from campers sitting around freshly lit bonfires are a welcome that we have found missing in several other campgrounds. We'll be here for awhile, so perhaps our opinion will be affected by exposure, but, again, first impressions still count, and our first impression here is just great.


NEXT: Reflections on Thompson Campground, at:
http://sleepstwo.blogspot.com/2012/08/reflections-on-tompkins.html