We took a quick tour through Fargo - population 321 - before turning around and heading out highway 177 to the Stephen Foster State Park. As we drove through the Slash Pine forest toward the main park gate on route 177, we were happy to see most of the forest recovering from the horrendous fires of 2011 although scars are everywhere. The several roadside ponds are once again filled with water lilies, but we're lucky today as the rains have held off. We are the only vehicle on the seventeen mile road and see only one camper in the state park as we pull in. It turns out to be the Class A camper belonging to the camp hosts. 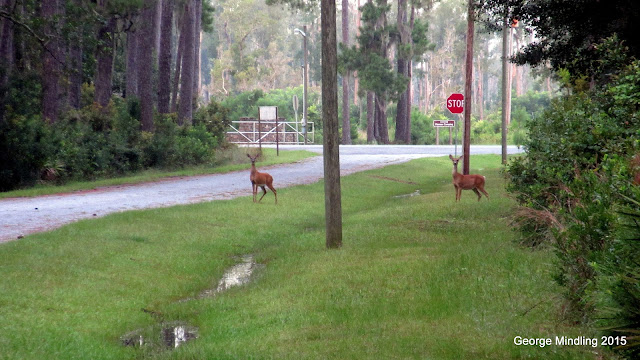 We check in with the ranger at the temporary trailer being used as a headquarters building and once again select a pull-through camping spot. Every rental boat at the nearby dock is tied up and all the canoes and kayaks are forlornly stacked along the edge of the access slough, waiting for renters who haven't arrived. The park is absolutely empty except for us. Early August is not a real popular time to visit the Georgia swamps, so this definitely isn't peak season. The weather has been ten degrees cooler than at home and quite enjoyable.

Several wild turkeys walk across the road in front of us, and white tail deer are everywhere. We set up easily on the grass camping site, only hooking up the electric power cable and the TV cable, putting down the landing gear just to keep the trailer from rocking while we walk around in it. We are the only campers in the whole park. 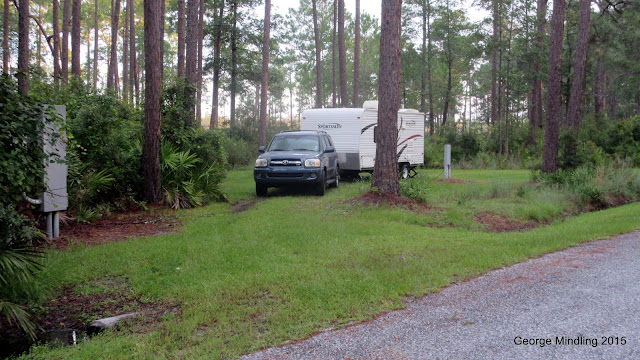 There is no cell phone coverage here, located at the headwaters of the Suwannee River. We'll have to wait until we head back to US 441, some seventeen miles away, to call the garage about the indicator lights on the Sequoia, but for now we just take it easy and make the best of the trip. At least all the campsites have a television cable feed with eleven analog television stations, but the reception is poor at best. The local weather is out of Jacksonville, Florida, but since we have no alternative, it is welcome news. Scattered rain is scheduled for tomorrow morning, so we plan on being at the office to rent a canoe at 8:00 am when they open. We'll even bring our 99 cent emergency, plastic ponchos that come in so handy when traveling light. 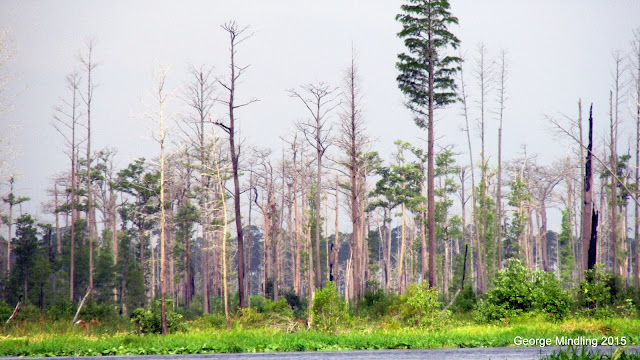 We met one of the camp hosts, Debbie, while walking Taz and had a pleasant discussion about the park and camping in general. Debbie and her partner are camp-hosting for the first time and have been here since June. It was their Class A camper we saw when we drove in. They'll head south after their contract is up the end of September to another campground. So far they are enjoying the experience. While we're chatting, a pick-up camper drives in, so now we have two campers in the whole, meticulously mowed campground.

Day breaks overcast, but dry, and after breakfast and walking Taz, Ilse and I walk to the office next to the boat basin and rent an aluminum canoe. We aren't prepared to paddle for more than a couple of hours, so we rent one for two hours for fifteen dollars. Normally we would each rent a kayak, but we decided it would be easier to take photos if one of us could handle the boat while the other did the touristy stuff. 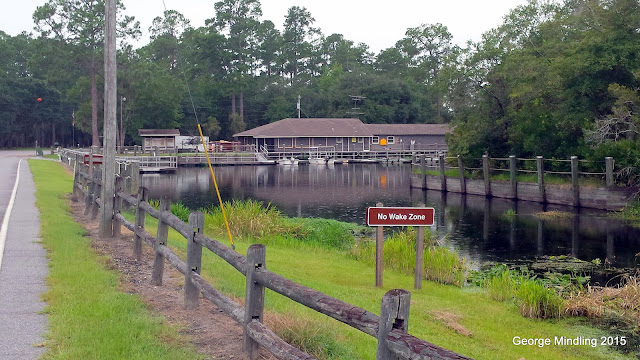 The only sound while we load the canoe is a pig frog bellowing across the slough from us. Many people think they are listening to alligators, but a gator has a distinct sound of its own. Besides, mating season is long over and rarely do they call out or make any noise whatsoever. They are usually creatures of stealth as most alligator bite victims sadly discover. 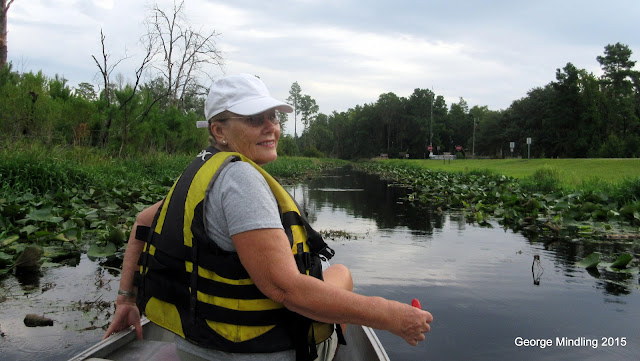 We cautiously paddle out the narrow access slough to the river, not knowing what to expect, and are pleasantly surprised to break out into the widest part of the river I've ever seen. Usually the width of the Suwannee River isn't very impressive, just a narrow, often sandy trickle of water that might be called a creek elsewhere. But here it is wide and looks like the river I always imagined. This section is called Billy's Lake and is over three miles long. 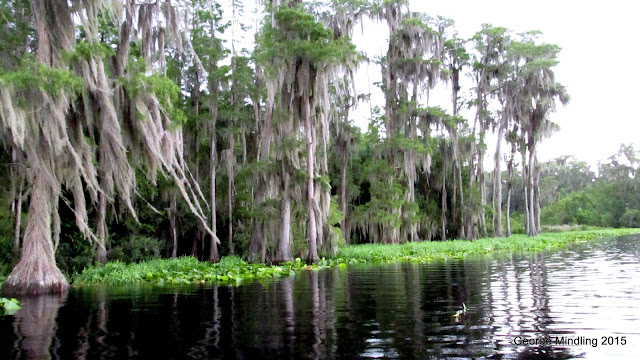 Perhaps because there have been no paddlers or boaters on the water, there are alligators everywhere. We are accustomed to paddling with the primitive creatures as they are common in the Myakka River where we live. We live on a waterway connected to the Myakka river, just a few miles downstream from the Myakka River State Park. We see gators behind the house every once in awhile, they aren't uncommon. The Myakka River State Park comes close to this density of alligators, but Billy's Lake, here at the headwaters of the Suwannee River, has to be the heaviest concentration we've seen yet. Nobody out but us and them. I take one photo with eight of them swimming in front of us, but only five are visible when I later check the photo. 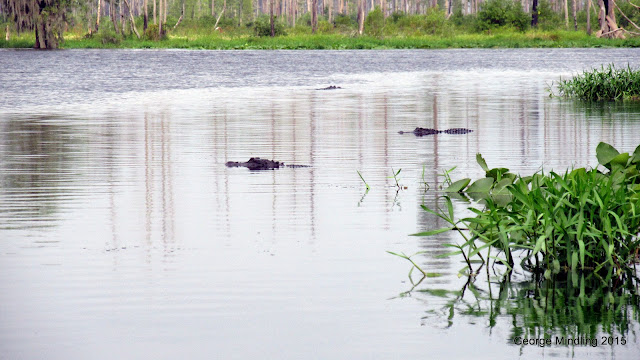 We get caught in a couple of quick rain showers but by the time we get the raincoats out, the rain stops and we dry out quickly. The forest fires did more damage downstream, so the Cypress trees and the forest are denser upstream. A very pretty stretch of river, and we'll plan a longer paddle for sometime in the future, but after an hour we turn around and head back. The weather is picking up and getting windier, time to pack it in. Time to break camp and head north.

For a quick video of the access canal to the park, take a look at the famous "gator frenzy" video, taken early one misty morning - https://www.youtube.com/watch?v=2CQ1N1mAi9s 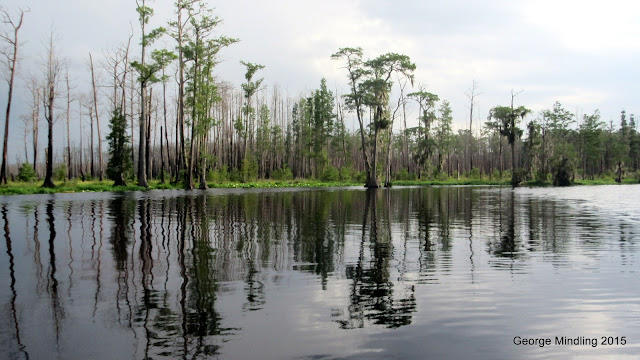 NEXT: Vogel State Park, at:
http://sleepstwo.blogspot.com/2015/08/higher-up-vogel-state-park.html