The Last Train to Clarksville

The image of stepping up into an old railway coach and through an imaginary portal into years gone by sells as many tickets for the Blue Ridge Scenic Railroad as does the allure of a scenic railroad trip through the north Georgia mountains. The popular heritage railroad runs as much on nostalgia as it does on sightseeing. It does not run on commerce, although local commerce has much to do with the success of the railroad as it has become an integral part of the tourist appeal of the area. The old rail service to the heart of the Copper Basin, back when the track was part of the Marietta and North Georgia line, has evolved into a specialized, smartly run opportunity for old-timers to tell their grandchildren what it was like in the old days. 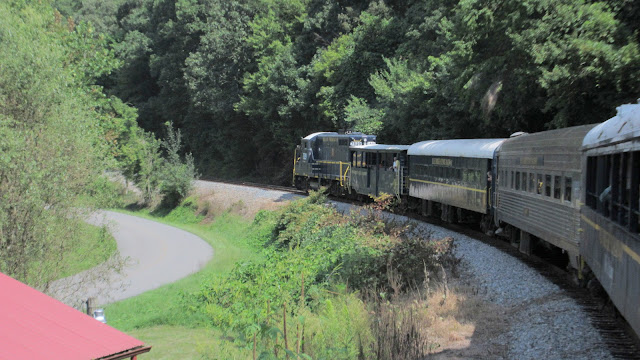 The trip begins at the depot in the heart of the smart, upscale tourist-oriented town of Blue Ridge, Georgia, and ends an hour or so later in a unique destination just twenty miles away on the Georgia/Tennessee state line. When the freshly painted blue and yellow, ten-car train finally and slowly screeches to a stop, it has its front half in Tennessee and the back half still in Georgia.

Passengers are treated to a very pretty ride along the Toccoa River as it runs north – yes, just like the St. Johns – into Tennessee where the name of the river changes to the Ocoee River. The town of McCaysville, Georgia/Copperhill, Tennessee, the destination of the nostalgia-induced journey, is where the train stops and passengers disembark for a two hour visit before the return trip to Blue Ridge. 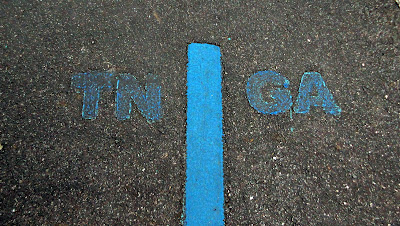 There is really only one town, delineated by a series of rectangular blue dashes painted on sidewalks and on the streets, and you may not be aware of which town you're in as you wander around looking for a restaurant or a souvenir to take to the friends back home. Many of the passengers from the train have their heads buried in the brochures handed out by local merchants who greeted them as they disembarked from

the train and don't see the fading painted marks on the sidewalks. I couldn't help but think of cruise ships that flood small, coastal communities from Jamaica to Alaska with sightseers and tourists, then depart with everyone back on board, leaving nothing behind but cash and credit card charges. Except here they depart by train. When it's full, as many as five hundred passengers shuffle back to the waiting train when they hear the warning horn. Don't miss the four blasts on the train's horn, the ten minute warning, or you take a taxi back to Blue Ridge.

The Toccoa River is not the wild and scenic river envisioned by tourists who rely on television or multimedia advertising for their understanding of the world outside of their daily lives, but it is a testament to what we can achieve when we want to. The upscale homes that dot the banks of the clear, light green-colored, steady flowing water aren't the rustic, Appalachian leftovers from the defunct copper mines that give the Toccoa River its distinct color. Visions of pioneer outposts soon give way to parked Mercedes sedans and four-wheel drive pickup trucks. This area has been discovered by realtors and summer residents as well. The river is very popular with tubers, kayakers and white water rafters as the 1996 Olympic whitewater sports competition events were held just a few miles downstream from Copperhill. This is also the trout fishing capital of Georgia.

One of the artifacts pointed out by the guides on the train as it slows to allow photographs is a Native American fish trap thought to be over 500 years old. The fish trap, created by carefully placing large stones and rocks to form a river-wide sluice that funnels the water flow to a central collection point, is directly in front of a newly built river-front home. The thought of tribes that preceded the Cherokees living and fishing where someone now parks their Lexus triggers my imagination and awe. I would have a hard time mowing the lawn here without thinking about what happened on the banks of the river so many centuries ago. The Toccoa River is still a beautiful river, and most property owners do much to keep it pristine or clean. It is a very pretty ride through a very unique part of Georgia.

The friendly BRSR staff asks everyone as they re-board the train which side they sat on during the trip down, – the trip may have been north, but you went downhill – then has them sit on the opposite side for the return trip to Blue Ridge. Everyone gets to see both sides of the excursion. The railroad even has a properly dressed conductor who walks through the train, chatting with everyone and punching tickets just like in years gone by. In reality, if you have a color-coded sticker with your assigned car number on your lapel your ticket has already been verified, but it is a nice touch for all the old-timers and dreamers who like to think they've taken a step backwards through time. While the whole journey takes four hours, the trip back lasts seems to last for only forty-five minutes or so, or is it just my interpretation of the return trip – they always seem shorter – and before we know it, we are back in Blue Ridge with plenty of time to stroll around and look at shops.


The train runs Fridays, Saturdays, Sundays, and sometimes Mondays, depending on the season, and is incredibly popular during the autumn months when the mountain foliage turns red and yellow. The train runs daily during the month of October, and twice daily during fall weekends. The Blue Ridge Scenic Railroad shuts down after the first of each year and but starts again each spring, so check their website at brscenic.com for schedules. Yes, we'll do it again next year. 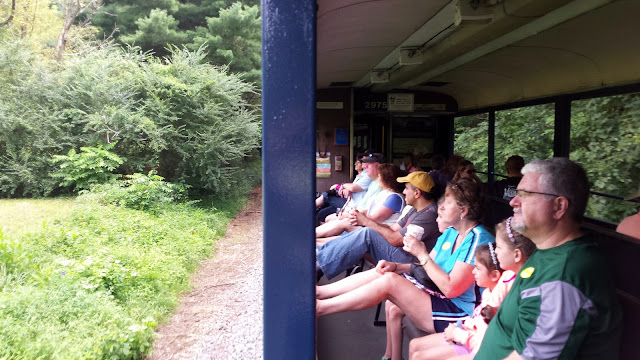 NEXT: Helen, Georgia - A closer look, at:
http://sleepstwo.blogspot.com/2015/09/authentic.html