Or, Can they cook it even if they can't spell It?


Helen, Georgia, the make-believe German town in the north Georgia mountains where three out of four “Bavarian” restaurants misspell Wienerschnitzel on their menus, suffered greatly when struck by a uniquely twenty-first century malady. After talking with several frustrated shop owners, we found that problem is all too common.

The fiber-optic communication trunk that carries the Internet for the whole community apparently goes down often enough to cause a communal groan. When the Internet provider goes on the blink, or rather goes dark, the whole town returns to the twentieth century, from cash registers to hotel reservations.

Restaurants place hand-scribbled signs in the door asking for patience, and cash, if possible. A few merchants scrounge up old-fashioned mechanical imprint machines to take credit cards, but many just shrug their shoulders and hope it doesn't take six days for service to be restored like it did not too long ago. Labor Day Weekend is only five days away. They have their fingers crossed.

We came in from the Richard Russell Scenic Highway on the north side of town, an absolutely beautiful stretch of twisty road that runs from near Brasstown Bald to just outside Helen. This is one road the British television program Top Gear should have driven instead of the Blue Ridge Parkway. The beautiful roads up here draw motorcycle riders by the thousands from as far away as Atlanta. We got to see one emergency airlifted from Vogel State Park after he crashed on one of the nearby popular highways. Now I know why the parking lot at the state park has a big white H with a circle around it painted in the center. It is apparently used quite often.

We drove into town just after the lunch hour “crush.” The Chattahoochee River that runs through Helen was almost void of tubers, you know, tourists floating lazily down river on flamboyantly colored inner tubes. We counted only six people in the river the entire time we were in town.

They really aren't inner tubes these day, they are only shaped like the old black, rubber tire inner tubes that stunk and left dirty black marks on your bottom. I had an old one with a red rubber patch on it that blew up like a piece of bubble gum after I jumped on it from a dock. The new ones are color coded so the tube-rental operators know who to pick up with which bus on the other side of town.

We crossed the bridge over the Chattahoochee River in the center of town and drove to the new, free City of Helen parking area to avoid the $5.00 fee charged near the tourist shops. Walking an extra block or two is a very European thing to do anyway. We were the only car in the free city lot when we parked and the only car there when we walked back two hours later.

We crossed the main street several times with no traffic in either direction. Visitors were sparse and mostly empty-handed. Summer is fast drawing to a close this last day in August, 2015, and it doesn't look like there is any pre-Labor Day rush. The merchants we talked to are painfully aware their peak season is almost over, and they certainly don't need the aggravation of lobotomized cash-registers to make matters worse.

We stopped and scanned menus posted outside several of the more prominent, European-named establishments, and decided if they can't spell the entree, there's a good chance they can't cook it either. Either that or the same company prints all the menus, and they don't know how to spell Wienerschnitzel.

We decided to eat at a river-side restaurant we'd visited years ago with our daughter and granddaughter. While we enjoyed the view and reminiscing about our past visit to the restaurant, we were once again disappointed by the poor quality of the very expensive food. Trust me, the German food is as authentic as the spelling is accurate. Bland, tasteless, even cold food can be labeled anyway they want, but it still tastes awful. They want top dollar for it as well, just to add insult to injury. The side dishes must all come out of the same forty-gallon containers. 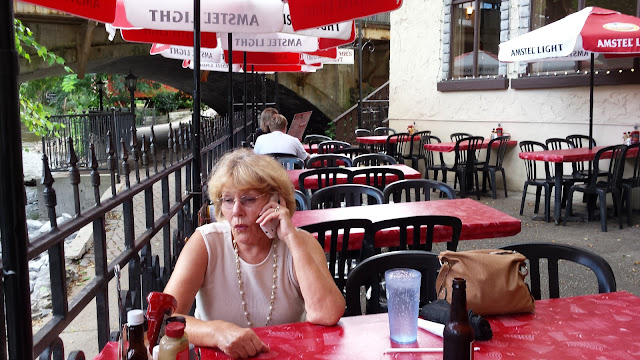 A popular grocery chain has a delicatessen in every store, and we have made them a regular stop on our Georgia mountain vacation because we don't like prepackaged, micro-waved, high cholesterol, sodium laden food we seem to get at every local restaurant we stop at. We have had our share of bad restaurant food during this trip, including a barbeque place in Hiawassee that should be red-flagged.

Unfortunately, we didn't find a  grocery store coming into Helen from the north, so if there is one nearby, we missed it. Too bad, we would have taken one of their custom-made subs down to an open spot on the riverbank and had a good lunch. Hmm, thoughts for next time.


NEXT: Timing is everything, at:
http://sleepstwo.blogspot.com/2015/09/thwarted.html