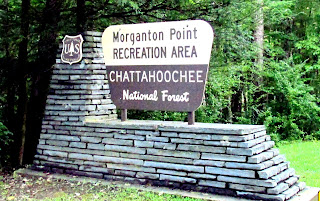 Located on the westernmost of the three Tennessee Valley Authority Lakes in Northern Georgia, Lake Blue Ridge, the Morganton Point campground was our first stop headed south from Lake Powhatan in Asheville. Run by the Cradle of Forestry in America Interpretive Association, the relatively unknown campground was different from what we expected in more ways than one.

I made the reservations three months prior to our trip, and using the online descriptions, picked a site that appeared to be close to the shower facilities and easy to back our twenty foot travel trailer into. Unfortunately, none of the waterfront sites were available for the whole week we were to be there so I went with what I thought was the best alternative. [Lakefront site 5 is the one we would pick now that we’ve seen the campground.] There are caution notes on several of the sites because of drop or rise of the camp sites from the access road, but the note and the photo of site 24 looked OK.

We originally wanted to head for Blairsville, Georgia, about thirty miles east, and stay at the nearby Vogel State Park, one of our favorites. Blairsville is in the center of the three TVA lakes, just south of Lake Nottely and about twenty five miles west of the famous Lake Chatuge which boasts the Florida refugee center of Hiawassee. Vogel has its own little, unassuming Lake Trahlyta, but it isn’t one of the major boating and water sports lakes in area unless you want to rent a paddle boat or a kayak. It does have a neat foot path around it, about a mile in length, that we walked every day with our dog.

Scheduling wasn’t on our side, however, as the fourteen day stay limit would have us leaving Vogel before the Labor Day Weekend, so we bumped our arrival at Vogel back by a week by adding a week beforehand at Morganton Point. We’ve spent time in the area around nearby Blue Ridge before and looked forward to a week exploring the area. We’ve ridden the Blue Ridge Train along the beautiful Toccoa river from Blue Ridge to McCaysville, but never seen the lake that feeds the river, Lake Blue Ridge. It would be great to actually camp by the lake.

The trip down from Asheville, only one hundred thirty miles away, was an easy, mainly downhill tow. Even the mildly twisty section through the pretty Nantahala gorge wasn’t difficult, even in a driving rain storm. Too bad we didn’t get to check out the recreation areas, but since the kayak and raft paddlers in the adjacent, fast-flowing river were in full wet-weather gear, we weren’t inclined to stop and take a closer look.

As with many Federal parks and campgrounds, you begin to question your GPS as you tow through narrow streets that appear to be in mainly residential neighborhoods blindly following instructions, when, viola, there’s the main gate. Same thing at a strange intersection on highway 60 known as the town of Morganton, which appears to have moved and not told anybody. The last right turn to the campground is a real indicator of narrow confines as the corner of the roof on the right hand building hangs in disrepair from being hit by turning vehicles. I assume most were either class “A” RV motor coaches or big fifth wheel trailers, but even my small twenty footer came awfully close to the splintered, dangling overhanging roof. Or the remains of it, anyway. 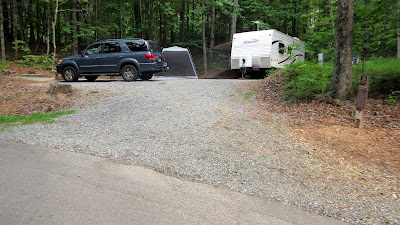 The entrance to the campground is another half-mile or so – after a left turn off of Lake Drive – and is another surprise; there is no gatehouse, just a stop sign and an afterthought speed-bump in the middle of the road. The residence of the Camp Host is on the right. Shades of when Ilse and I blew through a border crossing in Belgium back in our younger days. Was I supposed to stop there? At least this time I didn’t have to back up and beg forgiveness.

We chatted with Warren, the host, and got our paper work in order. Then he asked me if I’d like to change sites. That’s an ominous warning if I’ve ever heard one. We looked at site 24, it proved to be an uphill, back-in site that required an almost 45 degree turn at the top. A challenge to say the least. We decided to drive through the campground to see what else was available and promptly found ourselves squeezing past oncoming traffic on an access road that turns into a one-lane, bidirectional piece of poorly maintained asphalt without any warning. Luckily, it had a turnaround loop at the end allowing us to head back to our original site. We decided we liked the privacy and the nearness of the facilities of the original site and after two, tire spinning test tries, we took a running start – in reverse – and backed up the loose gravel incline, putting the trailer on the flat pad within feet of the water and electrical hookup monuments. We looked like we knew what we’re doing.

In less than an hour, we were unhooked and level, walking around the edge of the very pretty lake. As with all lakes in the southeast, water levels are dangerously low. I don’t know how many million or even billion gallons of water it will take to bring the reservoirs back to normal levels, or if it is even possible, but it is a sad sight to see. I can only imagine what these lakes will look like in ten or twenty years. Waterfront property will be a misnomer.

That, however, didn’t stop us from witnessing the most incredible sunset we have seen in years. We walked back to the camper, awed by the sunset, and looking forward to a week exploring the area.
George 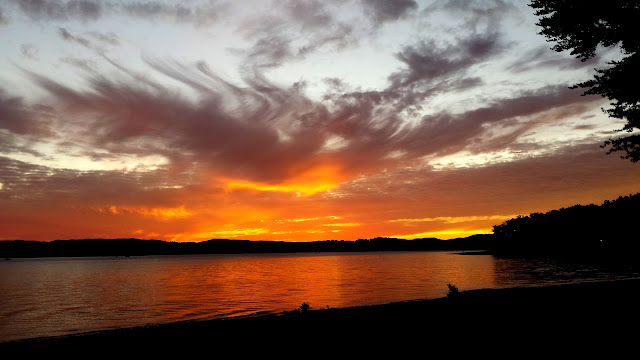