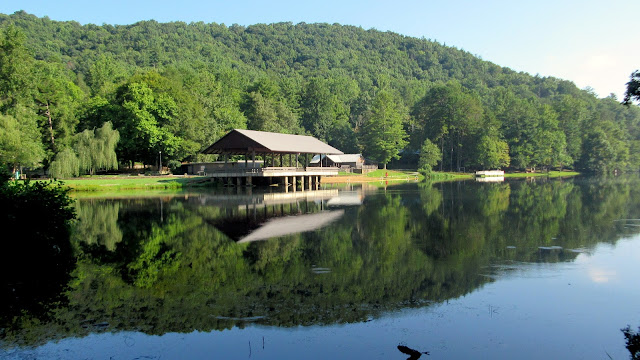 Vogel State Park is a nice, easy ride from nearby Morganton Point, the US Forestry Campground where we spent the last week. Blairsville has a new intersection to ease turning onto southbound US 129 headed toward Georgia’s flagship state park. It’s a nice eleven or so miles further until you make the right-hand turn into the park itself.

Luckily, the uphill side is two lanes wide at that point, so there is plenty of room to make the turn if no one is waiting at the stop sign trying to get out. Pulling back out of the park across the two lanes of traffic that appears at times to be rocket propelled is a different story. Famous Neels Gap is at the crest of Blood Mountain, you may have caught a glimpse of it the recent movie, A Walk in the Woods. It’s where many first-time Appalachian Trail hikers quit after the first day. 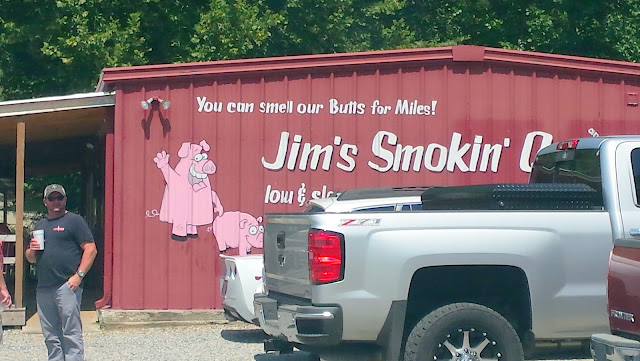 The low stone wall entrance is confining enough, and if two big camping rigs meet further down the two lane twisty sections of the access road, traffic stops while the two gingerly try to get past each other. That doesn’t deter little sedans from speeding blindly in to or out of the park, however. The narrow, curvy access road is in dire need of speed bumps. Once you are in the park, or shire, as Ilse calls it, it is a whole different world.

But things are not as they were. Or, more correctly, some things are exactly as they were. Recent repairs have been made to many of the tent and pop-up camping areas known as the red loop, but not to the main RV area. The camp site roads are still circa 1950, and the now decrepit toilet/shower facilities are from the same era. We saw mowers and edgers and clean-up crews constantly around the cabin area – there are 36 cabins available – the entire two weeks we were there. They’ve even added a second putt-putt golf course. Little attention seems to be paid to the camping area, however. With constant reservations pouring in for the RV camp sites, Georgia State Park Service seems to have little motivation to spend money for a product that sells itself. It is still one of the most relaxing settings we’ve camped at. We spent the next two weeks at Vogel, including the no-vacancy, three-day Labor Day Weekend. The park’s location is just 35 or so miles south of Murphy, North Carolina, and just a few miles from Brasstown Bald, Georgia’s highest mountain. 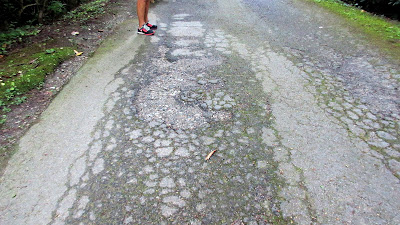 We discovered nearby Alexander’s, a unique department store out in the country, while trying to find where my devious GPS had taken us while searching for a landmark. I did a GPS map update before we started this trip, but this was the third time we were literally taken out to pasture by the GPS’s directions. I always keep maps for backup, such as when I have no cell phone coverage, but here a state road map simply isn’t detailed enough. There is no substitute like local knowledge: find someone local and have them Google your destination. In the digital world I’d stick a smiley face emoji here
.


The sales girls at Alexander’s went out of their way to sign into the Internet and look up our destination. They headed us in the right direction, but we first spent thirty minutes wandering around the two floors of clothing, furniture and outdoor sports gear. Curiosity overwhelmed me at the checkout counter as I stood behind an Asian woman who was buying two sets of snake gaiters. What, I asked, are snake gaiters?


“Oh,” she answered, “We wear these while we hunt for mushrooms. They are like chaps for your lower legs. Mushrooms are coming into season now, and when we hike the Appalachian Trail, we go off the side trails looking for mushrooms and we like to be protected from snakes.” She pulled out her smart phone and started scrolling through a massive photo index of mushrooms. All of the text on her screens were written in Chinese.

“Here,” she said, pointing to a detailed photo of a mushroom “This is what I found this week. It is called ‘Chicken of the Woods’ and very delicious.”

You just never know who you will meet when your GPS takes you to never-never land. 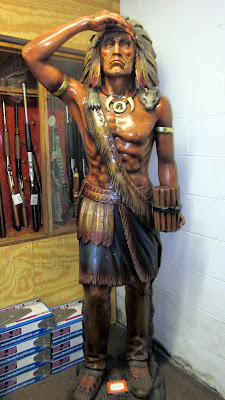 We bid adieu to Kawliga, the wooden indian who stands guard to the outdoor sports section, and Elvis, who serenades shoppers looking for furniture, and headed to Blairsville for the best Cuban meal I’ve had in years. Dan’s Cuban grill in Blairsville is run by expats from Miami, and the Palomillo steak, smothered in long, skinny French fries and grilled onions, brought back memories from years ago.

For the southern traditionalist, there is “Jim’s Smokin’ Q,” whose motto, “You can smell our butts for miles!” is a definite eye catcher. It’s only open on Thursdays, Fridays and Saturdays, and we lucked out when our neighbors, Hill and Maryanne from Cocoa Beach, asked us to join them for lunch. It’s right on the road from the park to Blairsville. Best barbeque I’ve had in a long, long time.

We were visited at our campsite by our daughter and granddaughter who drove up from Athens for a wonderful afternoon, and by the very couple who started us on this RV experience, Richard and Arlene. Richard and Arlene camped in an adjacent site for three days, giving us the chance to catch up on our families, ruin our diets, and solve the world’s political problems. 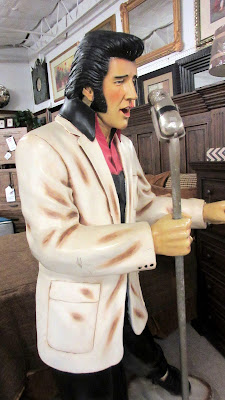 It was anticlimactic after everyone left, and we spent the last several days doing the laundry and just catching up on social media. There is spotty cellphone coverage at the campground, although there is free Wi-Fi everywhere near the cabins or the visitor center, We drove down to the visitor center daily the last few days just to catch up on e-mail and social media, which we found we didn’t miss as much as we did in Asheville where we had no in-park coverage of either cellphone or Wi-Fi.

We found the road noise from the nearby mountain highway to be an occasional distraction during the day, but weekends had us wondering if we had camped next to Road Atlanta by mistake. While we thoroughly enjoyed our two week stay this year, we looked forward to our next campground.