Another Storm - This time at Tioga

One reason we decided to leave Florida this summer was to escape the heat and humidity.  The other was to avoid storms.  On that one particular count, we aren't doing too well. 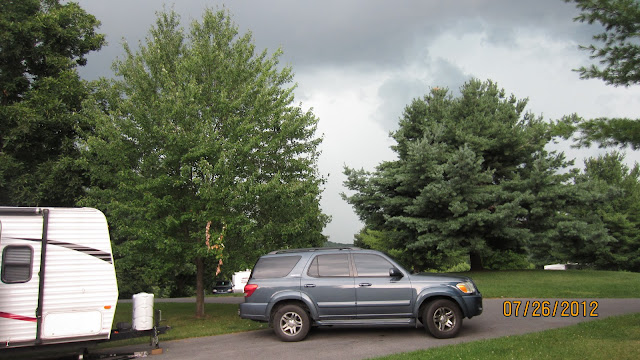 We had our first bad storm of the trip while at Goose Point, Virginia, when a frontal system that affected most of the eastern coast of the U.S. rolled through.  We did fine, although we were concerned about our rather precarious campsite.  The areas we traveled through for the next three weeks showed signs of tree damage and power line failures.  The damage was very wide spread.

On the day before we are to leave Ives Run, we get another severe weather warning, including a tornado warning. 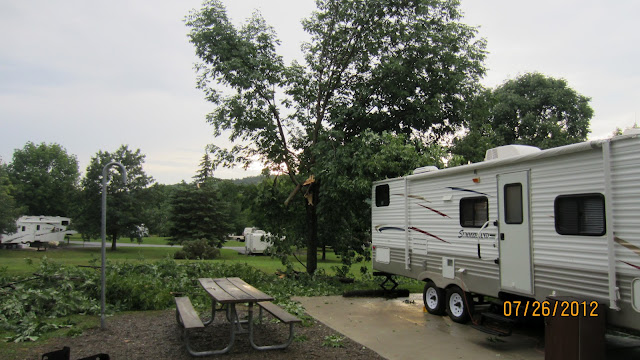 Again, we rocked and rolled in our little trailer, but we had no real problems.  We were tight and cozy after taking down the awning and putting away the lawn chairs.  The actual storm winds, while really severe, only lasted five minutes or so. Many people huddled in the toilet and shower facilities as the facilities are listed as storm shelters. We decided to stay with our dogs and ride out the storm. Next time, they'll go with us to the shelter. 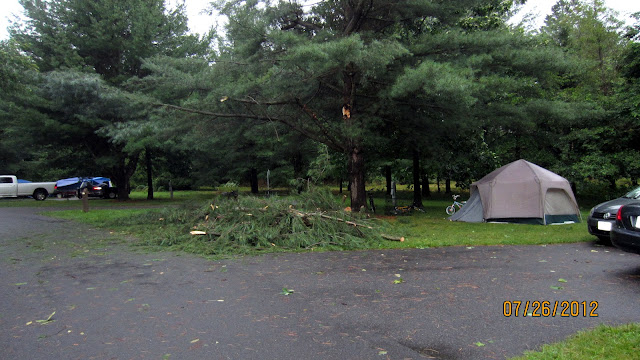 Several campers at the lower levels escaped damage by mere inches when several large tree branches fell beside their tents or RVs.

The sound of chain saws could be heard within half an hour of the storms passing as Park Rangers began clearing debris and downed tree limbs. The storm damage was wide spread along the northern half of the state and affected not only Tioga, but our next planned camping stop at Tionesta as well.

NEXT: On the road to Tionesta, or as everyone said, "Where?" at
http://sleepstwo.blogspot.com/2012/07/on-road-to-where.html