Time to Roll - The Flexibility of RVing


Goose Point is another campground often dominated on weekends and holidays by local users, most of them either camping in tents or small pop-up trailers. With clotheslines everywhere, extra vehicles jammed in every available nook and cranny, space was at a premium, and unfortunately, so was privacy. This large group has made meeting at the campground an annual family re-union ritual, this being the tenth year they have met at the same campsites. They will be here all week.

One couple arrived at the small, nineteen site loop sometime during the week with three Labrador Retrievers, and refused to leash their dogs. We decided to pull up stakes and leave Goose Point three days earlier than planned. We don't need another experience like the one we had several years ago at Lake Tobesofkee in Georgia. Besides, we can only take so much togetherness, so to speak.

The “A” Loop campground is simply too small to handle every site being occupied, especially when almost every site has guest vehicles. The lower “C” Loop is a little better. The middle level “B” Loop by comparison, is virtually empty the entire time we are there, and that includes the Fourth of July holiday. No electricity and only several centralized water spigots in the “B” Loop are the main reason the tent campers elect to pay for a full hook-up campsite in the other loops. They deprive the RVers who cannot access the “B” loop as it is designed for very small campers, not travel trailers or RVs. Another reason dry campers avoid the loop designed just for them is the toilet. The camper's facility isn't conveniently located like the toilet facilities on the two RV loops.

After talking with Harv and Lynne from Maryland, a couple camped on the other side of the “A” Loop, we head into Martinsville and use their public library for access to the Internet. Harv and Lynne also like camping at Corps of Engineer's Campgrounds and highly recommend the Robert W. Craig Campground, at Jennings Randolph Lake in West Virginia. They warn us about the mountainous roads to get in and out of the campground, but also tell us the campground is one they really like. Confident the Toyota Sequoia is up to the task of the mountain roads, we cancel the last three days at Goose Point and find a rare slot at Robert W. Craig for the three days. It is a 290 mile tow, a good days tow, especially in the mountains.

We are up early Friday, and quickly do all the pre-move chores in an eerily silent campground.  We carefully and slowly maneuver the trailer through the excruciatingly tight, down-hill left hand left turn we have to make to exit the “A” loop. Ilse walks alongside me with one of our little yellow Motorola radios and carefully monitors our clearances, especially the blind spot on the other side of the trailer. Almost as soon as we clear the left turn, we must make another hitch-crunching, right-hand turn, also down hill, to get to the dump-station at the bottom of the hill. The many multicolored paint samples left on the steel post for the gate hinge testifies to the sharpness of the turn.

We use the campground toilets as much as possible, but our holding tanks are both full and the dump-station stop is mandatory before we leave. I do not recommend the “A” loop for any trailers over 24 feet, although we saw several trailers there that were in the 32 foot range. I can only imagine how much fun they had getting out of there.

The largest unit we saw was a 37 foot long Class “A,” one of the self-contained diesel powered pusher RVs that couldn't make the turn to get out.  He simply could not negotiate the left turn. Another fellow camper and I had to block the access road and slowly guide the RV backwards down the tight hill. With only his TV camera to guide him, he was basically blind without us. He had no choice but to back down the road, and he couldn't do it alone. It took several minutes, and several tries before he finally backed down to the main camp road, and made the turn to the dump station. He didn't even thank us, he simply slammed his huge rig into gear and roared down the hill.

As we head toward Virginia Highway 57 on the five mile, super twisty access road, we decide to forgo our painstakingly selected scenic route through the foothills and go with what we know to be a quicker, painless route up US 220 to Roanoke. There we pick up Interstate 81 and head north toward our turnoff to the mountains at Harrisonburg.

We pass signs reminding us of the Civil War battles fought all along the valley. My great grandfather, Robert Stubblefield, was wounded and captured at Winchester, a little north of where we turn off the Interstate. I have never visited Winchester before, but we will be back through here in September and I make a note to stop on the way home. The famous Natural Bridge is another attraction we pass on the way up that I want to see on the way back. Many things still to do.

Finding US 33 is no problem, but following the ill-marked road signs through Harrisonburg leaves a lot to be desired. The road signs drop us in a residential neighborhood, and that's it. It has been a long, long time since any Virginia DOT people have followed their own road signs. This time our little GPS does the trick and guides us back to the highway and soon we are rolling west on the fairly smooth, two-lane highway toward the mountains. After we clear the often unsightly outskirts of town, the farms and countryside along the gently rolling hills begin to look more and more how I remembered traveling through the rural south with my parents when I was a child.

The ride through the George Washington National Forests remind us how beautiful our forests can be when not spoiled with the infestations of humans who do not care. The highway through the dense, dark forest is straight and several miles long, a very pretty ride. The forest road is in stark contrast to the ride through gently rolling farm lands and pastures that precedes it, and the drastic mountain climb that ends it. The end of the forest is as big a shock as any I have had towing a travel trailer.

The highway makes a sharp up-hill left turn and I find myself in the mountains! We are climbing steeply and sharply before I have time to blink. I haven't done 9% grades in a long, long time, and certainly not with the constant switchbacks that seem to have me looking at my own taillights! The Toyota shifts down and we grind our way for the next twenty minutes or so until we crest the top of the first mountain, a line of cars and SUV's strung out behind me. Then we get to check our trailer brakes as we immediately descend the other side of the mountain, also at 9%! I look at the warning signs for truck runaway ramps with great interest! Several of them show signs of recent use. 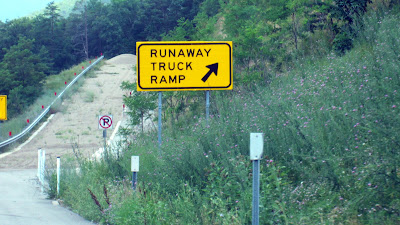 By the time we reach our turn to Jennings Randolph Lake several hours later, I feel like an old hand at this. My arms are tired, anyway. We make at least five climbs and descents before we eventually get to our new campsite at Robert W. Craig Campground, the last two unnecessarily.

I carefully keyed the coordinates of the campground from the Recreation.gov website into the GPS before we left Philpott. I made sure to use the coordinates of the campground and not those of the lake itself, so I was fairly confident my little electronic treasure would get it right. As we approach Elk Garden, a road sign shows WV 46 and the Jennings Randolph Lake veering slightly to the right. The sign is in front of a right hand curve, so, to double check if I slow down even further and check the GPS. There doesn't appear to be a highway turnoff after the curve, just an unmarked driveway to the right. The trusting GPS paints a solid purple line straight ahead, no turns, on the road we are on, so I start down yet another mountain into the small town of Fitzmiller, which we soon learn, is in Maryland. We grind our way up yet another small mountain on the other side of the small town located on the small, rocky stream known as the North Branch of the Potomac River, where our GPS soon dutifully tells us to follow a newly tarred gravel road to our destination. Time to stop and call the campground. Yep, we are on the wrong side of the lake. 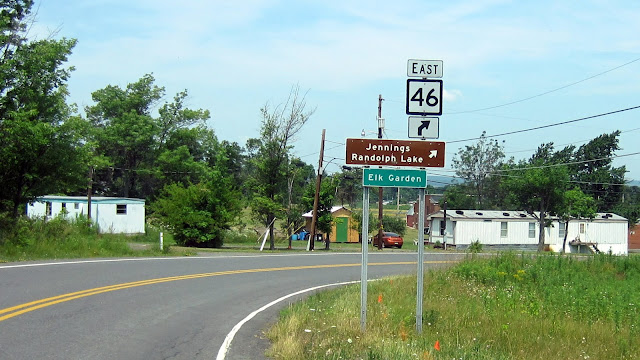 This time it isn't the fault of the GPS programmers. Nope, it is the website www.recreation.gov that posts the wrong GPS coordinates that take us over an hour, and about 25 mountainous miles, out of our way. Not to mention a freshly tarred road we didn't need to travel. Of course, me not correctly reading the road signs back in Elk Garden was also a mistake. I should have stopped then and called the campground. The coordinates posted on the reservation web site for the Randolph Jennings Lake Corps of Engineers Park are actually the coordinates for the observation lookout on the Maryland side of the huge project. The Robert W. Craig campground, where we have reservations, is of course on the other side of the lake.