Tionesta - On the Road to Where?

People at Tioga asked us where we were going next in our camping adventure, we answered Tionesta. They always said, “Where's that?” Funny thing is that they all from Pennsylvania, and to the best of our knowledge Tionesta is in Pennsylvania.  Doesn't sound good.

We made the reservations on-line over three months ago and actually lost campsites that we liked because we hesitated while comparing other locations. We were glad to get a campsite anywhere in northern Pennsylvania. Camping up here is a serious weekend pastime. Probably right up until football season. Cracking open a camping slot on a weekend in Pennsylvania during the summer is next to impossible. Besides, the campsite I got at the Corps of Engineers Tionesta Lake Recreation Area looks good on paper. It is supposed to be right on Tionesta creek, our first waterfront campsite of the trip. If you are going to make reservations for Pennsylvania, start early!


We strike camp at Tioga on Friday morning, July 27th and head west, hopefully, toward Tionesta. We go east, actually, because a fuel truck overturned on PA 287 west of the Tioga-Hammond Corps of Engineer campground and the Pennsylvania Department Of Transportation closed the road. The detour isn't marked, the road is simply closed! Pennsylvania highway 287 is simply barricaded at the intersection of an un-named county road!  You can go either left or right, so you make your best guess and go with it!  We chose left the first time while trying to get to the Grand Canyon.  We aren't even considering going the other way!


So, instead of subjecting our travel trailer to the torturous road over the river and through the woods, we elect to drive east instead to US 15, then south to PA 6 then finally head west, some twenty-five miles further than planned. It sounds like a great ride, though, as PA 6 is the state bicycle trail, and the highway is also a Pennsylvania scenic route. According to one local pamphlet, National Geographic even went so far as to write, "One of America's most scenic drives."

We turn on to PA 6 at Mansfield, and by the time we reach Wellsboro some twelve miles down the road, we decide whoever selected this road as scenic must have been sitting in the back seat watching a DVD. The road does turn somewhat prettier well past Wellsboro, and even then we find the ride up PA 287 from down south to be a far more scenic ride. At least there aren't any junk yards on 287. 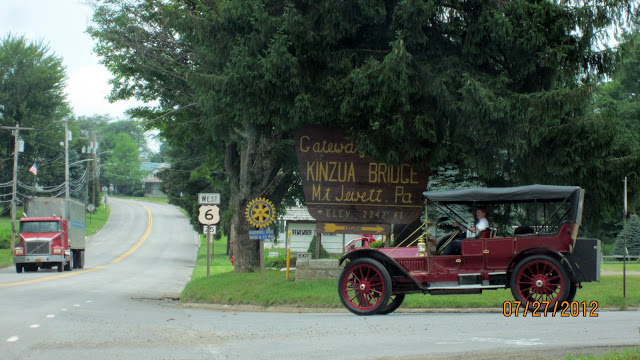 The damage from the thunderstorm that passed through the area the night before is evident as we drive west. Fallen trees and downed power lines are all along the highway. Several towns, including Port Allegheny and others in the area, are completely without power. Most traffic lights we come to in the small towns are out. The few gas stations we come across with power for their gas pumps have cars lined up reminiscent of the gas shortage lines of the early seventies. This is the second major storm we encounter this trip, the first being while we were at Goose Point campground at Philpott Lake in Virginia. We remind ourselves we left Florida to escape the heat and storms. At least it isn't hot.

As we slow for an intersection at Mt Jewett, an antique auto pulls out of a side road marked Kinzua Bridge State Park. Sounds good to us, so we take a side trip to a very unique Pennsylvania State Park that we hadn't planned to visit. 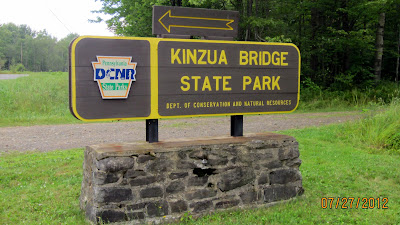 Built in 1882, the Kinzua Viaduct was highest railroad bridge in the world at the time. It was rebuilt in 1900 to modernize it, then finally removed from rail service and turned into a state park in 1970. Ironically, the center section of the viaduct was destroyed by an F-1 tornado in 2003 just as a major rebuilding effort was being undertaken. The partially restored viaduct was rebuilt as a sky-walk, complete with six large glass panels at the end that give a startling view to the valley floor below. It opened to the public in September, 2011. The damaged superstructure still lies scattered along the valley floor, testament to the ferocity of the tornado's winds. And as with all Pennsylvania State Parks, admission is free, as opposed to Florida State Parks which have an entrance fee for every venue. Incidentally, the Pennsylvania State Park System has been awarded the best State Park system in the United States. From the four parks we have visited this trip, we agree wholeheartedly.

As we rejoin highway 6, Ilse calls the campground at Tionesta to see if they sustained damage the night before. It would be nice to know if in fact they are closed before we get there. She gets their answering system, not a good sign. She leaves our telephone number and asks for a callback.

As we turn off PA 6 on to PA 66 at Kane, it begins to rain. It also is the beginning of a beautiful drive through the Allegheny National Forest. This is the road that should have the scenic designation, in my book. Soon, we approach our turnoff to Tionesta, just as the rain stops. Finally, a good sign. 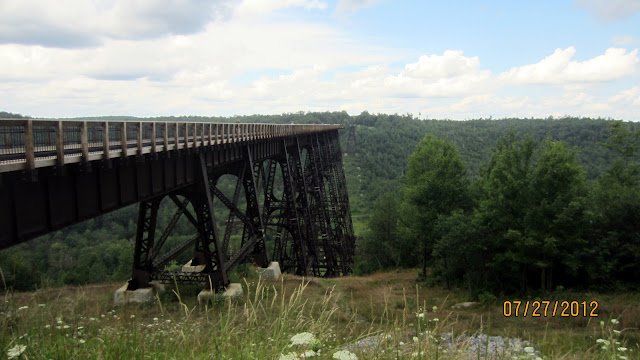 I almost over-shoot the gravel road turn-off to the Recreation Area as it isn't marked as all the others we've visited. It's toward the bottom of a long hill and looks more like a county park, which in fact, it is. Checking in at the main gate is a bit of a task as several people are patiently waiting for the Park Ranger to resolve reservation problems. They too, were hit hard by the storm. The reason we didn't get a callback was because they simply didn't have time. One complete loop, as well as the Corps project office, is without power. Luckily, our loop not only has power, it is a full hook-up site, meaning for the first time this trip we have a sewer hook-up. 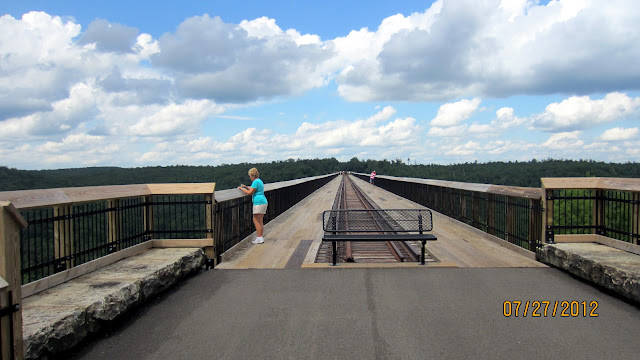 Our first impression is mixed. While beautifully forested and heavily wooded, the sites are far closer together than any Corps of Engineer park we have yet camped at, even at Goose Point.

We'll have to spend a couple of days to get a better feel for the Recreation Area, but for now, we are glad just to be dry and able to take a shower whenever we want without worrying about filling up the gray water tank. For the first time this trip, we have a full hook-up. That means we have sewer anytime we want to dump our holding tanks. Leaving the black water, the sewage tank, valve in the open position all the time is a sure-fire service call to have the tank cleaned and usually repaired.  Black water tanks should only be drained when at least a third full.  The gray water tank can be left open, but we leave ours shut as we don't want smells from the sewer coming back into the trailer.

The campground is below the dam, also a first for us, and will have to take a trip just to see the lake. Another unique Corps campground, and it really is in Tionesta. We drove over there tonight just to see if it is a real town. It must be, it has a library.

NEXT: On to Tionesta, at:
http://sleepstwo.blogspot.com/2012/08/tionesta-recreation-area-campground.html