Wake Up Call at Goose Point

We spend the first Friday, our fifth day at Goose Point Campground, doing unscheduled chores. We drive to nearby Collinsville to refill an empty propane tank in the morning, and later in the day we head to Bassett to catch up on Internet stuff. We still haven't spent a complete day just goofing off around the camper. We haven't even blown up the inflatable kayak we borrowed from our daughter yet.

Friday is our first really uncomfortable day as the temperature soar for the first time of our trip. We drive into town after a late lunch to use the Bassett Branch of Blue Ridge Regional Library's free Wi-Fi, but find they closed at 2:00pm. We drive a little further to a nearby McDonalds restaurant and use their free Wi-Fi to effortlessly log on instead. We want to upload photos from the family reunion and check e-mail. You know, the very stuff you go on vacation to get away from. We did catch up with the latest installment of the Danish television series, Borgen, a show we really like to watch. Glad it has subtitles, the restaurant is not great for sound from a laptop PC. But, on the other hand, try and sit there and not have an order of French fries. 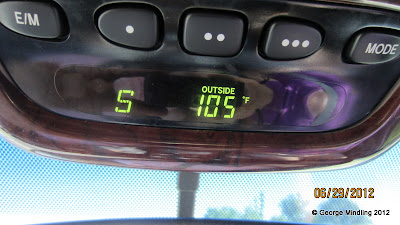 The heat hits us full blast when we walk out of the fast food restaurant. Not much humidity, but hot with a capital H. It is 105 degrees when we first open the SUV, but soon cools off to 103. We drive back to the campground where it is in the mid-nineties and have a great impromptu dinner of Ilse's special fried rice. We eat inside the camper as it is just too unbearable outside. We settle back for a quiet evening as the campground rapidly fills with weekend campers, mostly it seems from North Carolina.

Our solitude is lost, but we know come Sunday evening we will have the campground to ourselves once again. Serenity will once again fall on the southern Virginia forest. By the time evening falls, the once vacant campground is packed. Kids on bicycles everywhere. Typical for a weekend on a lake-front campground. Ilse and I retire to the trailer and kick back, relaxing while the neighbors next to us laboriously chop down a small tree for firewood.

After reading the first few chapters of her newly downloaded novel, Ilse idly turns on the television only to see storm warnings for all of western Virginia. A storm front that engulfs the entire Allegheny valley had suddenly developed and it is headed east at over 40 miles an hour! It appears we are going to be affected, it is just a matter of how much time we have to prepare for the predicted sustained winds of 50 mph, with gusts up to 80. I find out when I open the trailer door! Tree limbs and branches are already blowing across the darkened campsite. 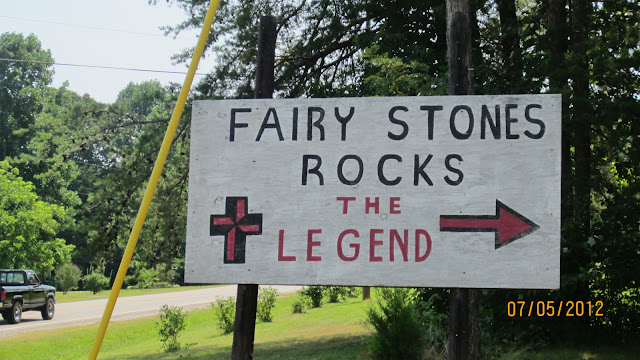 We quickly take off the string of camp lights that I attach to the awning frame and retract the awning. We put the folding chairs in the back of the Toyota, clean up as best we can in the yellow light of our camper's meager porch light. The blustery winds continue to pick up. We watch the helpless tent campers next to us who had just finished assembling their elaborate canvas fortress. We tell them what we know about the storm warning the same time the park attendant and drives up and asks if everyone is tied down. The next-door campers from Winston Salem are concerned, but decide to ride out whatever comes as it looks like we are only going to get the fringe of the storm.

The winds come suddenly and brutally. The trailer is solidly chocked and doesn't react to the wind as it is hitting us almost head-on. The thought of watching our trailer disappear over the edge of the steep hillside into the darkness crosses both our minds. We have already decided if tornado warnings are issued, we will take the dogs and head for the campground toilet. Since the trailer is solid and not buffeting in the wind, we decide to ride it out inside. I also decide to buy a heavy duty wheel lock to prevent the trailer from moving. I remember my problem with the plastic wheel chocks the first time we camped in Georgia where the travel actually rolled backwards a short distance. A short distance here would result in disaster.

After an hour or so, it begins to quieten down. We watch the local Roanoke television station which dedicates the rest of the evening's broadcast to coverage of the storm's damage. We experienced our first heavy winds and fared extremely well. Even the campers next to us kept from blowing away. All in all, a good night for everyone at the campground.

NEXT: On the other side of the lake: Salthouse campground at:
http://sleepstwo.blogspot.com/2012/07/salthouse-branch-campground-philpott.html