The Dark Side of Camping

When friends ask us about our experiences camping, they occasionally ask us what we consider the least favorable part of RVing, our civilized version of camping. You know, is there a part of RVing we really dislike? While I don't care for the constant semi-truck trailer traffic on the Interstate highways, or having three or four days of constant rain while confined to a muddy campground, or especially inconsiderate pet owners who don't leash or clean up after their dogs, there is one item we dislike that takes first place. The thing we dislike the most is a result of one of the activities made attractive by camping close to nature. Too close to nature as it turns out. Chiggers!

We have many camping friends who have never been bitten by chiggers. Many of my friends have never heard of them. In fact, the Germans don't even have a word for them. They call them “sandfloh,' or sand fleas, which they definitely are not. Chiggers are not even insects, they are arachnids, the same family as spiders and ticks. We have sand fleas in Florida – where we call them 'no-see-ums' – and they are quite mild by comparison to chiggers. In fact, they are almost pleasant next to the little, almost invisible, flesh-eaters that can spoil a vacation faster than bad weather.

My mom used to call them redbugs. They were a normal part of Blackberry picking on the family farm in North Carolina. You don't need to be a camper to have one of nature's worst biters chew up your ankle, all you have to do is walk in green, tall, wet grass where the adult mite, Trombicula alfreddugesi, has laid her eggs. Damp or wet grass happens to make a really great home for the little stinkers. It takes high humidity or moisture for the larvae, and they are normally found close to the ground, you know, foot level, or not much higher than your shins. That's where their normal hosts, rabbits, opossums, raccoons and just about anything else at ground level, run around. Unfortunately, green, tall, wet grass can be found on almost any overgrown hiking or bicycle trail. Especially the trails that encircle most campgrounds. Especially summer campgrounds. We've actually picked chiggers up in mowed fields.

Our pre-teen daughter called from a central Florida girls' summer camp one year and said we would have to pick her up early as the camp was being closed down early due to a severe measles outbreak. It seemed every child in the YMCA run camp had been infected with the disease and the camp medical staff had no choice but to send everyone home. We thought that was really odd as our daughter had the measles when she was in elementary school.

We met her several hours later at the pick-up point along with a bus filled with scratching, red blistered young girls and realized they weren't measles ridden at all, they were all covered with chigger bites. The medical staff at the summer camp had never seen a chigger bite and misdiagnosed the symptoms! They assumed they had a medical emergency on their hands! They did, but not the one they thought.

Chigger bites are not fun. The insidious bites don't peak in their horrible itching and pain for two or three days, and they take about two weeks to heal past the scabbing phase. Even then they leave blotches for another week or so. Scratching the bites once they have crusted simply starts another round of intense itching and the healing process starts all over. The bites are insidious because you don't have any idea you are being attacked while the little bugs, or buggers, depending on your viewpoint, are busy inflicting wounds you will regret for weeks to come. You can not feel them bite or even crawl up your skin as they look for a soft, easy place to attach themselves, so you have no idea they are there. You may be standing in a field of them being attacked by the hundreds and not feel a thing. Not for 8 to 12 hours anyway. And they seem to attack in bunches. That's because the adult lays 3 to 15 eggs in a cluster, usually under a leaf or a blade of grass, and if you brush against the leaf or blade of grass and pick up one chigger, you probably get them all.

Chiggers are almost invisible, being only 1/150th of an inch long, and oddly enough, in the larval stage, have six legs, making them look – under a microscope – like insects. The last two legs develop soon enough to expose the true nature of the little red beasts.

Chiggers are arachnids. In other words, they are in the same family as spiders and ticks. They are not flies or gnats. Technically they are Trombiculidae mite larvae, and in another of nature's quirks, once they develop into adults, they are harmless!
According to Wikipedia:

“After crawling onto their hosts, they inject digestive enzymes into the skin that break down skin cells. They do not actually "bite" but instead form a hole in the skin called a stylostome and chew up tiny parts of the inner skin, thus causing severe irritation and swelling.” 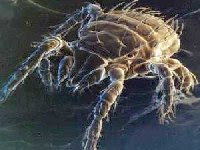 Sound like fun? The little stinkers don't actually bury themselves in your skin the way ticks do, and can easily be removed with soap and water, even a brushing with a towel or cloth can remove them before they settle in for dinner. If you give them a head start, however, you are in trouble. Going to bed without getting them off is a real treat as they then can wander over your whole body looking for tender parts. Believe me, they will find them. After they find a nice soft fold in your skin, like your groin or even your navel or a similar tender target, they drill a tiny hole in your skin and shoot you with a really ingenious chemical that causes another, really unique reaction from you, the human recipient.

The digestive enzyme they shoot you with is a meat tenderizer and no amount of clear nail polish will fix the wound. Being protected from the air may give topical, temporary relief, but in the long run nail polish is a remedy that doesn't offer much relief from a chigger bite. That's because your body builds a defense around the intruding enzyme that is destroying your tissue and actually encircles the attacked skin cells as a protective barrier. The result is a hard, crusted tunnel, filled with a digestible mixture the chigger then happily feeds on. After 2 or 3 days, the now satisfied larvae drops off and enters its next phase of life. You are no longer needed, but the feeding-tube reminder left in your body will drive you crazy for the next two weeks. That remaining stylostome and your body's reaction to the enzyme are the problems.

Hydrogen peroxide has been recommended as a topical agent, but again, the relief is only from the cooling liquid as the enzyme, or protein doesn't dissolve or react to the Hydrogen Peroxide. Even common bleach, such as Clorox, has been recommended as an agent to off-set the enzyme, and may actually be one agent that helps diminish the chemical reaction. I'll let you know by next week.

In the meantime, I use a commercial product called Chiggerex®. It has the anti-itching components recommended by all the “experts,” such as Benzocaine, Aloe Vera, Chamomile, and a label full of other chemicals. We find it offers the best relief for us. [This NOT an endorsement! Find your own cure and don't bother me about corrupting my amateur blogging status! On the other hand, if you find something that works for you, let me know.]
Some people prefer Ammonia based agents such as AfterBite®, or different types of Calamine lotion to get through the agonizing itching. The only thing we know that works for certain is time. Two weeks of it. If I ever quit scratching.

[Post Script: In researching the article on chiggers, it became obvious only several reference articles formed the basis for the hundreds of web pages containing information on chiggers. Much of that information was simply cut and widely pasted across the Internet. I eliminated untested or documented pages and “cures.” Apparently no ideal solution exists for relief of chigger bites. There are “home remedy” recommendations from fingernail polish, bleach, vinegar, petroleum jelly, even applying a salt wrap. There seems to be no single antidote to the chigger's enzyme, but plenty of mis-information about the animal and its bite. I therefore add the following statement:
“Because chigger wounds are a complex combination of enzymatic and the resulting mechanical damage, plus allergy and immune responses, plus possible secondary bacterial infection subject to local influences, no one remedy works equally well for most people.” -
My humble thanks to the University of Maryland, Iowa State University, and many other formal institutions for their published papers on chiggers. ] – George

NEXT: Habits and Routines, at:
http://sleepstwo.blogspot.com/2013/08/routine.html