Laundry Day - Housekeeping and Kicking Back

A few campers straggled in Monday, but not many. A great time to relax and do the housekeeping chores required when you’re on the road for an extended time. That means it’s time to wash clothes. The campground washing machines and dryers are available any time we want – there are a pair at both toilet/shower facilities on the West Rim Camping Loop – so it is a great time to do the mundane chores and enjoy the good weather. We’ll get back into tourist mode on Wednesday when we head for the 600 step staircase that heads down to the waterfalls in the valley below. Like my wife says, we’ll play that hike by ear. I think she’s secretly hoping for rain that will keep us in the camper. The West Rim Loop Trail we did two days ago was fun, but at times a bit tough for us flat-landers who only do this mountainous stuff once a year. Still, she was game enough to do that trail, and she’ll give it her best tomorrow, the scenic beauty is always worth the effort.

We did our best to be good tourists Monday by touring nearby downtown Chattanooga, which like any large U.S. American city is filled with contradictions. While driving through the manicured downtown Market Street, headed for the Tennessee Aquarium, we watched a pair of America’s social outcasts dumpster-diving right alongside a downtown intersection as we waited for a traffic light. I honestly wish political ideology would vanish in a cloud of humanistic concern for our country, but then again, what do I know. 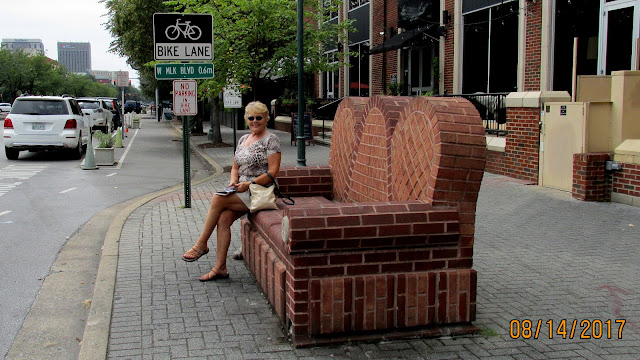 After road construction near the Aquarium trumps our GPS instructions, we end up on the Bluffs overlooking the Tennessee River, looking for a place to conveniently turn around. The Hunter Museum parking lot serves as a great place to recheck the maps and GPS, and as we pull through the parking loop, we stop to watch a pair of well fed ground hogs, which ignore us until I get out to take a photo. 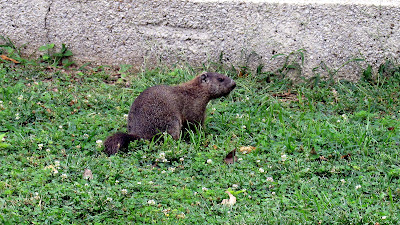 Chattanooga deserves admiration and praise from what we have seen, but they are fighting a tough battle, as is any large city. They have several really neat innovations including bicycles kiosks where participants can pick up or leave bicycles as they tour and traverse the downtown area. We parked in
one of many automated garages near the renovated Riverfront Area and walked to the Tennessee Aquarium across the street. We bought tickets for a Thursday tour on the Tennessee River Gorge Tour, also operated by the Aquarium. We walked around the Riverfront, then headed for a nearby Thai Restaurant with some reservations about what to expect. No need for concern, the Pad Thai was among the best I’ve ever had – sorry Royal Orchid – and by looking at Ilse’s clean plate, I don’t think she had any problem with her meal either. 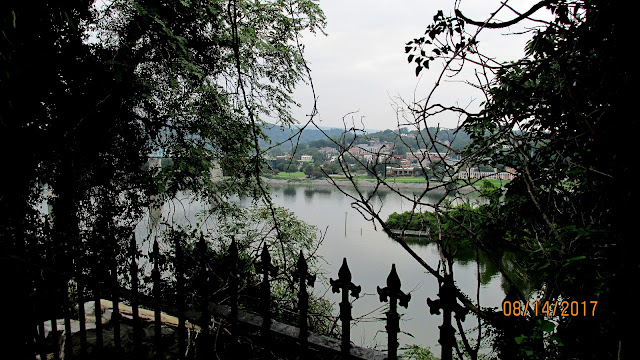 We had an exit gate at the parking garage that wouldn’t process my paid-up ticket, and luckily I had no one behind me as I backed up the garage exit ramp and switched gates. I did draw strange stares from a worker who appeared from nowhere carrying a Styrofoam doggie box, obviously leftovers from his recent lunch, but since he seemed dumbfounded by my explanation, we just waved once the gate opened and just drove out. 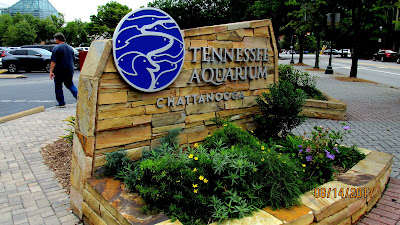 We struggled with my GPS to find the Tennessee Valley Railroad Museum, which was closed, then shopped at a grocery store on the east side of town that was getting a serious construction face-lift. Off course it poured rain as we left the store in the chaos of the construction, when else would it rain?

Heading back out to the Interstate for the short, wet trip back to the campground was a grim reminder of why I don’t like big cities where three Interstate Highways intersect, especially when they have lane-changing construction that narrows three lanes down to about six feet wide each. Bumper to bumper traffic with eighteen wheelers trying to get to their destinations on schedule makes for interesting driving. The rain got heavier and traffic finally got lighter and a little more cautious. We were soon at the Trenton exit and only seven miles from the campground with a huge, tailgating pickup truck that was so close it looked like I may have been towing him, right on my bumper. As we climbed the newly-paved highway through the clouds into another realm, the old expression, so near but yet so far came to mind. I can see why this park is so popular. Soon, we had the road and the mist-filled world all to ourselves. 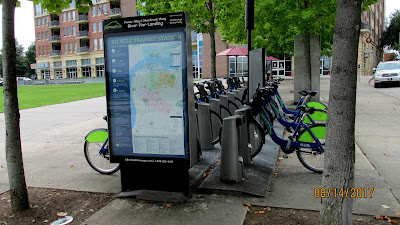 By the time we finish the laundry Tuesday afternoon, many of the sites empty campsites are filled, with at least three aluminum Airstreams. Pop-up campers and small towables are quietly tucked away in many of the wide camp sites, along with a scattering of tents and one new one for us: a tent mounted on a platform on top of a car carrier, aluminum access ladder and all. The little Subaru sedan seems to be bearing the additional weight well. Only one of the big Class A motorhomes and one of the extra-large fifth wheel trailers in the park. Everyone seems to be keeping to themselves as the park is as quiet as it was when we took the laundry bag to the laundry room. 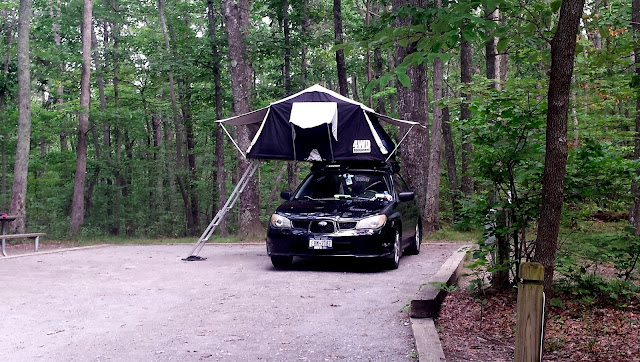 We know all the campground hosts by name now, and we chat with them whenever we meet on the camp road. One campground host just signed in, traveling from Malmstrom Air Force Base in Montana and he’ll be here until February. Another couple will pack up at the end of August and head for their next hosting gig in New Mexico. An interesting life style, but it isn’t for us. We toyed with the idea of being camp hosts, but we just aren’t ready to cut the umbilical cord, so to speak. We’d rather head for home when the summer heat breaks and sleep in a familiar homestead. Friends and our familiar surroundings in southwest Florida make a comfortable winter home base. I guess that makes us snow-birds of sorts, but since we never see snow, I don’t know if that is completely accurate. We’ll keep rolling with our travel trailer as long as we still enjoy RVing, escaping to the Appalachian Mountains to avoid the summer Florida heat and humidity. And, of course, doing our laundry when the campgrounds are empty.

Next - The Waterfalls Trail at CCSP, at:
http://sleepstwo.blogspot.com/2017/08/the-falls-trail.html