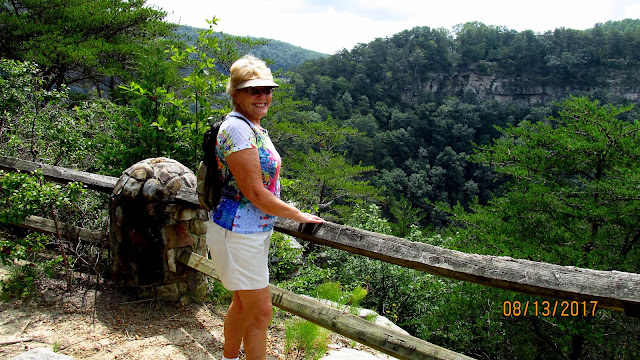 After a week of short hikes and walks, we decided to try the full West Rim Loop Trail at the Cloudland Canyon State Park to view the vistas we had seen from the easy-access, other side of the park. We were camped just a few hundred yards from the wide path that led to the rim trail and if push came to shove, and we felt we were over our heads, we could exit the rim trail at several points and walk back to the campground on the paved road that crosses the loop near the western-most top of the mountain. 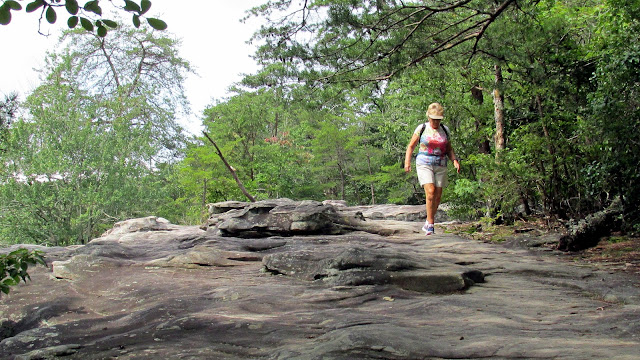 We did a leisurely Sunday morning breakfast and watched the huge tent city consume itself and disappear into a myriad of car trunks. By ten o’clock, we were ready to hit the trail, and except for one remaining tent, the one with the snarling dog that stood between us and the trailhead, the campground was empty.

“Great!” we thought, “We’ll have the trails to mostly to ourselves.” Compared to the number of hikers we met on the trail Saturday, we were almost correct.

We locked up the camper and took the long way around our aggressive neighbor and started down the quiet, shaded access path in a beautiful, cloudless day and mild temperatures. We had a taste of the west rim overlooks from the other side of the park when we first arrived. People on the west side of the canyon waved at us as we stood a few feet from the main parking lot, and of course, we waved back, thinking “Gee, what does it look like from where they are?” Today would be a great day to find out. 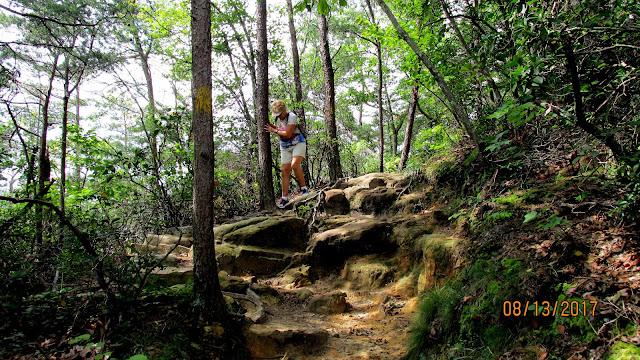 We began meeting other hikers as soon as we started the trail, including two couples hiking together – one of the young men precariously carrying a baby on his shoulder – and a young girl who ran past us like a rabbit. We also met several young couples with dogs, all on leashes. As we manipulated the often narrow path along the top of the canyon, we became adept at passing techniques with the dogs. One girl even pulled a traditional dog waterdish from somewhere in her backpack to give her young, four month old puppy a drink. We showed her our combination doggie bottle/waterdish we carry in our back pack and I think she may have actually been somewhat interested in something us old folks had to say. Well, maybe. 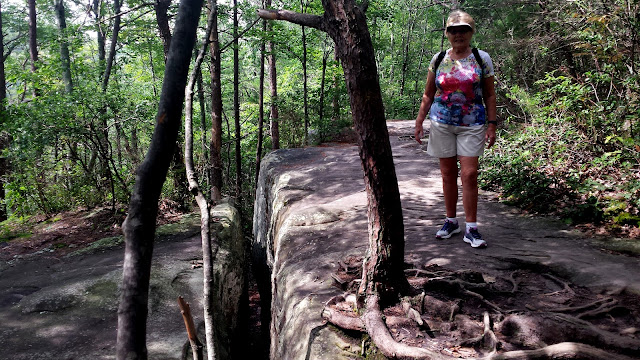 Several couples had young puppies, and just like our thirteen year old dog, Taz, too worn out and tired to be aggressive. The temperature stayed in the mid eighties, but we were sweating as if we were at home in Florida’s southwest coast. The dogs obviously felt the same.

Parts of the West Rim Trail have been “re-pathed” - their wording, not mine – and we found several markers to be misleading, or just plain meaningless. One marker had crude arrows scratched into it with car keys or knives, or something sharp, to add directions inadvertently or thoughtlessly left off the marker. You can’t wander meaninglessly forever as you either cross the paved road or you fall off the cliff, but it is an afternoon saver if you know where on the trail you are. Still, the West Rim trail, marked as moderate/strenuous, is visually rewarding with several great lookouts, and a few interesting caves, along the root and rock strewn trail. 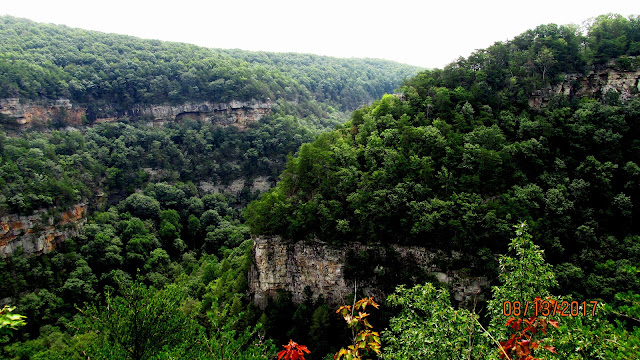 We headed back from the scenic overlooks at the end of the canyon and decided to head for the walk-in campground via another supposedly marked trail. We stood at one unmarked junction and stared at two identical flashes, the markers nailed to trees to mark a trail, that marked two divergent trails, one to the left and one to the right. As we stood trying to decide which path looked more worn, two women appeared from our right.

“Oh, you aren’t far from the walk-in campground,” one said as she brushed past, her chihuahua pulling on a leash, “Just keep going, it’s just up the hill.” 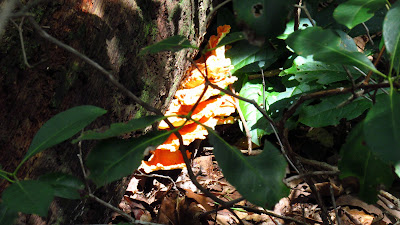 By the time we were back at our RV camping loop, by way of the paved access road, we were both drenched in sweat. We stripped, threw our clothes into the laundry bag, grabbed towels, flip flops, quick covers and headed for the empty, spotlessly clean showers. Even our pain-in-the-neck neighbor dog was gone. We shower not just because we get sweaty, but to also avoid the curse of trail hiking: chiggers! If you don’t shower and isolate your clothing, you may remember your hike long after the thrill of the scenery is gone.