Cheerful throngs of smiling, happy children rush from beneath the multi-colored fabrics that cover every possible campsite to greet Taz as Ilse takes him for his morning walk through the misty, damp campground.

“Please, Come back, we have more children who want to pet him!” one of the young boys wails.

“We’ll come back this way,” my wife answers, smiling at the crowd of children. 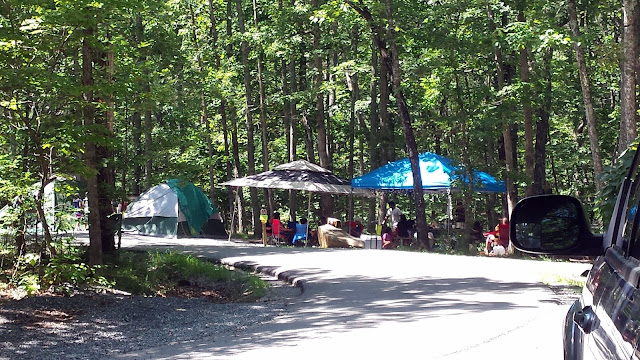 If you were expecting my typical pragmatic – some call it jaundiced – viewpoint, you’re probably wondering what Ilse slipped into my morning coffee. It’s hard not to put a smiley face emoji on the morning’s event since most of the throngs came well after dark, and even though we finally turned on the air-conditioner so we could close the blinds to shut out the parade of the new, high intensity LED camping lights, they did not make a sound. Amazingly, the campsites around us all filled with tents that weren’t there when we turned in for the night. Just as amazingly, it is as quiet this morning as it has been all week when the campground was empty.

Overall, the campground is barely half-full, a surprise as the park rangers were preparing for a full campground over the weekend. The weather forecast, coupled with the first week of school, probably dampened many plans. One large group spread across five campsites has seven tents and several huge fabric shelters arranged to create a “social center” set up adjacent to our young neighbors. While they were quiet setting up at night, the excitement of the weekend has become a constant reminder that no one knows what to expect during a weekend.

The tent next to us was put up by a young woman and her male companion who appears to have never slept outside before. He basically stands back and watches as she competently and efficiently erects the tent, cuts and heat-seals nylon rope, and covers everything with a blue camping tarp. They also have late night activity as they are joined by friends long after we’ve gone to bed, who also put up a tent. They did it quietly as well. We’ve been in campgrounds where three ring circus late arrivals had everything except a steam calliope, so we are actually pleasantly surprised by the civility of the weekend campers.

Ilse remarked that most of the campers were either tent campers or smaller pop-up campers. There are only a handful of medium size travel trailers or self-contained Class C’s, and only one large Class A motor coach in the campground. Many of the license plates seem to be from the Atlanta area. The large pull-through campsites with 50 amp electrical service are all empty. All of the registration cards posted at each campsite show none of them staying beyond next Monday. We will have the campground all to ourselves once again. All in all, the campground is far less hectic this weekend than we anticipated. 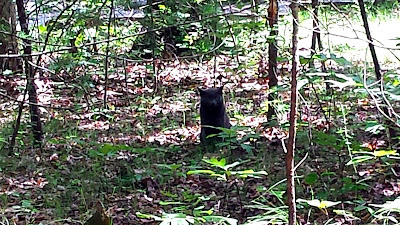 We've occasionally seen three feral cats that wander across the campsite during the quiet weekdays when the entire campground is mostly empty. There may be more, but we have identified three cats by their distinctive colors. One of them sat and stared after being called, but soon scooted for the cover of the underbrush. I doubt we’ll see them for the next several days. 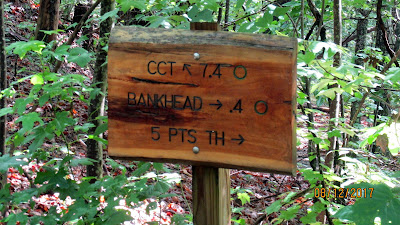 The weather forecast of rain doesn’t seem to bother the weekend campers who gather at the trailheads on the east rim. We decided to test the capricious gods of weather and drove the eight miles out of the Main Gate to the Five Points Recreation Area on nearby highway 157 to hike one of the many trails that converge on the old, overgrown mining site. The only remnants of the old mine are circular terraces, discretely hidden by nature as the forest has reclaimed the entire site. After a half-mile walk through the heavily wooded area, we decided the trails here are better suited to mountain bikers, and sure enough, we soon met riders converging on the main trail intersection trying to decide which trail to take next. Another fellow with his ten or eleven year old daughter peddled up an adjacent trail from the parking area as Ilse and I headed back to the car. Nice, but not as visually rewarding as the West Rim Loop Trail, which we can access from not fifty feet from our camp site. So, we head back to the camper and decide to see just how busy the trails at the main park are on this weekend.

We start down our connecting path after first avoiding a nasty, snarling dog somebody must love, tied to a tree near a campsite adjacent to the trail , and decided we’ll go as far as we are comfortable and return when the thigh muscles say “enough!”

After meeting group after group on the trail, all friendly, even one with a German Shepard wearing saddle-bags to carry its own refreshments, we decide to let the weekend visitors enjoy their hike without interference from us. We’ll come back early Monday morning when everything slowly reverts to normal. We’re ready for the waterfall trail, just not with this many spectators.

Next - The West Rim Trail at CCSP, at:
http://sleepstwo.blogspot.com/2017/08/the-west-rim-trail.html