The Interstate: On to Carters Lake 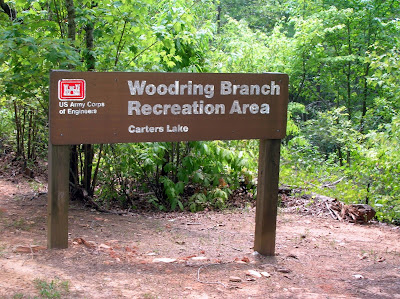 Never again will I tow a travel-trailer through Atlanta on I-75, no matter what time of day or night, or day of the week. From drivers using their left arms to hold their door shut on their old, banged up pickup trucks erratically towing dilapidated flat-bed trailers, to the eighteen-wheelers racing speeding Lexus's or BMW's, make the experience unnerving. The truckers seemed to take a break from the mundane delight of hounding poor, terrified drivers in the slow lane and attempted to show the unencumbered urban speeders that they can drive just as fast as any nimble sporty car. Just because they were towing a 53-foot long swaying, often ill-tracking trailer, Interstate racing through downtown Atlanta was a challenge many truckers just couldn't seem to resist.

If you don’t know what urban terror is, try driving in the right lane of the twisty, narrow multi-lane Interstate through the urban canyons with two kayaks strapped on top of your SUV, two bicycles on a tail-gate rack and towing a camping trailer in close-packed traffic moving at 65 miles an hour, and watch drivers fly down the entrance ramps without the slightest concern for merging into traffic. They stare straight ahead and simply try to drive into the passenger door of your car! I have ABS brakes on my tow vehicle so I never locked up the Jimmy’s brakes, but I’m sure I flat-spotted the tires on the trailer during the several panic stops I had to make to avoid collisions from traffic merging from entrance ramps. I was glad I had installed both trailer load-equalizers and an anti-sway bar before the trip.

When we finally pulled off of I-75 onto the two lane highway that would take us up into the Georgia mountains to our camp ground, we both sighed audibly with relief. As we finally let our shoulders regain their natural shape and unclenched our fists, both our dogs finally collapsed in the back seat as if to say, “now we can relax, too!”

What makes it all worthwhile happened twelve hours later, after I washed the day-glow pink paint ball splat off the driver's side of the camping trailer. We saw a full grown black bear swimming near the shore in Carter Lake, not 500 yards from our camp site. We were camping at the Woodring Branch Campground at Carter Lake, part of the marvelous U.S. Army Corps of Engineering recreational facilities that surround the lake. We were less than 60 miles, yet a complete world, away from downtown Atlanta.


We watched as the bear climbed out of the water across the cove from us, fumbled around the lake bank for a few moments, then quickly disappeared up into the woods.

It takes a full day for me to finally relax, unwind and realize I am in the wonderful, different world of camping. We decided we'll just find a different way to get here! It won't be on the Interstate!

Next: Carters Lake US Army Corps of Engineers Woodring Campground at:
http://sleepstwo.blogspot.com/2010/09/observations-camped-in-georgia_02.html