Miami must be like Paris: Nobody home in August. I don't know where the Parisians go, but the Miamians all seem to go to the Georgia mountains! We met most of them, well, many of them at any rate, at Amicalola Falls State Park in northern Georgia. The first RVers to join us at our nearly empty hill-top camp site were Sal and Yvonne, Miami expatriates who now reside near Tallahassee. They both graduated from my old high school, Southwest Miami, albeit many years later than I, but it was still a unique coincidence. One of the really neat aspects of camping is meeting interesting people. 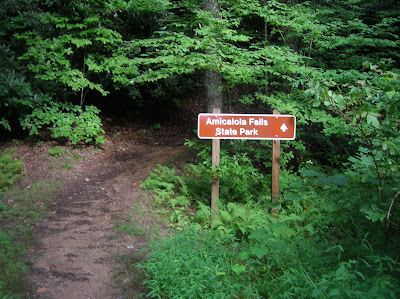 This was our first trip to the highly-touted Georgia State Park not far from Dawsonville. The access road to the lodge and the campgrounds located the top of the falls is famous for its steep, radiator-busting 25 percent grade. The lodge offers regular hotel rooms, convention facilities, and wireless Internet, as well as an excellent restaurant.

If you are a hermit, may I suggest tent camping on the wilderness trails where no one will find you, - the famed Applachian Trail begins not far from here - or the individual lodges where you can barricade the doors, even in broad daylight. Otherwise, be prepared for people who stop and talk to you about everything from your camper, your tow vehicle, or even just chat about your dogs.

The Amicalola falls themselves are renowned as the highest cascading waterfalls east of the Mississippi River. However, after looking at the small creek with its staggered, man-made impediments at the very top of the park, I was less than impressed. My wife and I had investigated the trickling flow of water leading to the falls overlook on the day we arrived, and wondered if this was all there was to the waterfall. The road to the lodge inconspicuously crosses over the small creek above the falls by way of an unseen culvert. As we walked down the steps on the west wall below the top of the falls overlook, we stopped often to look at the cascading water. We weren't able to get a good view because of the dense foliage. Still, as we descended further down the terraced walkway, we wondered if it was worth the trouble to go all the way to the bottom as we simply couldn't see anything but small, tumbling falls.

It was well worth the effort. At the bottom of the 425 step staircase is a paved path that leads to a catwalk that crosses the creek. There you can look up the falls to see a beautiful natural cascade that is, in my case anyway, unexpected. 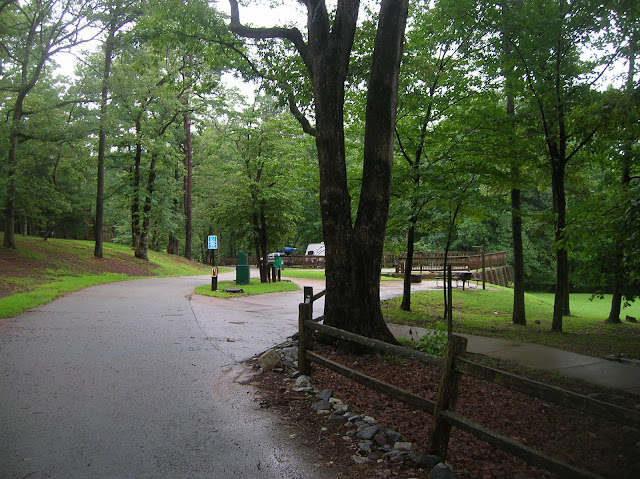 Our walk down the winding, multi-terraced staircase had been interrupted by the arrival of no less than eight responders to a young woman who was not physically able to complete the climb back to the top of the overlook. The first to scramble past us on the narrow staircase in hurried descent were two Georgia State Park rangers, followed soon by two more carrying assorted bags of emergency medical supplies. Two more teams of county emergency medical responders also hurried down the narrow staircase, carrying heavy bags of assorted equipment to the young woman who was by now sitting on one of the many rest benches found on the staircase.

Seemingly recovered, at least partially, the woman was accompanied down the trail to a path far below where she was met by a waiting utility ATV-type vehicle that took her out of the waterfall area. I talked with one EMT responder as he packed away his gear. He said they respond at least once a month to such an emergency on the staircase, but so far, had not had a single cardiac event.

They had to carry their gear back out the hard way, up the staircase to the top. Thankfully, they are in great shape. 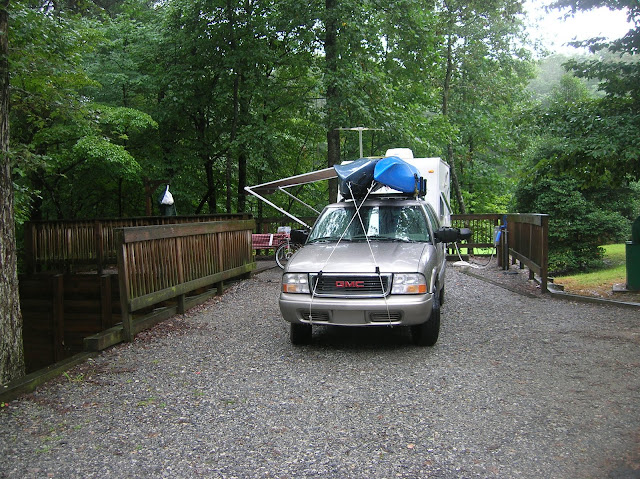 After drinking two bottles of water, we climbed leisurely back to the top where we met Alberto, Antonio, Elizabeth and Maria in the upper parking lot. I simply stopped to talk to the owners of a Chevy van that caught my eye and found out they, too, were from Miami.

As we drove back to the hill-top campsite, we decided to take a detour. A white, nondescript sign mounted just past the rental lodges said, "High Shoals Baptist Church" was an invitation to go take a look. 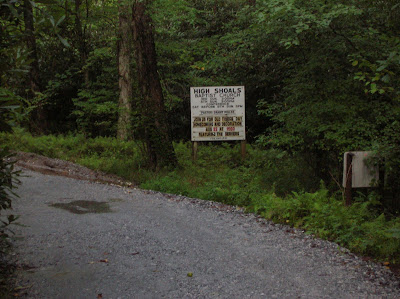 The pavement stopped just beyond the cottages, but the narrow, winding single-lane gravel road continued for another mile and a half. At the end of the road is a small, beautiful church, at 2733 feet elevation, probably the highest point of the headwaters of the stream that makes up the falls, and a continuously flowing water fountain obviously powered by an artesian well.

As we stood and took photos, two sweaty young women bicycled up and dismounted near by. My wife commented on their stamina and ability to bicycle the hilly terrain only to find out Mary and Emma were also from Miami! Emma is also a yoga instructor, as is my wife, just to make the world a little bit smaller. 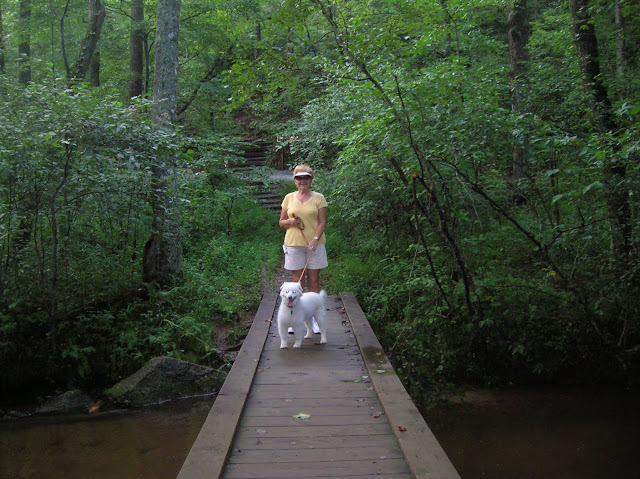 So, Miami has come to vacation at the end of civilization, the paved part of it at any rate, at the very beginning of the Appalachian Trail. I have no idea where the Parisians go in August, but trust me, I know where to find the Miamians! The stricken girl on the cat walk may have been another. It wouldn't surprise me in the least.


Next: Helen, Georgia, or if the Monkees can pull it off...  At
http://sleepstwo.blogspot.com/2010/09/metamorphosis-mickey-dolenz-member-of.html