Camped in the Georgia foothills next to a beautiful, serene lake that stretches for miles in either direction, we found ourselves still sitting in our little camping trailer with the air conditioning on at 7:00 pm in the evening. It was still 93 degrees outside, and the humidity was beyond even my level of endurance. I was raised in South Florida long before air-conditioning was installed in the public schools. No rank amateur am I when it comes to humidity. This vacation, however, was supposed to be a break from the heat and humidity at home. Nope, today it is ten degrees cooler in Florida than here! 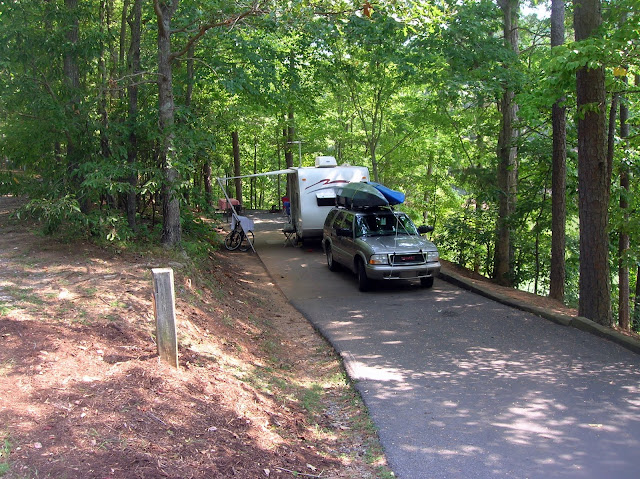 Getting up here from Florida was an adventure in itself, watching the temperatures in Atlanta hit 103 degrees, and again few miles further north in nearby Marietta when a local bank thermometer pegged at 104 degrees! The heat had enveloped all of the South, including our picturesque campsite only 50 miles further north. So, instead of kayaking the many coves of Carters Lake or bicycling the hilly campsite after getting settled in, we sat and relaxed and and collected our many thoughts about our first long-distance towing adventure.

Our first observation is never trust the voice commands on the GPS! The programmers who set up the instructions for turning obviously make the assumption that every straight-through instruction means stay in the left lane. The “Bear Left!” command, meant to take you straight through a cloverleaf, will unfortunately often take you up a flyover that really starts to the left but eventually swings back to the right and causes you to exit the route the GPS is trying to tell you to stay on! Always have a map handy and know where you are going before barreling into a spaghetti-bowl interchange that will confuse the GPS so badly you may as well be driving on the moon.

Secondly, the people who set up the Murphy Gas stations found at many Wal-Marts, must not drive cars. At least, not real ones. Besides the almost mandatory traffic jams because flow-design is non-existent, the last place you want to tow even a small, agile trailer is through the short, angular pump aprons at Murphy's. Even if you do get three cents a gallon off the posted price by using a Wal-Mart credit card, the aggravation of using Murphy gas simply isn't worth wondering if you are going to lose a corner of your precious, but fragile, RV.

Thirdly, have alternatives for everything! Alternative routes for travel as well as alternative activities for being confined to your camper when it is either blisteringly hot or pouring rain. Have alternative meals or food available, and pretend you can't communicate with anyone, because, often, you can't. If you don't have electric power, and you don't have a generator, make sure you have a way to recharge or replace a dead battery!

Next; George Carlin and the Perseids - musings while at Woodring Campground at
http://sleepstwo.blogspot.com/2010/09/george-carlin-and-perseids.html